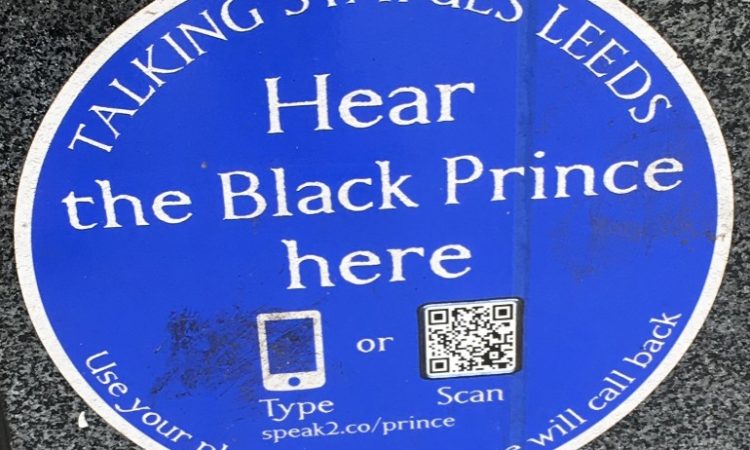 Should the big guy on the bronze horse in the middle of City Square be knocked off his pedestal? CHRIS GRAHAM argues it’s time The Black Prince was put out to pasture.

I am sure I am not the first person to have tried – and failed – to establish a link between the Black Prince Edward of Woodstock and the city of Leeds. Yet every time I emerge from the railway station on to City Square, there, disturbingly, is Thomas Brock’s monumental praise song in bronze to the Prince. Why?

This equestrian statue is not a thing of beauty; it is a piece of lumpish bombast, the figure of the armoured prince leaning back with arrogant hauteur and pointing (it’s rude to point) in such a way as to make it appear to visitors that they are the hated French enemy and are being invited quite unceremoniously to begone to Hunslet or Castleford or, preferably, the North Sea. Even Alfred Drury’s gorgeous nymphs can do little or nothing to lighten the drab, inhospitable heaviness weighing down upon the square from the imposing bully in the saddle.

I wish to begin an as-yet-half-baked campaign for its removal.

Removal, not demolition. I’m no iconoclast.

If the Black Prince (1330-1376) had enjoyed a reputation for kindness and magnanimity, or even for pleasure – a love, say, of the melodic outpourings of lutes and psalteries, or a taste for a Provençal troubadour’s lyrics – and had appeared without horse and sans cuirass and barbute, one might possibly have warmed to him. But the truth is he was a brutal, granite-hearted beast.

His theatre of cruelty was the Hundred Years War. He was notably duplicitous, cynically ignoring the medieval code of military honour in stark contradiction to the declaration on the plinth – surely an instance of highly burnished sarcasm – that the Black Prince was “the flower of England’s chivalry”.

On one occasion he butchered a thirteen-year old boy – the son of the commander of the fortress in the Breton port of Brest he was besieging. The child had been handed over to the Black Prince as a hostage against a temporary truce which had been agreed to allow both depleted sides to replenish arms and food. At the end of the truce, instead of returning the captive child as per the agreement, the splenetic Prince, furious that the fort had been restocked, his concurrence notwithstanding, had the boy killed.

An odd hero for a monument in Leeds.

Regarding the removal of the statue, I’m not suggesting it should be melted down or destroyed altogether but simply relocated – perhaps a retirement spent negotiating the gates which decorate the ring-road roundabout by the Crossgates Arndale Centre might be suitable?

There is a precedent for the re-siting of equestrian statuary. In Venice there is such a monument dating from the Renaissance, a marble paean to one Bartolommeo Colleoni commissioned from the Florentine sculptor Andrea del Verrochio. Colleoni was a typical 15th century Italian creature, a condottiere – a mercenary soldier who served the Venetian Republic, and certainly not one overcome with modesty. In his will (he died in 1475) he requested an equestrian monument be erected in his honour in front of the basilica in St Mark’s Square. The citizens were horrified, and the municipal government ordered the statue’s removal to an obscure campo on the city’s rim where it stands today.

Assuming the removal of the Black Prince, one or two supplementary questions arise – how to fill the space vacated, and what to do with Kenneth Armitage’s legs which, I suspect, were half-intended as a sort of tangential pun on Brock’s pompous prince.

Let the Armitage piece stand on its own five feet, but as for the vacated spot, perhaps the equestrian could be replaced by the pedestrian, some modern hero – Lee Bowyer perhaps, arm and hand outstretched like the Prince, making a dismissive single-fingered gesture in the direction of Manchester? Or by a velocipedian statue, a contemporary work created entirely from objets-trouvés recovered from the Leeds-Liverpool Canal, depicting a lycra-attired and goggled giant, athwart bicycle (no bell), glaring down on pedestrians who dare to step into the cycle lane at his feet? Or, maybe like the 4th plinth in Trafalgar Square?

But, no, that’s enough… The plinth has to go too.

Of course, the space could just be left empty. (There is by the way a little plaque on the pedestal with a q-code which will enable you to hear the Black Prince talking – presumably in his fluent medieval Norman. Alas my ancient Samsung lacks the necessary app so I can’t report back on this).