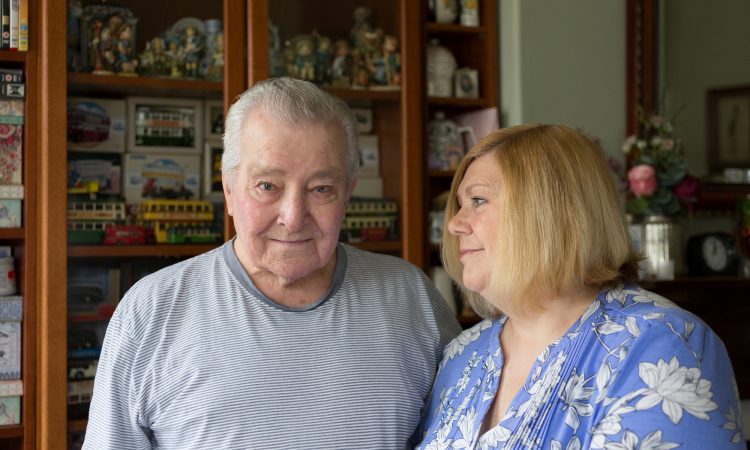 A revealing new exhibition of intimate portraits at Leeds City Museum marks the first forty years of St. Gemma’s Hospice. CEO KERRY JACKSON and photographer OLIVIA HEMINGWAY talk to NEIL MUDD about the importance of community and the everyday narratives of people’s lives…

2018 is a year of important anniversaries where the nation’s health is concerned: seventy years since the formation of the NHS; a half century since Britain’s first successful heart transplant operation; and can it really be forty years since Louise Brown became the original ‘test-tube baby?’

2018 marks another fortieth anniversary, that of St. Gemma’s Hospice which opened in Leeds to ‘meet the needs of terminally ill people, and those close to them, with care, compassion and skill.’ The charity is celebrating the occasion with 40 Faces of St. Gemma’s Hospice, an intimate and deeply affirmative photographic exhibition at Leeds City Museum.

“It’s an opportunity to reflect on the massive contribution that so many people have made to the life of St. Gemma’s,” says Kerry Jackson, who has been the charity’s CEO since 2010.

Formally launched at a public meeting in Leeds Town Hall in 1977, St. Gemma’s Hospice opened its doors to patients less than a year later. Today it is the largest of its kind in Yorkshire and formally recognised as a university teaching hospice for the quality of its research and training.

Its services continue to be provided free of charge to anyone who needs them, and the charity relies on donations, fundraising activities and its twenty three shops to provide over seventy per cent of its day to day running costs.

“There’s a whole community contribution to the running of St. Gemma’s every day,” explains Jackson, “but it’s much deeper than that. St. Gemma’s was set up as part of the local community and that people power accounts for the 40 Faces exhibition.”

The exhibition is the idea of Emily Clark, 40th Anniversary Manager at St. Gemma’s, who has worked closely with photographer Olivia Hemingway on the project. Characterised by her loose quotidian portraits of A-listers and ordinary folk alike, the Huddersfield-born photographer was a natural choice – every picture tells a story.

“This crossed over between being a personal job and a project,” Hemingway tells me when we meet at the exhibition’s opening event. Whether photographing Bjork, Corinne Bailey Rae or Madge, her beloved Grandmother, Hemingway shares a fascination with people’s everyday lives.

“Emily interviewed and I photographed,” she says. “We asked the participants to think of a location that meant something to each person and often that was their home. It’s lovely going into people’s houses because you get a sense of who they are.”

The two adopted a similar approach with staff. “We photographed Lisa, who works with patients using alternative therapies, in the garden with running water behind her because that’s sort of appropriate to what she does. Some people (like the nursing staff) were photographed on the wards to give a sense of the space itself and different aspects of the service (St. Gemma’s) provides.”

Most importantly, Hemingway was keen to focus on the people. “Every single person I met on the project was really warm and open to being represented in a natural, honest, relaxed (way) and I really wanted that.”

“I’m also really interested in healthcare (in 2017 Hemingway photographed actors Lena Headey, Jodie Whittaker and Sir Patrick Stewart in support of The Huddersfield Royal Infirmary) and in the use of images with text as well.”

“Emily had seen the HRI series and in a way we did a similar thing because there is a short story with the picture in the exhibition and there will be a longer story on the website so people can read more about particular individual’s stories.”

Forty years later it is still this community of individuals which remains massively important. The nature of that community may have changed in four decades, says Jackson, but the challenge remains how to meet the needs of the city’s evolving population.

One such area is the growing number of homeless in Leeds, a group whose life expectancy is nearly half that of the UK average. “Their lifestyle is so different from our usual patients that the care we give them, and the way we interact with them, needs to be different,” says Jackson. “Very often we need to go to them and be there when they need us, so it’s challenging.”

Last year the Office for National Statistics revealed that life expectancy for all people in the UK would rise less rapidly in future. Critics have pointed to savage cuts in health and social care spending since 2014 as the root cause, cuts which have seen the NHS struggling to cope with demands placed upon it. It is a worrying and backward step.

“Health is fragmented and social care is divorced from health in lots of ways,” says Jackson. “You’ve got hospital services, healthcare services and charitable services, and they don’t all overlap nearly as much as they should.  And then you bolt on social care and they’re just not joined up. We do have quite a long way to go as a city, but the city is talking about it and we’re headed in the right direction.”

The exhibition is a snapshot of what the charity means in Leeds, says Jackson. “One of our objectives, indeed one of our obligations, is to dispel some of the fears around dying and bereavement. To have put a normal person in our exhibition, (allows) a member of the public to connect with that and to realise that all these people are just like you and me.”

40 Faces of St. Gemma’s Hospice is an opportunity to celebrate and reflect upon the first forty years in the life of St Gemma’s Hospice. It is a success story in which the people of Leeds can take justifiable pride, but the genuine success stories are there on the walls of the City Museum. Go and say hello.