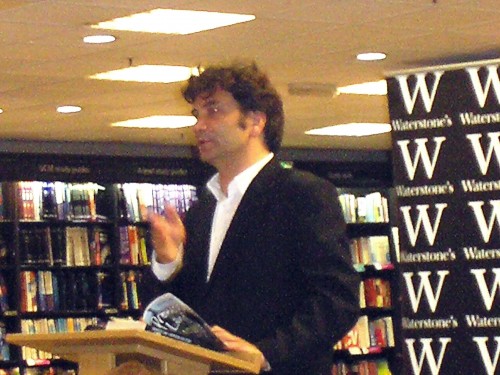 Guest blogger and local author Mick McCann finishes his trilogy on The Leeds Movement; this one’s mainly about Anthony Clavane . . .

My middle-son’s school prom means I’m on the bus, well I would have been if I hadn’t just watched it go, annoyingly early. Second or, more likely, third generations cruise Armley Town Street in open top, flash Audis, the cliché is blown away by the obvious, they just look so damned fine. Preened to perfection, as sharp as any Teddy Boy, early skin, mod, casual or even Bowie fan (no wait a minute….not that cool) from the previous decades. I want to be young, I want to be on the back seat of their convertible with bass re-arranging my bones. This is Leeds, in the year of Our Lord 2011.

I catch my image in the bus window, old and tired, and reflect that while I seemed to have got a reputation as ‘real, authentic Leeds’ in some quarters, I’m actually only second generation Leeds – although the city’s name is etched onto my bones. On my father’s male side I’m probably third generation British, although my mother’s side has been traced back to 1730s Wakefield. I could hardly understand 50% of my grandmas utterances…..I wish I’d written some down but my child’s mind didn’t recognise the gems filtering through my lug’oles and lodging in the middle as some weird foreign language.

I’ve set this particular scene a couple of times in previous blogs but for any of you who missed it, or have been taking too many drugs, it’s an evening of discussion between Ian Mc Millan and Anthony Clavane to launch the paperback edition of Anthony’s award winning Promised Land. There is too much to report so I’ve turned it into a three-parter and this final part is more concerned with Anthony and his writing.

Waterstones is buzzing. Early on Anthony makes me cringe, injecting me with an urge to step up to the lectern in front of the throng and give him a big hug. Anthony’s is a good man who I have as much time for as he needs and now I worry that I’ve offended him. He got a laugh with his quote from How Leeds Changed The World that he’s ‘too posh’ to come from Leeds but I detect a note of sadness, maybe even exclusion. Perhaps he’s forgotten the conversation in which he explained to me how he’d been regularly made to feel that way, maybe we’d simply drunk too much beer. Surely he hasn’t missed the irony laced intention of the entry, no-one decides who is and isn’t ‘real’ ‘Leeds’ and although I’m with Tony Harrison in loving and defending local accents, a Leeds drawl is not a prerequisite to being ‘Leeds’. You don’t measure authenticity by accent. My accent swings – when I was working on building sites it thickened, when in an office it waned. It wasn’t a decision, it just happened.

In discussing his Jewish heritage Anthony mentions three generations buried in a cemetery overlooking Elland Road (going back to his family’s arrival in 1860) and opens up something crucial about the city, it was built on newcomers. It always was and, as Britain’s fastest growing city, it still is. I love incomers, be they Latvian or even Southerners (don’t tell anyone I said that) they often bring a drive, vitality and refreshing new perspective and if they think of themselves as (to whatever extent) ‘Leeds’, so do I. At the turn of the last century Leeds had the biggest Jewish community outside London, many of these people powered the city’s prosperity through the 20th Century and Promised Land is infused with much of this history.

An audience member asks a corker of a question. ‘How did you sell the idea of the book to publishers?’ Anthony pauses, he hasn’t been asked that before, and replies ‘The Damned United….they wanted less Leeds writers, less Jewish history, less about the rise of the ‘Northern Man’ and more Leeds United.’ A football team with fans passionate enough to support over 300 books on the team and when one hits the mark….well, they could fire sales into hundreds of thousands. As he says it I consider that that’s probably all his publishers know of Leeds, some weird, northern backwater with a football team. (Not sure if I’ve mentioned this before but maybe we should learn to flog our city.)

In a market flooded with Leeds United books Anthony explains how the publishers slowly grasped that it was exactly what they didn’t want – the Leeds history and wider social and cultural context – that appealed to the reviewers and readers and propelled the sales. A realisation explodes, water-bomb in my face….they wanted less identity, ‘why would readers be interested in those people?’ This sudden connection fires a reflex snort at the publisher’s ignorance and stupidity; it’s exactly this expansion, this evolution that makes Promised Land special, it’s the essence of the book….you fools.

I lean back in my chair, smug as a Heron in an un-netted fish-pond as Anthony warms to the issue. He points to the new paperback edition. It has been ‘rebranded’, the new cover – in comparison to the old – shifting the emphasis away from Leeds United, the new sub-title A Northern Love Story replacing The Reinvention of Leeds United. All this is not to say that the book isn’t laced with LUFC and of interest to Leeds fans but going beyond the football opens it up to people with no interest in the sport and perhaps gives them some understanding of the passion. Ian Mc Millan emphasises this by reporting that his football disinterested wife loved Promised Land, it left a mark.

Again the audience lead us down an orchard path asking ‘what’s next’? Anthony’s eyes light up – this is new and exciting – as he talks about his next project, the hidden history of Jewish participation in English football. Anthony’s giddy exuberance shows this will also be expansive, incorporating wider Jewish and English history and including how Britain absorbed the immigrant community.

His research has already thrown up a Leeds nugget. United’s pre-war defender Lesley Goldberg was the first Jew to play for England schoolboys. Without the interjection of World War II he would have probably gone onto be England’s first Jewish, full international. Shockingly, to this date he would have been the only one, although both David Beckham and George Cohen had Jewish Grandfathers. After WW II Leeds sold him to Reading and due to anti-semitism Lesley changed his surname to Gaunt.

Towards the end of the discussion Anthony throws in that he’s interested in setting up a Leeds Literary Festival, a large, central one that may underline Leeds on a map. Later in the evening he’ll discuss the idea with other interested parties. Although I doubt he’ll have the time to make it happen, he’s thrown the idea out there so you never know and it’s a fabulous dream.

I spose with this being the end of the last of a trilogy I should conclude, bring about some kind of resolution but although, were you to meet me, it’s probably the last adjective you’d use to describe me, I’m right sophisticated me…..I’ve read Paul Auster.