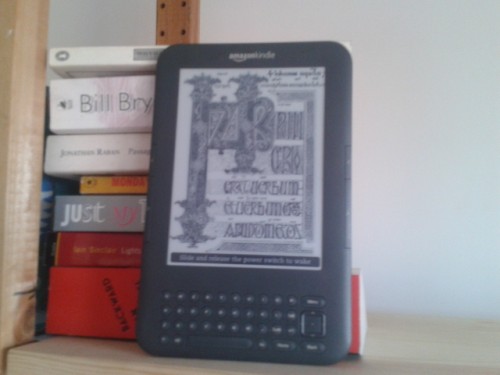 Has it ever struck you that you never see a bookshelf half empty? There always seems to be enough books to go right the way to the end, stacked shoulder to shoulder, neat and tight and regular as a North Korean spontaneous celebration of the supreme leader. Isn’t there something iffy about that?

My own history with bookshelves is relatively brief. We never had any as a kid. Simply no need. The only books I ever saw were the rent book – a limp, ashen, scruffy thing but still an object of dread and fear – and the numerous log books for the cars dad would end up bringing home after his regular monthly outing to the auction at the greyhound track, and they were hidden away in the kitchen drawer along with the only book mum ever enthused about; the one with the Green Shield stamps.

As an adult I always inclined to the Thomas de Quincey – one of my literary heroes – school of interior design, “at home in a German ocean of literature, in a storm, flooding all the floor, the tables, and the chairs — billows of books …” The only times I conceded to what I considered an unnecessary affectation were generally to comply with the demands of a better brought up better half – and as I have always endeavoured to an upwardly mobile romantic life this has happened more frequently than would otherwise be normal if left to my own devices

Shelves to me have always seemed to spring directly from the strictures of the superego, the voice of the nanny state inside our head, the part that says “careful now”, and “don’t make a mess”, and “you can have too much of a good thing you know.” My library is rather more libidinous, id-like, a polymorphous paean to the pleasure of print. Shelves appeal to the straight jacket side of our nature. Books should make you dream, not dust. Dance, not catalogue.

I’m not being entirely facetious. I’ve just been reading a book about Edward Bernays, the so called “father of spin,” a fascinating fellow, he single handedly invented the field of Public relations and was behind a fair few major events of the last century, including the overthrow of a couple of democratically elected governments in Central America. He also massively influenced Goebbels’ views about propaganda . . . though he wasn’t all bad and was involved in some progressive campaigns too. Such as, erm, making it socially acceptable for women to smoke. And he was Sigmund Freud’s son in law – hence my overstrained psychoanalytical metaphors.

When he wasn’t involved in dastardly machinations against the good of humanity he hired himself out as a consultant to some of the biggest companies in America. During the Wall Street Crash he was working for a consortium of major publishers. They were worried that books weren’t shifting in an economic crisis and they wanted to know how to get the great American reading public to consume more product. Bernays’ solution was elegant and brilliant; “Where there are bookshelves,” he reasoned, “there will be books.”

Bernays cajoled a bunch of celebrities to bang on about the importance of books to civilisation – whether they had read a book in their entire life was irrelevant – and persuaded architects, contractors, decorators to consider the shelf as a kind of private shrine to the culture of print

These days acquiring books and displaying them in our homes seems like normal behaviour – at least for that section of society that can afford to indulge. Before the war though it seems that not many people collected books as a central manifestation of their desire to conspicuously consume. We had to be indoctrinated into the correct manner of keeping these strange commodities. The lifestyle gurus and Saturday supplements of the thirties got busy finding ways to persuade the public that shelves were sexy. There ended up being such an oversupply of shelving that some entrepreneurial types invented the so called mimic book, which was basically a sheet of card printed to look like a row of hardbacks. You could buy the stuff a at the equivalent of Ikea. They sold it by the yard. It was a big seller for years, apparently. Empty shelves were such a social stigma that people preferred a pointless and ridiculous substitute so they wouldn’t have to face the anxiety of not appearing to own the latest edition of Upton Sinclair.

Bernays other intervention in the history of book publishing is even more amusing. The book industry in the thirties was facing a crisis of overproduction. Until the end of the Nineteenth Century American publishers were frankly nothing more than pirates; America refused to recognise international copyright and turned a blind eye to blatant thievery of European intellectual property. Things had stabilised by the twenties owing to the Copyright Act of 1891. But by the time of the Wall St crash a new breed of brash new publishers were challenging the now respectable old businesses, flooding the market with cheap “dollar books.” Bernays was called in. He devised a two-pronged strategy: first, “to convince the public and the price cutting publishers that dollar books were not in the public interest”; and, second, to “increase the market for good books.”

Bernays invented a spurious but serious sounding think tank, the Book Publishers Research Institute, which pumped out reports and papers proving that cheap books would inaugurate the apocalypse of civilisation as we know it, and result in the “death of six thousand book retailers.”

Then he devised a contest. In the spring of 1931 his institute sponsored a contest “to look for a pejorative word for the book borrower, the wretch who raised hell with book sales and deprived authors of earned royalties,” thus demonising anyone who circulated content without the consent of the publisher (anyone following the SOPA shenanigans will recognise this is not a new concern in a commodified culture.) Bernays had pinched the idea from another campaign that had hit America a few years previously, when the rather marvellous word “scofflaw” had been coined to refer to drinkers of illegal booze (scoffing at prohibition!) Bernays assembled a gaggle of recognisable book types – the equivalent of Mark Lawson, Germaine Greer. Tom Paulin today – to judge the thousands of submissions. Some of the words are deliciously daft; “book weevil”, “borrocole”, “greader”, “libracide”, “booklooter”, “bookbum”, “bookaneer”, “greeper”, “blifter”, “biblioaquisiac”, “book buzzard”. The eventual winner was “book sneak”. It never really took off. What made me chuckle, and the reason I’m writing this – if there has to be a reason – is that a runner up in a competition to come up with a term to stigmatise the people who shared books and the custom of circulating printed material among friends, family, colleagues and acquaintances, was . . . Culture Vulture.