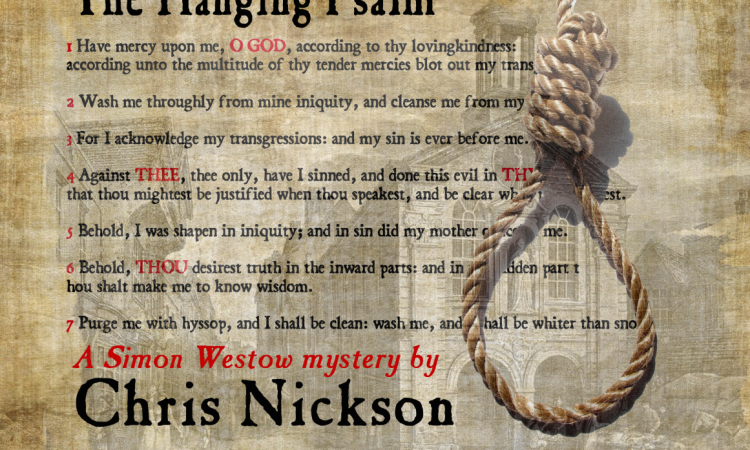 Following on from his previous collections The Richard Nottingham Mysteries and The Inspector Tom Harper Mysteries, Chris Nickson has a new series and a new detective type for us in the shape of Simon Westow.

This first tale of The Simon Westow Mysteries, The Hanging Psalm, introduces thief-taker Westow as a man with a fire in his belly that feeds on past pains, a strong moral compass and keen opinions on the rich – but the story is essentially about seeking justice while saving your skin.

Set in Regency Leeds, a time when class and wealth too often define or compromise law, the services of Westow are often required – those with goods worth stealing want those goods returned, and if the lawmakers are too busy sitting in comfortable rooms with high fires in the crate, then it falls to a thief-taker to do the hunting. Simon is offered an unusual case: finding a kind of ‘property’ very particular to eras past – the rich daughter of a factory owner. In tracking down this valuable item, Simon finds himself entangled with a ghost from the past and a game of cat and mouse ensues; skilled as Simon is when it comes to getting his intelligence by coin or by threat, he has his work cut out for him this time. Yet while others seek justice in their own special way, Simon is determined to make criminals pay by the book; making sure that the right people hear the Hanging Psalm when it’s their time…

Nickson doesn’t simply offer the linear narrative of one protagonist. We’re offered something of a dual-narrative, which switches without warning or marker between Simon and his assistant. Jane is a troubled soul with a vague past – a shapeless past which is laboured on in all its non-specificity to ensure that we recognise her as an additional source of intrigue. She’s also vulnerable enough to inspire wary emotional investment in someone simultaneously fragile and lethal.

This narrative structure allows for some depth and interesting shifts in perspective as the attitudes and intentions of Simon and Jane merge and contradict, but there are times when the fluidity of these shifts falters and we’re forced to backtrack to pinpoint precisely when the focus, time or setting changed. Simon’s wife Rosie is also on board and although neither Simon nor Rosie have Jane’s gift for sniffing out watchers and predators, the pair make an impressive team of thief-takers, one as the brains and the other as the brute enforcer. Though in truth Simon lacks the brutality clearly needed to truly excel in his line of work.

Nickson’s dramatic intensity of characterisation leads him to write in a darkly brooding tone throughout. Simon is a hound on the scent of one man’s problem, but he has his own grievances to carry around too. Regency Leeds appears in much the same hues; thieves both poor and rich take their advantages where they can, hired criminals are as common as the rats, and if you’re unlucky enough to be a woman it’s total possession, rape, murder, murdering or prostitution for you – all playing nicely into the period crime mystery genre.

The most problematic aspect of the novel for me however is the pre-occupation with signposting Leeds. It’s hardly ever just a trip to a local establishment, it’s a litany of road names and too often something resembling directions – likely enticing for a local, but a little onerous for the rest of us! I’m all for painting a scene or a journey with clarity but at times it feels very much like Nickson is harbouring a secret wish that his work will inspire super-fans to set up a walking tour at some point in the future…

The Hanging Psalm has much to offer lovers of mysteries and period fiction alike; characters are well drawn and the story itself is suitably dotted with twists, although I do maintain that those twists are not uniformly well delivered or conceived, with some of them leaning on old-hat tropes of deception and misunderstanding. Regardless, Nickson conjures the streets of Leeds in a bygone time in vivid detail and manages to craft two distinct protagonists, each with their own pasts, torments and beliefs in a narrative which certainly engages, even if it doesn’t quite manage to grip us by the throat and force our fingers to keep the pages turning.

ELIZA HAYWARD is a Yorkshire based blogger interested in all things theatre and the arts, now infiltrating the land of Leeds culture. She’s the voice behind the most excellent Always Time For Theatre, and you’ll probably bump into her at the press bar at Leeds Grand Theatre.