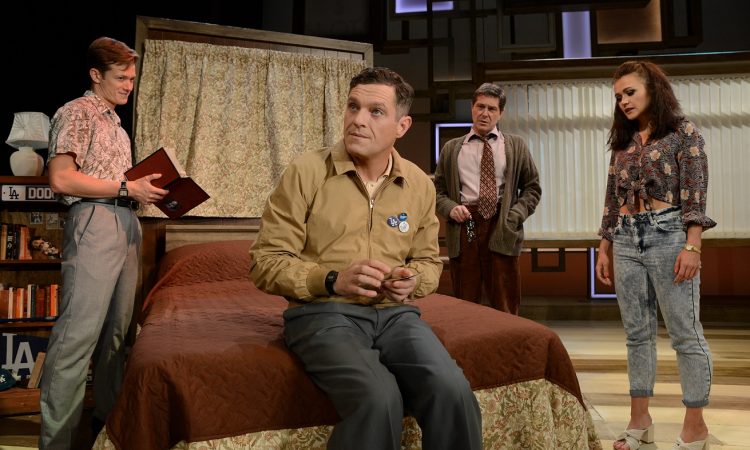 The CLASSIC SCREEN TO STAGE THEATRE COMPANY brings their production of RAIN MAN to THE GRAND THEATRE. NATHALIE TOLMIE-THOMSON reviews the adaptation of the 1988 film, performances of the cast, and the portrayal of autism from the perspective of someone with the same condition as its protagonist.

Anyone who saw Rain Man in its original film format in 1988 or seen it since at home are probably aware that there are generally mixed feelings about the way in which autism is portrayed, and the way in which it is used as a narrative device that drives the plot, so to see it being reproduced for the stage was too interesting an opportunity to pass up. Especially considering the fact that I was recently diagnosed with Autism Spectrum Disorder (ASD).

For a Monday evening, the turn out for the Classic Screen to Stage production’s opening night was pretty decent and at that point nobody in the audience knew what they were in for apart from the understated grey set curtain featuring in the centre RAIN MAN on a number plate within an empty wooden frame. It became clear very quickly however that we were about to witness a carbon copy commercial production as soon as the opening scene burst to life at Charlie’s dealership with Susan and Lucy frantically manning the phones in that debasing office girl stereotype fashion seemingly reserved for quintessential movies of the 1980s.

I should probably point out here that I’ve not actually seen the film, so I went in blind, although my partner regularly confirmed how to the letter the dialogue was to its silver-screen predecessor. And not just the dialogue, I have to say that this was the first theatrical sex scene I’ve encountered although perhaps I should count my blessings that it was only 20 seconds of missionary style fumbling that we had to endure before Matthew Horne as Raymond saves the day by standing over the bed, gauchely imitating Susan’s passionate moaning.

The problem with film to theatre productions such as this, where the producers, writers, cast and crew have remained too faithful to the original, is that tropes that may have been acceptable in the context of 1980’s arrogance do not age well. It was disappointing that there was a real opportunity to update Rain Man’s usage of women, so that they were not merely shrill and powerless accessories for the male protagonists to bounce off – the acting talents of both Elizabeth Carter who plays Susan and Mairi Barclay may have been wasted in such reduced roles. And of course, there is the issue of the way that autism is portrayed.

The character of Raymond is described as being retarded, disabled, high-functioning, a savant, autistic, incapable and ill at various points throughout the play by pretty much all cast members he interacts with. Judging by his behaviour he seems relatively low functioning in his inability to cope with unpredictable situations and any change of circumstance – the constant rocking back and forth is known in the autistic community as ‘stimming’, a soothing repetitive behaviour that acts as a sensory foundation when otherwise overloaded by stimuli. Savant syndrome, or the ability to absorb large amounts of information in great detail, which Raymond has along with his autism is in actuality a rarity, and Kim Peek who inspired the movie is a savant but does not have autism.

I do not believe reproducing misinformed representations of neuroatypicality, which is thought to affect one in every hundred people, is helpful when misunderstanding about ASD (Autistic Spectrum Disorder) amongst the general public is still widespread. Horne’s portrayal of Raymond was spectacularly done and demonstrated a really committed transformation into his character maintained right up until the end when he frightened the life out of me by stepping jarringly out of his autistic persona to receive a standing ovation, when just ten minutes before the audience were belly-laughing at the shortcomings of him with a disability – sounds pretty gross when you put it like that doesn’t it?

For the acting, Horne and the rest of the cast deserved their applause, if you discount the generic American accent that the mostly British cast slipped in and out of, but Oscar-winning or not these actors carry the responsibility of fairly representing a figure who perhaps shouldn’t be made a spectacle of at all.

Something I did love about this production was the set design and wardrobe, very minimalist and tasteful examples of design excellence from an era that is known now as a defining era of tackiness. The pared-down setting and simple use of 80’s chart-topping bangers to allow for scenes to be changed by stylish silhouettes garbed as appropriately as the furniture they were pushing off-stage, even the simple window/billboard display in the background was an effective use of colour, lighting and signposting that altered according to whether they were at the dealership or in a Las Vegas casino. These small but effective details allowed for the dialogue to take priority and of course out of respect for the powerful and vividly debilitating performance of Raymond.

The production on stage cannot be entirely blamed for the limitations that a film from a more naïve generation produced. And the story is loved by audiences all over the world for the love that develops between two brothers now as it was when it first came out, and for Charlie’s growing as a person as he comes to understand autism and what it is to be a good person in classic moralistic fashion. Again very typical of that era.

So, it makes sense that it has made its way onto the stage, especially as the Classic Screen to Stage Theatre Company appear to have created an entire franchise out of such transpositions. However, as the subject matter of the story is so sensitive the producers could have afforded to be more attentive to the way ASD is performed and understood, to contribute something new and original by updating audience understanding, just as the movie was trying to in 1988, (…although the film ends with Raymond being re-institutionalised even though Charlie becomes convinced he doesn’t belong there so how noble is that really?)