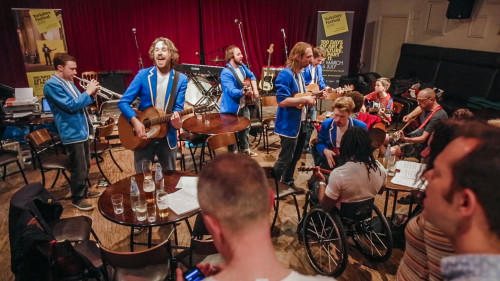 The Tour of Infinite Possibility has always been project with numbers. Lots of numbers: 12 gigs. 12 towns. 2 weekends. 4 days. 1 cycle-powered stage.

A few months in and there are even more numbers. And they got bigger…..

Over the last few months Leeds band Hope & Social have been working hard with the lovely Yorkshire communities along the route of the Grand Départ. The band have been rocking schools, pubs and music centres across Yorkshire through a series of recruitment gigs and music workshops, with individuals and community groups, and a session with a ladies roller derby team thrown in for good measure!

There are now 1300 members of A Band Anyone Can Join – people of all ages and musical abilities – and they are almost ready to embark on The Tour of Infinite Possibility – a Yorkshire Festival 2014 project, by Hope & Social with Grassington Festival. 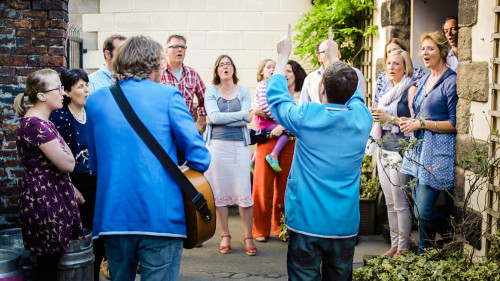 Over two weekends in June A Band Anyone Can Join is heading to the following towns, along the route of the Grand Départ:

So, the band may have all aged about a decade in the last couple of months and if Ed has to pivot one more spreadsheet table he may actually cry, but the workshop sessions have been fantastic. Really fantastic. Some may well see the gigs as the focal point of the project but in fact, for the band, the workshops are what it’s all about. The euphoria from the workshops may even have kept Hope & Social sane in recent weeks.

Frontman Si Wainwright explains:
“Turning up in Masham on a very sleepy bank holiday Monday, tired, broken and smelly directly off the back of a week of Bring the Happy in Brighton to be greeted by 3 clarinet players, 3 violin players, 2 guitarists and a load of singers; all armed with music, smiles and ready to give it their all. An hour later we’re playing as a band and everyone’s beaming. BEAMING. Ed and I were quite literally saved by their music making that night.

Or heading over to Otley to a school group of 150 6-10 year olds. Strumming the first few bars of The Big Wide and then all 150 crashing in on the first word and singing the whole thing beginning to end without a single prompt.

Or Rich excitedly telling us of the Uke Orchestra who have TOTALLY NAILED Rolling Sideways and even customized it to be entirely their own. Or the Roller Derby girls going from what sounded like a bag of rubber bands being plucked to an in-tune, in-time Ukulele group in the space of an hour.”

There are lots more stories like this, all of which slowly peel away the sometimes weary, often admin-clad exterior of this project, revealing the glowing, healthy, heart-warming gorgeousness that sits deep inside.

And so we find ourselves here with only days left to go and as the band battle on despite their ever failing immune systems… and the project team continue to frown, like, a LOT.. if we’re all completely honest, we’re very bloody excited.

Bring on The Tour of Infinite Possibility. And the Berocca.

Information and free gig tickets are available at www.hopeandsocial.com/tip.