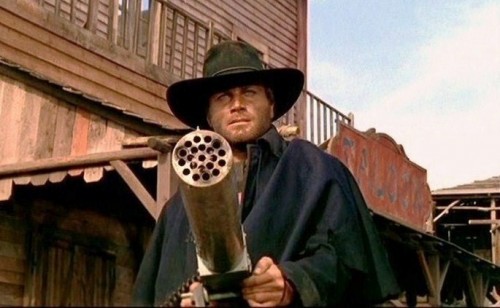 The Plaza Cinema manager Mike McKenny (@DestroyApathy) gives us a round-up of his day at the Leeds International Film Festival.

My day of sampling some of the retrospective offerings of LIFF’s Fanomenon strand was much more a session in satisfying historical curiosities than it was about seeing concise cinematic storytelling.

The three films, which I saw back to back at the sublime Hyde Park Picture House, included a cinematic legend in Sergio Corbucci’s 1966 Spaghetti Western Django, followed by an example of how the success of this breakout hit was exploited by others, in this case by Giulio Questi with Django Kill from a year later. Then, a slight change of period and setting – yet with many common features – the North Korean/Japanese co-production from the 1997 Somi the Taekwon-Do Woman.

Out of the three, it was Django that stood out as the most competent. The firm placing of the camera and the steady, patient editing were as sure-footed and confident as the burning gaze of the film’s protagonist, the titular Django. The film violently erupts with machismo, as women fall all over this model of masculinity and bodies stack up into possibly triple figures.

This archetypal antihero mysteriously wanders into the narrative, always dragging with him a coffin. Set post-Civil War, he is identified as a Yankee from the North, and places himself in the middle of the warring gangs of Confederates and Mexicans near the border. With ambiguous motives, Django exploits existing animosity, warping it in his favour in order to make a big ‘score’, planning to use the stolen gold to buy himself a new life.

Although masterfully constructed in a satisfying manner, the film is put together very conventionally, so comes across as more solid than inspiring. But this has to be put into the context of its historical significance; situating it as the highly influential piece of cinema that it was to become, evidences that it was in fact much more inspiring upon its release.

Where Django was solid, yet not so imaginative, Django Kill went completely in the opposite direction. There was nothing ‘solid’ about the script, the character motivations, the crazy drunken talking parrot, or the intensely homo-eroticised posse of gang-raping cowboys. Yet, there was some genuine experimentation in both form and content. This surreal, gothic take on the revenge western saw the half Mexican protagonist, frequently referred to as ‘half breed’, seemingly raise from the dead following his execution at the hands of a double crossing bunch of outlaws after pulling off a heist at the beginning  of the film. Experimental camerawork and haunting music play on this surreal premise, as the film strives to unravel, attack or deconstruct the concise masculinity presented in Django, commenting on the damage caused by such suppressed masculinity. As the film’s structure increasingly unravels in the final third, the film’s eccentricities become more important to any enjoyment taken from the film. One of these deistinctive eccentricities was some enjoyably vicious violence. So vicious in fact that the dubbed print reverted to subtitles for these scenes, as I’m presuming they were censored in the original English language prints and has since been placed in sequence, but using the surviving Italian print.

The film’s title is a clearly crass exploitation of the success of the original Django, having no formal ties to that film, and not even including a character named Django. There are, although, thematic characteristics that the two films share. Both utilise the mythical nature of the lone gunman antihero, whose motivations are ambiguous and mostly surround the individualistic capitalist desire to get rich or die trying. Similarly, another common characteristic is that both films use this desire for riches to ultimately postulate such a desire is self-destructive and corrosive; hence, in both films, gold acts much more as a curse that is placed upon its bearer, than an easy route to a brighter life.

Left with plenty to stew over with respect to what I had just witnessed, it was difficult to get into Somi the Taekwon-Do Woman, and with the martial arts in the film being the greatest appeal, it was disappointing to see that these scenes were too few and far between and had only mediocre use of choreography. So I left before the end in order to get home to see my son before his bedtime.

There’s loads more coming up at LIFF, including the Anime Day this Sunday, and the impressive line-up of short films in various packages as part of the festival’s Short Film City. The World Animation Competition and International Short Film Completion are always displays of the most creative global cinema. And this year will be even more spectacular because it is the first year that these competitions are now qualifiers for both Oscar and BAFTA consideration. I’ll be watching all sixty shorts in these two competitions in my capacity as International Jury member, and couldn’t be looking forward to them more. But it’s going to be a really tough job to get down to the winners.

Mike can be found on Twitter at @DestroyApathy. He is currently overseeing the restoration project at The Plaza Cinema (@ThePlaza_BD7) in Bradford and sits on the Enjoy strand of Bradford City of Film. He is also treasurer and committee member of Award Winning Leeds based film society Minicine (@MinicineYorks)