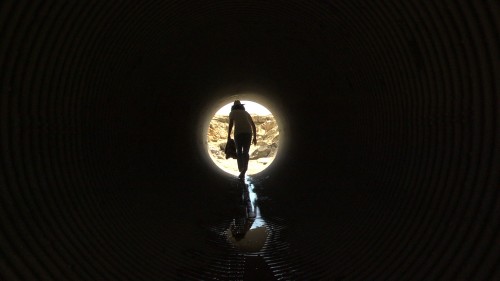 So it’s half way through the Bradford International Film Festival and Culture Vulture blogger James Voller (@James_Voller) has been one busy bunny. He’s seen plenty of films and sent in some very eloquent mini-reviews. Sounds like a wonderfully eclectic mix.
Some of the films are playing again during the festival, some will be available on limited release later in the year, whereas some, criminally, may not reach many cinemas on these shores. It is for this reason that film festivals are so imperative to us cinephiles that don’t just want to see what is offered to us on a regular weekly basis. (Image above taken from Intro)

Intro is a documentary that follows American musician David Williams as he travels and plays a number of small shows. What makes this so interesting though is that it’s not a conventional documentary. There are no interviews and very little dialogue; it looks like a home video. It looks like the director has said to Williams “Just go about your life and forget I’m here” and it works so well; we are seeing a real man living his everyday life. It is shot beautifully and is so relaxing to watch thanks to Williams’ music and the impressive visuals of the film.

Flying Pigs is Poland’s version of Green Street. The film follows the fans of a football team who have just been relegated to the second division. All of a sudden a wealthy businessman buys some of the fans to support his new team. Love, honour and respect is put to the test when the two teams, and the two sets of fans come face to face in the second game of the season.

The film is good, it has likable characters and a good storyline, but sadly it is missing the passion that football films, like Green Street, contain.

I could tell Angels of Portbou was going to be good from the opening shot. A long take of a train arriving at a small train station, people getting off and then the train leaves, leaving us alone with Serafin who is following the footsteps of Walter Benjamin. The short film has some of the best cinematography I have seen recently and on a whole, the visual look of the film is stunning. The film focuses on only two main characters, but the strong performances of the actors make this a joy to watch.  The strongest achievement this film has though, is the fact that it does not feel like a film; it’s extremely believable which makes it feel like a home video. It is pretty much everything a film should be and has everything a film should contain.

Moscow Diary also follows the footsteps of Walter Benjamin, this time in Moscow. This film was shot entirely on a mobile phone for two main reasons explains director Adam Kossof who held a Q+A after the film: “I wanted to film it on a mobile phone to explore the link we have with technology and how we see the world through moving image, and it was easier to film in some places that I may not of been able to film in with a film camera”. The film consists of a voiceover, reading from Benjamin’s diary and various shots of Moscow from the mobile phone. One problem with the film is the close up shots sometimes looked a bit pixelated.

This double bill plays BIFF again at 1:30pm on Thursday 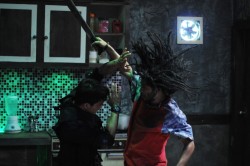 The Raid has a simple story: An elite team of police is sent to carry out a raid on a high rise tower block and take down a notorious crime lord that lives on the 15th floor.

The Raid is not just one of the best action films of recent years; it is up there as one of the best action films ever made. A bold statement but one it thoroughly deserves. It has everything a good action film should have, amazing fight scenes, a simple story and it’s funny in small doses, but this works perfectly. The music, composed by Linkin Park’s Mike Shinoda, is a perfect ally to the visual look of the film. In short: You have to see this film.

The Raid plays BIFF again on Saturday at 8.40pm

Ti West’s latest outing to the horror genre is a creepy, eerie but brilliant ghost story: The Innkeepers. The film is a little bit slow at the beginning, but no fear, it does get better and scarier… a lot scarier. A fantastic cast with a fantastic director makes for a perfect combination. The ghost, once seen, is terrifying and it is jam packed with jump scares which have recently been overused in the horror genre, but West uses them to perfection. The music is excellent and catchy and adds to the eerie atmosphere that the film creates.

Juan of the Dead is Cuba’s first zombie film. Residents of Cuba leave the island after a zombie break out. Juan and his small gang of lowlife crooks stay and set up a zombie killing business. “Hello Juan of the Dead, we kill your loved ones, how can we help?”

Juan of the Dead contained some bad special effects, especially a scene underwater; it was an interesting idea, but the arrival of a shark does not look good. A helicopter crashes into a building later in the film and that also looks disappointing. The film is funny in small doses but unfortunately the script failed to deliver.

The main problem I have with this film is there seemed to be no character growth. Yes they are trying to stay alive in the zombie outbreak but they did not seem to have any personal development and the arrival of an English speaking character seemed unnecessary. Credit where credit is due though, it does contain some of the best zombie kills in any zombie film. It also has an interesting ending which you may not be expecting, but an interesting ending does not save a bad film. The film is worth seeing if you’re a zombie fan and it does have some fantastic closing credits. 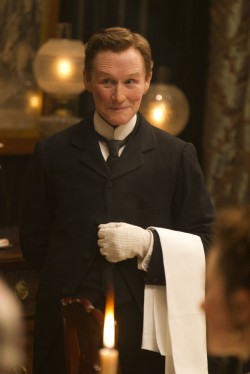 Albert Nobbs is a charming tale of a woman trying to survive in a male dominated, 19th century Ireland. Glenn Close gives the performance of a lifetime as the titular character who works as a waiter in a hotel in Dublin, but she dreams of owning her own little shop. The fact that Albert Nobbs is a women dressed up as a man makes Close’s performance even more staggering. The whole cast is fantastic, along with Close, Aaron (Kick-Ass) Johnson adds drunken Irishman to an ever growing list of characters that he can play and make it look easy. One particular scene that stands out is a scene towards the end in which the two female leads that are pretending to be men in the film, go out dressed as women, a moving and beautiful scene. Albert Nobbs was a pleasant surprise and a wonderful piece of story-telling. The ending may even bring a tear to your eye.

A man is found dead in a small Cornwall village with mysterious Python like bite marks in his neck. His brother inherits the cottage and moves in. Suddenly another body is found, same circumstances and this prompts our lead character, his wife and the local pub owner to start investigating the mysterious deaths the locals call The Black Deaths.

Classic Hammer Horror The Reptile really made me think about how much the horror genre has changed in the last 30 years. The reptile is not to be considered a bad film just because it is an old film; it’s a wonderful film and has all the conventions to make a good horror film with three main points: A simple but fun narrative, a good scare every now and then and finally believable (if sometimes overacted) likeable characters.

Screened before The Reptile was short film Ella starring Anthony Head as a father who has lost his wife and is now hunting her killer and his daughter, who are actually the same person. A very impressive piece of film that even managed to make me (A die hard horror fan) jump a few times.

Ella perfectly juxtaposes with The Reptile. After all this is what Bradford After Dark, BIFF’s horror section, is all about, showcasing classic British horror films with up and coming horror talent.

The Reptile + Ella plays at BIFF again on Saturday at 6:55pm @ Cineworld Bradford