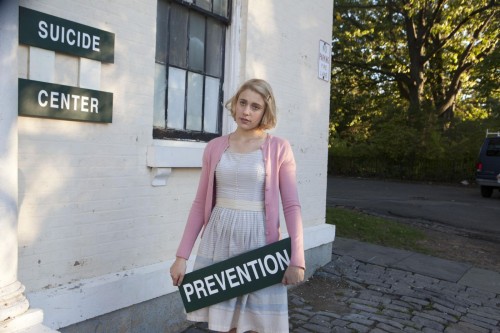 Last night saw the opening gala of the Bradford International Film Festival (#BIFFest), and what a delightful event it was. Moving away from the red carpet, black tie theme of previous years, something that I’ve always felt showed a falsity of Bradford trying to be something that it isn’t, rather than being confident in its own skin, doing things its own way. Well the perfect remedy to this was the fun atmosphere created by the inventive touches put in place to complement the film, including tap dancers and a suicide prevention centre, along with free donuts and coffee – which all makes perfect sense once you see the film. This helped to provide a much different and more enjoyable evening, still full of the glitziness you’d expect at a launch of an international film festival, just minus the forced pretensions of the black tie aesthetic. The temporary Black Sheep Brewery bar that will be there for the duration of the festival certainly helped!

The opening words from co-directors Neil Young and Tom Vincent perfectly mirrored what I say above about giving a much more earnest representation of Bradford, as opposed to a false rhetoric of grandeur. As a born and bred Bradfordian, well aware – admittedly naively – of a seeming cultural renaissance in this wonderful city, the statements were admirably humble, referring to Bradford ‘speaking to itself’. This is precisely what Bradford needs to do; hold its head high, but prove organically, with actions rather than words, that it has a very specific place in the global cultural calendar, thus proving its stature as an international ‘City of Film’.

After these short and sweet introductions, and the charming short animation One Froggy Evening, taken from BIFF’s Chuck Jones tribute, they handed over to a personalised video introduction from Damsels in Distress director Whit Stillman, who gave special mention to the importance of BIFF’s very unique Uncharted States of America strand, urging those in attendance to attend as much of the strand as possible. In order to prove its importance, finding the talent of the future, he used the example of Damsels in Distress star Greta Gerwig having featured in the low-fi indie Yeast, which played the strand in 2009.

As for the film itself, there is an eloquent short review below from James Voller, but my brief thoughts are that after taking about ten minutes of apprehensively feeling it out, I then steadily and increasingly fell for its charm. It is equal parts funny and sincere, confidently covering well trodden issues of presumed adolescent normalcy, but in a unique way. The witty, original dialogue and character crafting was a particular highlight.

The opening night film of this year’s Bradford International Film Festival was Whit Stillman’s Damsels in Distress. Stillman’s 4th feature film and his first since 1998, Damsels in Distress has been a long time coming. Stillman tells us the story of a group of University girls in America that run the Suicide Prevention Centre. The girls – or the Damsels – meet a number of men – or their Distress, or as they’re referred to in the film: Douffi (plural of doofus). The film perfectly juxtaposes laugh out loud comedy and a cynical look at university life. The four main characters are likeable from the start, even if we do only concentrate on two of them. The film, which features quite a lot of dancing, even going so far to start a new dance craze, has a wonderful all singing all dancing final scene that is beautifully shot. Damsels in Distress is a warm hearted, funny and wonderfully enjoyable film.

you can follow James on Twitter @James_Voller,  and read more of his writing at his blog, Wrestle With the Questions

Bradford International Film Festival (April 19-29): Three to look out for

BIFF’s Bradford After Dark: Horror films from all around the world