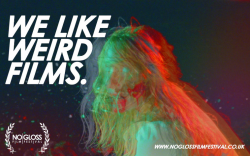 It’s that time of the year again: dark nights, wooly jumpers, mind-bending dystopian concept movies screaming out against the fuckery of reality – No Gloss Film Festival is most definitely back in town and is just around the corner, on the 22nd and 23rd of October. Not only that but the coolest film fest in Leeds is turning five this year and are keen to share their joy of everything that has been achieved. A spokesperson said ‘We’re really proud of how much we’ve grown over the years and had chance to experiment with different venues and with the festival as a whole.’

No doubt, if you’ve been to No Gloss in recent years you were able to enjoy it in the iconic and historic Canal Mills which has plenty to offer in its own right but elegantly complements the industrial roots from which the festival was brought to life. The diverse range of films that are due to be shown this year will feature across the venue, allowing you to clamber out of an exotic alien world just to fall into a cold, unforgiving narrative riddled with espionage and dark secrets.

Aside from the rich experience that No Gloss guarantees to provide, this year will feature panels and workshops from mystery guest speakers, ready and willing to have their brains picked at for film industry know-how and the realities that come with giving birth to a movie – ideal if you’re an aspiring film student or film maker! The great thing about this festival is its unadorned approach to film exhibition – it shouldn’t be about red carpets, celebrity glamour and ego. This is a NO GLOSS film festival showing nothing but realness, raw talent and a rapaciousness to revolt against the damning gall of society as we know it.

One example of the No Gloss line-up is Three Minute Warning, directed and written by Iqbal Mohammed and produced by Alex Gibbons shines a glaring spotlight the ongoing struggle taking place in Palestine. The feature details a harrowing account of 14 year old Mariam, who already struggling to care for her disabled mother has to act fast as an Israeli bomb hits the roof of their home. A truly breathtaking piece made even more special as Iqbal, Alex and Jack, Director of Photography, first met at No Gloss Film Festival.

A weekend pass can be purchased via their website: http://www.noglossfilmfestival.co.uk which grants you access to all areas including the afterparty, and I’ve been told that the price isn’t dissimilar to an evening at the cinema which is a bonus. However, whether you’re up for a wild weekend full of filmish frivolity, or just fancy popping round for an animated afternoon, you’ll get to enjoy locally produced merchandise and food from our very own Manjit’s Kitchen, and drink from The Northern Monk Brewery. Plus, for all those trekking in from lands far and wide, The Art Hostel (a British first) has partnered up with No Gloss to provide discounts to festival guests to make for a truly fun but yet affordable weekend.

I for one look forward to No Gloss Film Fest every year, and to be able to see it at five years old but looking stronger and more daring than ever before sends me giddy, and fills me with Northern pride. This is a fantastic opportunity to see film you wouldn’t catch anywhere else, catering for everyone’s tastes in one way or another – I hope to see you there!