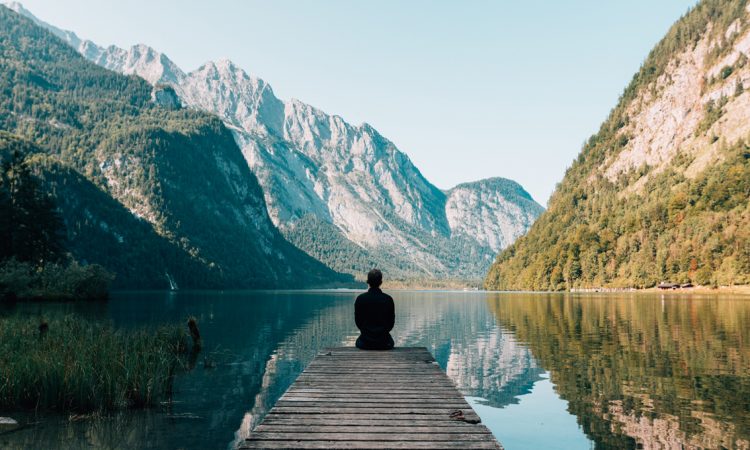 Buddhist Monk GELONG THUBTEN spoke at Leeds International Festival on mindfulness. IVOR TYMCHAK had a mind to question him.

I have a voice in my head that says things like: ‘Ivor, play the bloody game – say nice things to people and like all the stuff happening in the world today, that way you’ll have more friends and your career will flourish.’

Then my voice replies, ‘but at what cost? I’d be a hypocrite and I’d lose my authenticity.’

It puzzles me where these voices come from so I thought listening to a monk talk about mindfulness might help.

The thing that struck me about Gelong Thubten was his impressive eyebrows – dark and lush. I then noticed he shaved his head and beard and I wondered why he spared his eyebrows when they were made of the same stuff. This was the start of my journey into Contradiction Land.

Gelong told the audience about his history; he retreated for 4 years in a monastery where he meditated for 12 hours a day. This sounded a bit like a care home where inmates were expected to watch television for a similar amount of time and my first thought was, ‘wow, that’s expensive, how did he finance that?’

He then told the audience to stop using their smart phones and not be stressed in traffic jams. As I don’t own a smart phone I immediately felt superior to the rest of the audience and I surmised I must be on a higher plane of consciousness but one of the voices in my head said, ‘don’t get cocky.’

He then said mindfulness apps on phones are okay. A voice in my head said, ‘ah, he’s using Zen to trick us’ but another voice answered, ‘nah, this is bullshit. It’s like those wristwatches that tell you what your sleep pattern is like – the knowledge does nothing to improve your sleep. A mindfulness app is the same, it might tell you how addicted you are to your phone but is that helpful?’

Then he told the audience how busy he was and how the market in mindfulness was booming – he even gives talks to people like Google.

So another voice (or was it my authentic voice?) asked, ‘he sounds like a high-flying executive with a crazy schedule – exactly like the kind of person who might suffer from stress, how does he cope?’

Then I had an insight. Perhaps he coped because he’d spent 4 years in an isolated monastery learning esoteric techniques to develop his superpower – he even has an orange superhero costume to confirm his status. His x-ray vision saw through all complexity and rendered life situations into simple black and white choices. This allows him to live the life of a high-powered executive with impunity. Presumably he chooses to be so busy because he earns money from giving these talks? Does he need this money to pay for his stay in the isolated planet? Like a mortgage? Isn’t that a bit like consumerism?

Personally, I liked my savants to be like the holy men of old: eschewing all material possessions, never staying longer than 3 days in one place and living solely from charity. They’d win hands down in any Meditation Olympics.

But times move on and you have to keep up with them (hey, maybe that’s why everyone who has a smart phone thinks I’m an idiot for not having one?)

When his talk ended, Gelong had to rush off to his next gig and the audience were left to deal with their own conflicting voices in whatever way they could.

It was hours later that my several voices managed to meaningfully interrogate where my fury at his talk came from. His arch enemy, Consumerism, had used green kryptonite (or improved extracts from it) to render his superpowers redundant and was manipulating him as if he were just an ordinary mortal human being.

Consumerism affects us all in the end.