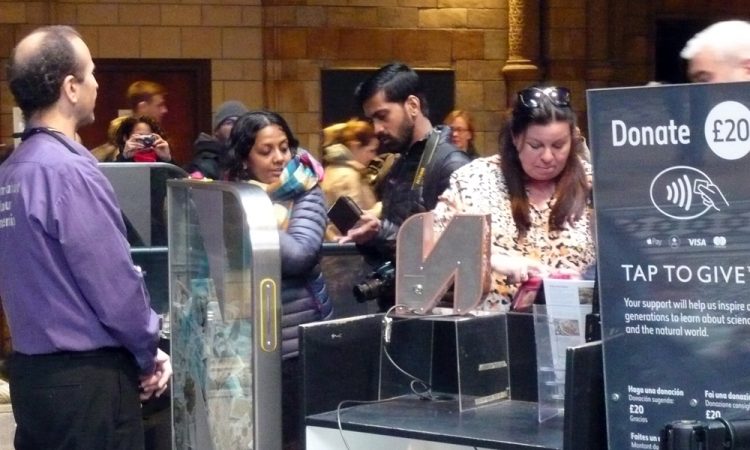 Consumerism; a New Religion for the modern age?

The Natural History Museum in London is a crucible of evolution. I don’t just mean with its physical exhibits but also in the behaviour that its visitors exhibit.

On a recent visit, I observed one of the oldest forms of human behaviour being harnessed and reinvented by the museum – our propensity to worship.

The museum now has a priest on the entrance door conducting a service. His altar is a large Perspex box that contains cash and his baptismal font is a circular pad that accepts contactless donations. As visitors queue to enter, the priest exhorts the congregation to buy Indulgences  – a £20 donation can make their progress through the museum a lot easier as their carbon footprint will somehow be magically reduced* and their consumerism forgiven.

The visitors, clutching their plastic wafers of communion, take turns to move forward, bow in front of the font and wand their submission allowing the machine to eat their soul (or at least part of it).

I noticed some of the visitors rejected wholesale the doctrine of Indulgences and went on an unguided spiritual journey of their own (myself included).

Later, as I wandered through the gift shop bazaar I noticed a woman attempting to work out the procedure for attaching a stuffed dinosaur tail to her person (presumably to give to a child once it had been purchased) and I suddenly understood how Jesus must have felt in the church where the moneylenders were conducting their business. I was furious.

This dinosaur tail was a piece of tat that was going to find its way into landfill quicker than you can say, ‘Extinction Rebellion.’ What the hell was the Natural History Museum doing selling such garbage? Remember, people come from all over the world to visit this hallowed institution and they often take their lead from high profile organisations. It these organisations condone the process of consumerism with all of its unsustainable ‘one-use, throw-away items’ then what sort of example is that to set for visitors? Their hypocrisy appalled me.

I was compelled, like Martin Luther, to nail a list of objections on their door. As it happened, I nailed my objections on the door of social media and the Twitter account of NHM duly observed the note and assured me it would be passed to the appropriate authorities.

If the NHM allows such tat in their gift shop, then they are as guilty of destroying the environment as the people who buy the products. They should be setting an example.

For an institution that celebrates the biodiversity of the environment (and records the species that became extinct) it’s a disgrace that its leaders don’t have the political will to reject the rampant consumerism that is helping to bring about the Sixth Mass Extinction of the planet.

*My interpretation of the gospel