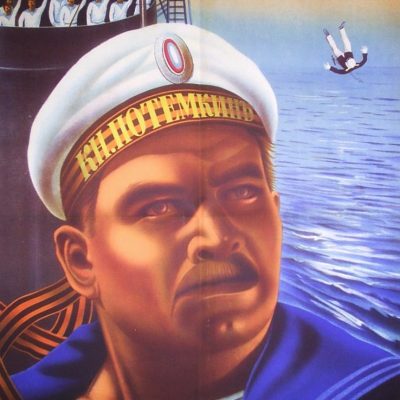 Opera North Projects marks the centenary of the 1917 Russian Revolution with a specially commissioned new soundtrack to Sergei Eisenstein’s 1925 film Battleship Potemkin. LAURA AGER rounds off a year of revolutionary discoveries and distractions at the Howard Assembly Room in Leeds.

Interest in the Russian Revolution has brought about some excellent and varied cultural responses in the UK throughout this, its centenary year. In terms of visual legacy, artistic and cultural production in Russian at the start of the 20th Century was perhaps one of the richest periods in modern history.

At the beginning of the year, the Royal Academy presented a collection of rare and wonderful paintings, graphics, film clips – even ration books and decorated china – in its blockbuster show Revolution: Russian Art 1917–1932.

Not to be outdone, the Design Museum pulled together a fantastic assemblage of propaganda-based artwork, including architectural drawings and publications in their Imagine Moscow exhibition, while over at the British Library, Russian Revolution: Hope, Tragedy, Myths took visitors ‘on a journey to explore how the events of Revolution changed the world forever.’

I have been glued to the hashtag #1917live on Twitter all year, reading real-time tweets from more than fifty linked accounts, each representing historical figures such as Tsar Nicholas II, Trotsky, Lenin, Stalin, Kropotkin, Rosa Luxemburg. There has even been an account tweeting The New York Times headlines from 1917.

The University of Leeds had a different take on the revolution in their exhibition Caught in the Russian Revolution at the Brotherton Gallery. Artefacts from the Leeds Russian Archive relating to the British community living in St. Petersburg at the time told a story of disrupted lives and danger.

Which all brings me to revolutionary Soviet film Battleship Potemkin with its specially commissioned soundtrack, performed live by composers Jan Bang and Matt Calvert to a packed Howard Assembly Room in November.

Pioneering Russian film-maker Sergei Eisenstein’s classic film depicts the pre-revolutionary events of 1905, where a lower-ranks revolt over conditions onboard a Russian Imperial Navy vessel lead first to brutal suppression, then an all-out mutiny. Made in 1925, the film commemorates these events. A microcosm of Russian society, Battleship Potemkin is a powerful allegory of what was to come.

The two composers Jan Bang and Matt Calvert embark upon their soundtrack by creating an uneasy atmosphere using discordant sound to reflect the escalating tensions onboard the battleship.

The two are sat behind desks and laptops, so it is difficult to see what they are actually doing. They improvise with electronic samples and effects, Bang mixing in the sounds of struck metal objects as the unhappy sailors refuse to eat their maggot-infested borscht and empty bowls are left clanging on swinging metal tables.

When the mutinous ship moors in the Black Sea port of Odessa, all becomes peaceful as people on shore mourn Vakulinchuk, the sailor killed during the uprising. The ship bobs and rocks gently in the harbour, the musicians creating a gentle reverie to match.  Soon it changes, everyone in the audiotoriumanticiparing the famous pram sequence coming up.

Calvert’s nerve-shredding guitar is matched by furious rhythms. In retaliation for this atrocity, the warship turns its guns on the city’s Opera House (‘the enemy stronghold’). Did Opera North consider this point, I wonder?

As the ship sails away from the carnage, the crew encounter their comrades in the fleet. The ship’s flag flying for this rousing finale is hand-tinted red, frame by frame. A perfect work of propaganda.

Laura Ager is an events organiser interested in cinema, festivals, activism and the politics of self-precarity.