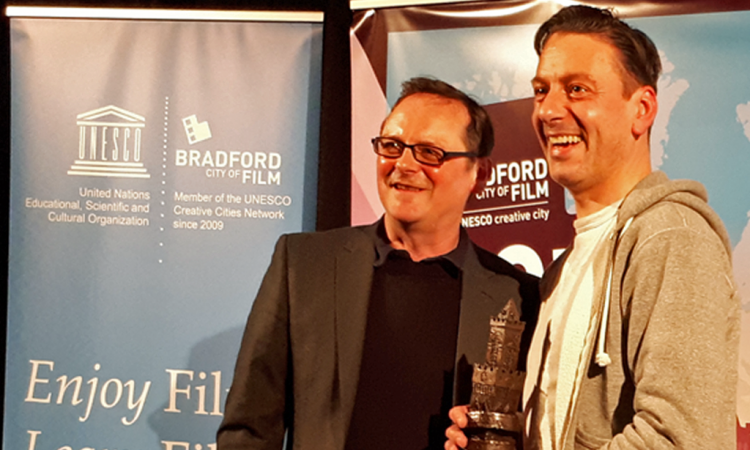 ENZO CILENTI, Bradford-born actor and star of Game of Thrones, Luther and Guardians of the Galaxy talked to Bradford City of Film’s Director, DAVID WILSON as part of the organisation’s 10th anniversary programme of Screen Talks. WORDS: CATHERINE SIMES

I’m a sucker for a Bradford lad or lass made good story, and Enzo Cilenti didn’t disappoint. Self-deprecating, open, funny and evidently still very much attached to his roots, judging from the family members there in the audience to support him.

Growing up as part of an Italian-Bradfordian family, Enzo spoke about his first experiences as a performer. Whether dressed up as a cowboy for the neighbours in Lidget Green or on stage aged nine as Cora Crumpet, Enzo found his niche in drama. Following the building of a new theatre at Bradford Grammar School with the help of former pupil David Hockney, Enzo was in the inaugural production and says he has a lot to thank Hockney for.

Enzo had to adjust to the stuffy world of drama school, learning how to speak ‘posh’ and dealing with audition rejections, as well as successes. His passion for the business sustains him. “When it’s at its best, it’s like play” he says, describing the part of slave trader Yezzan zo Qaggaz in Game of Thrones as like being picked for Manchester City. He treats us to some behind the scenes tales, revealing that the dragon in Game of Thrones is in reality a tennis ball on a stick.

Accent came up, as it invariably does when anyone from Yorkshire has lived out of the county. Enzo had to retrain his Yorkshire accent for the part of John Childermass in the BBC’s production of Jonathan Strange and Mr Norrell, describing it as the biggest risk of his career. But anyone who uses the word ‘scuffers’ and says ‘dunt’ so freely has clearly not moved too far from his roots. Indeed, Enzo calls his upcoming project, a ‘love letter to Bradford.’ He gives us a taste of the storyline and it sounds like a winner. Watch this space.

There is always something sparkly about television and movie people, and Enzo brought a bit of shine to a cold, rainy Thursday evening in Bradford. The importance for young people to see someone else from the city making it cannot be underestimated. Bradford City of Film is playing an important part in making film and television more accessible and less London-centric .

Hockney was the inspiration for Enzo. Let us hope more Bradford boys and girls see a Bradfordian on the big screen and think, ‘That could be me.’ “Boys from Lidget Green should be filming in LA,” says Enzo. I couldn’t agree more.

The talk was part of Bradford City of Film’s 10th year anniversary programme to celebrate the city’s designation as the world’s first UNESCO City Of Film. Other highlights throughout the year include: Peaky Blinders film location walk and dance, Channel 4’s DIVERSE festival, memories of Bradford film events, Screen Talk with Michael Hirst writer of The Tudors and Vikings, sound effects and short film making workshops, and a family film festival in August.