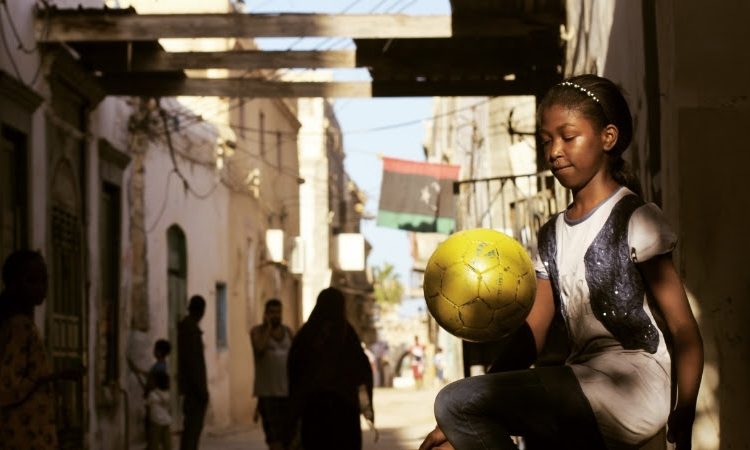 Freedom Fields is a documentary following three women and their football team in post-revolutionary Libya as the country descends into civil war. Review by ROSE GEORGE

It’s dark. Shadows move, and the air is opaque with smoke or dust. Then the shadows coalesce into human forms, and they are female and playing football.

Don’t expect any straightforward exposition here: there are no talking heads or interviews to camera. Names emerge slowly throughout the film like that ghostly girl figure playing with a football at the opening. There is Halima, hijab and toothy smile, the goalkeeper. Naama, a refugee from Targhewa, now lives in a shanty town decorated with UNHCR tarpaulin. There is Fadwa, about which we learn little except that she is brave and frank.

Others are not named, neither other team-members, nor the male coaches, nor the male security guard at the women’s practice who reads an edict from some Islamist cleric condemning the immodest immoral activity of women’s football. The guard burns this ostentatiously, but the women are in real danger, and not just from the mullahs. Militias, a feature of Libya after its revolution; a patriarchal society: the barriers to women simply playing sport take all shapes.

The football federation prevents the women travelling abroad to play in a tournament, for no good reason and the clear devastation of the team is wrenching.

Years pass and football recedes to be replaced by scenes of life in Tripoli after the revolution, when sounds at night can easily be gunfights or fireworks, but life goes on with weddings and studies. Halima still loves ice-cream and football, though she can’t join in with celebrating men watching a national football match. “Boys, boys, boys,” she says, with pure fury.

Naama now has a toddler, but runs fiercely through forests, a burst of freedom from the drudgery of her refugee camp life. Halima tries to travel to Cameroon for a sporting training camp. At the border, she is stopped. “Please,” she says to yet more men with weapons. “For the love of my family, let me go through.” They don’t even bother saying “no.” “Turn around and go home.”

The sullen power of it.

So I cheer when the team is finally reunited and travel to Lebanon, where they face other troubles, but also play matches with spirit and grace (though they lose quite a lot). This could be the feel-good ending, but Arebi is too sophisticated for that.

In the final scenes, the women are back in Tripoli, preparing their own freedom field by cutting its long grass with hand-held sickles. Fadwa and a few others abandon the Libyan national team and its corruption to work for an NGO promoting sport for girls. They play an evening game on their hand-cut grass, and when the lights go out, car headlights switch on around the pitch.

It is unsettling: are they militia? But it is locals who want to help these women, who are giving them their light, just as Arebi has done, quite beautifully.