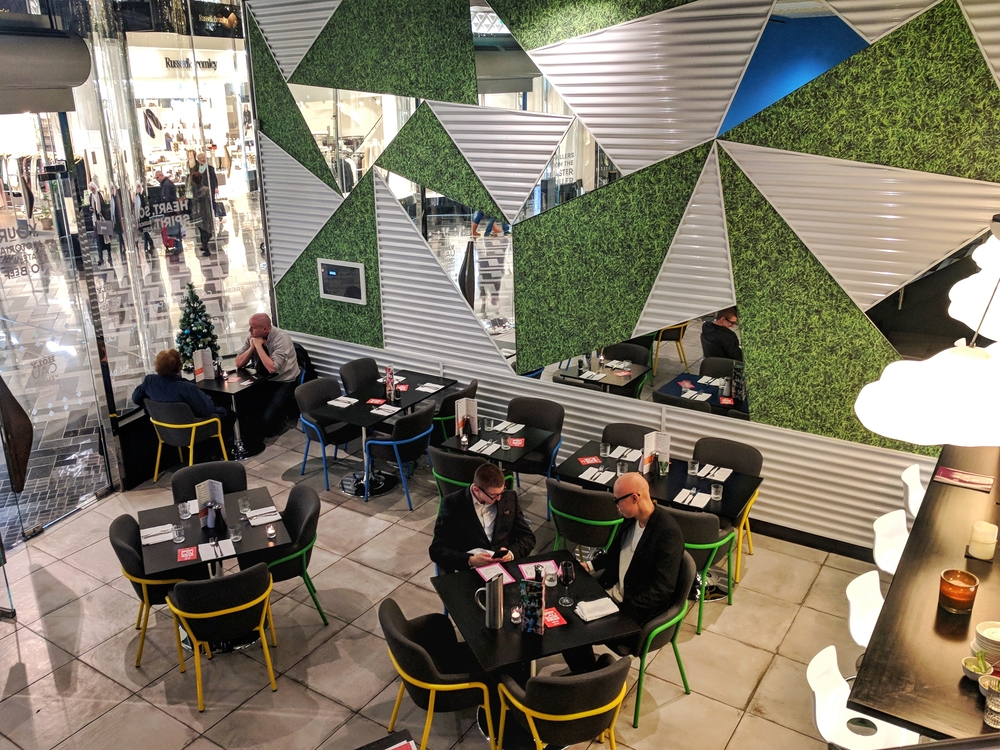 Despite a prime location across two levels in Victoria Gate, I had never noticed the restaurant CAU. Checking their menu online, I was excited. Food with influences from Argentina, Italy and Spain with an emphasis on steak. What’s not to like?

Once we had scouted out the restaurant on the floor plan (an ‘Oh it’s there!’ moment) we stepped inside. First impressions are best summed up by my dining companions reaction, “Oh, is it a cafe?”

We made our way upstairs to the expansive seating area, which offered a view out onto the gleaming glass and marble of Victoria Gate. The funky white swivel chairs and 90’s style grass and cloud print walls were entirely unexpected.

This reminded me of a conversation I’d had with some Southerner friends a few weeks prior. The usual idea that Northerners hold onto their wallets tightly while eating out came up.

Now, being born and brought up in Bradford then having lived (and dined) up and down England I feel I have a pretty good perspective on this subject.

Northerners are not cheap people when it comes to dining out. In fact, they’re happy to pay London prices in the right circumstances. The difference is in what they place the value on, and they often value style over substance.

I relayed this theory to my dining companion, who agreed that she didn’t feel like she had really been out for a meal unless she had gotten a little dressed up first.

This leaves establishments like CAU in a bit of a conundrum. It’s difficult to get people who do not value casual dining to pay £18 for a steak and not feel ripped off, no matter how good it is.

And lord, is it good.

We started with the croquettes, one of each variety is served of smoked haddock, porcini and truffle and ham hock and manchego. I’m generally a big fan of getting lots of different flavours on the plate. While these were individually all very tasty, I would recommend eating them separately as the flavours are very strong and don’t mix all that well with each other.

I had the ‘Anti-cu-chos’ Halloumi and aubergine skewers in a honey dressing. I’ll be honest, I was mostly in it for the halloumi, which was perfectly cooked. The real revelation was the aubergine. I took a bite expecting the typical gush of bitter water that usually comes with the vegetable and instead got nothing but a great texture and smoky flavour. Someone had taken the time to salt and dry this aubergine before cooking, a promising start.

Our server was incredibly knowledgeable about steak. He told us, without missing a beat, what cut each steak was, how it is best cooked and what sauces compliment it best. I opted for the Brazilian style, thinly sliced rump ‘tapa de cuadril’ with chimichurri dressing.

My friend took the beef medallions with blue cheese sauce. The sauce was never actually brought to our table but we were so in love with the food we didn’t notice until we’d finished.

Each steak dish comes with your choice of potatoes; regular fries, sweet potatoes fries or chunky roast potato style chips. The rest of your plate you can fill with a selection of sides, We chose the ‘CAU-slaw’ and roasted pumpkin, both of which I was genuinely sad to not have the room to finish.

The desserts were the only part of the meal which I can find fault with. Most of the dishes centre around Dulce de leche, which I’m normally a big fan of, but maybe not after half a cow. We had the Dulce volcano, which had already erupted and was pretty bland, and the Dulce de leche pancakes which were similarly ‘OK’.

CAU was a wonderful surprise to me, and a reminder not to be such a snob about chain restaurants. The style of the restaurant may be a an acquired taste, but I cannot see anyone being disappointed with the quality and cooking of what’s on offer. If you’re apprehensive, the set prices offered on the lunch and brunch menus are a complete steal. I’m genuinely looking forward to my next visit.