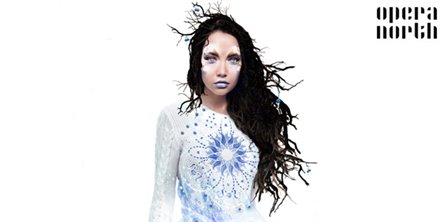 Opera North’s first ever staging of Rimsky-Korsakov’s opera, The Snow Maiden, a reworking of the popular Russian folk fable, is a hoot. From its opening full-scale projection Tsarist 2017 custom calendar (See what they did there?) to the Rococo bling splendour of the opera’s coda, everything about this gloriously madcap production speaks to the heart of the child that beats within us all.

One of three operas staged in Opera North’s season of dark fairy tales, The Snow Maiden merges myth, magic and the weather to tell an ages’ old story of love gained and love lost. John Fulljames’s resolutely tongue-in-cheek interpretation crams a hundred years of Soviet history – the rise and fall and rise again – into just under three colour saturated hours. Think of it as Keeping Up With The Romanovs. It is bound to irk the purists, but those prepared to run with it will find plenty to admire and enjoy.

Urged on by conductor Leo McFall, the resident Opera North orchestra attacks Rimsky-Korsakov’s score with gusto, breezing through the composer’s trademark Oriental bombast and intimate folk counterpoints with giddy relish. As you would expect, the casting is pitch perfect – Elin Pritchard, as Kupava, a flame-haired force of nature, especially so – and the performances are uniformly impressive.

The Snow Maiden has ended its run at The Grand Theatre, Leeds, but goes on a short UK tour until the end of March. It is a shimmering, exuberant production – silly, but enormous fun. It will warm the iciest of hearts.

Neil Mudd is a writer and reviewer. He lives in Leeds. He wishes he lived in 1965.