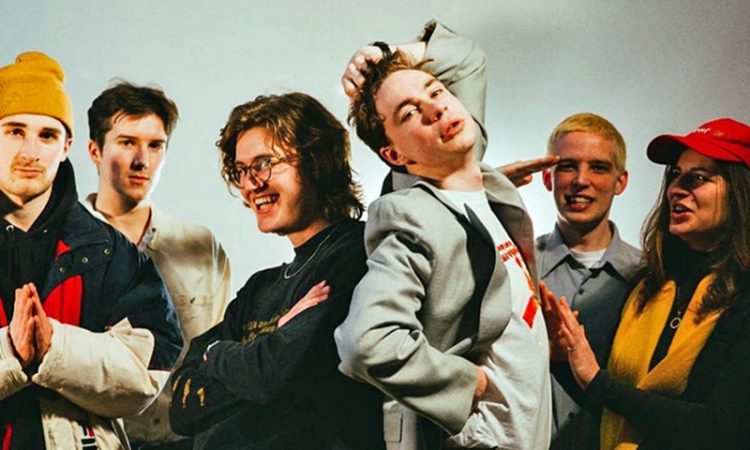 Harlesden-based six-piece SPORTS TEAM are ones to watch. Heirs to Pavement’s slacker throne, they like to have fun, fun, fun says ARCHIE WHINCUP…

Certain bands just have a gift for fun. A knack for infusing their music with an urgent sense of enjoyment. Weezer had it in spades, Pavement too, and it’s a gift London based six-piece Sports Team are blessed with.

It’s been a whirlwind year for the former Cambridge students. They kicked off 2018 with the release of debut EP, Winter Nets, five tracks full of excitement, wry Malkmus-esque wit and charm.

They’ve headlined stages at major festivals like Reading and Leeds, and are bringing the year to a close touring the U.K supporting Spanish indie-pop sensations Hinds.

Tonight’s show at Church is something of a homecoming for Sports Team’s drummer (and Leeds native) Al Greenwood.

Frontman Alex Rice oozes charisma, wit and an endearing cockiness. He banters with the audience, contemptuous and playful like a cat teasing a trapped, tormented mouse before going in for the kill.

“What are you, Church of England? ” he asks the audience. “You’re dressed like your mum will pick you up after”.

Alex is a whirlwind of flailing limbs and energy. Goofy and unrestrained as he walks offstage out of view mid-song or rambles incoherently off mic at the crowd, he is a stark contrast to multi-instrumentalist Ben Mac.

Feet rooted to the floor statuesque-like for most of the show, Mac stares deadpan into the heart of the audience, half-heartedly playing a shaker, a deliberate foil to Rice’s chaos.

Rice performs a stand-out Winter Nets atop a throne of speakers gazing down upon the crowd. The band descends into a tumultuous flurry for closing song Stanton, the crowd shouting back its droll refrain as the frenzy on stage comes to a close.

There’s a lot to like about Sports Team. This tour they’ve filled their social media with unashamed late-night Karaoke bar footage and honest, earnest appreciations of branches of Wetherspoons. They’re clearly having a lot of fun and it’s contagious.