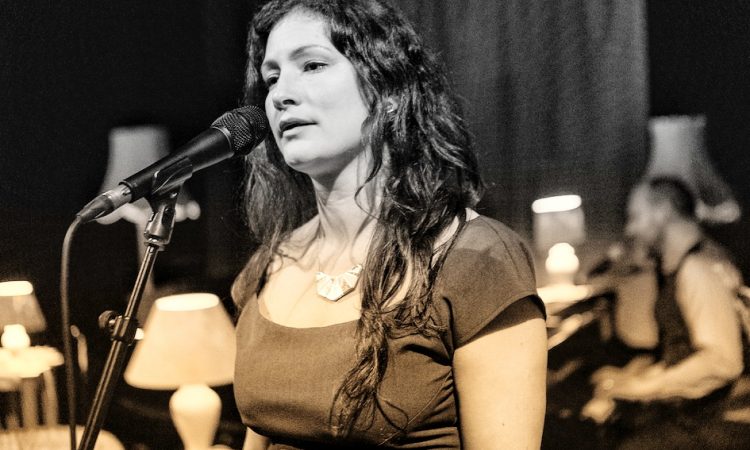 Rachel Unthank with Adrian McNally (Courtesy of The Unthanks)

To commemorate what would have been her 200th birthday, The Unthanks were invited to set some of Emily Brontë’s poetry to music. The result was the Emily Brontë Song Cycle. Review by JAMES FOUNTAIN

The final part in a loose trilogy of albums, all of which feature British women’s voices from points in history, the songs were commissioned by The Brontë Society and composed by The Unthanks’ Adrian McNally during night time sessions at Brontë Parsonage Museum on Emily’s own piano.

Opening with The Night is Darkening Round Me, Rachel Unthanks’ vocal soared through forbidding, wuthering wind effects bringing the wind-swept moors to life as she sang Emily’s devastating lines: ‘The storm is fast descending / And yet I cannot go.’

The performance was stripped back, Rachel confessing to nerves at the paired-down intensity.

Yet intensity is what lies at the very heart of the poetry. Emily’s words combine uncertainty, melancholy and landscape: ‘Shining and lowering and swelling and dying / Changing forever from midnight to noon.’ Her tragic brief life was poured into her writing, making The Unthanks ideal modern-day collaborators.

Becky Unthank’s wonderful She Dried Her Tears was drowned in Emily’s desperate loneliness. It was easy to imagine Emily herself sat in the audience in ghostly form. She certainly would have appreciated the uncomplicated beauty of the performance.

The band decide to ‘take a break from Emily’ to perform songs from Lillian Bilocca and selections from women poets of the First World War, the two other volumes in the trilogy. We do return to Emily before the encore, but since this song cycle is so powerfully formed, it would have benefited from being played as a whole.

The result was a somewhat anticlimactic encore, which nevertheless closed with a heart-warming Northumbrian New Year’s Eve singalong, joined by tonight’s support band You Tell Me, featuring Peter Brewis of Field Music and Sarah Hayes of Admiral Fallow.

Pre-order Lines by The Unthanks here.