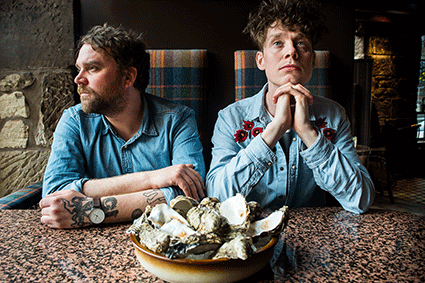 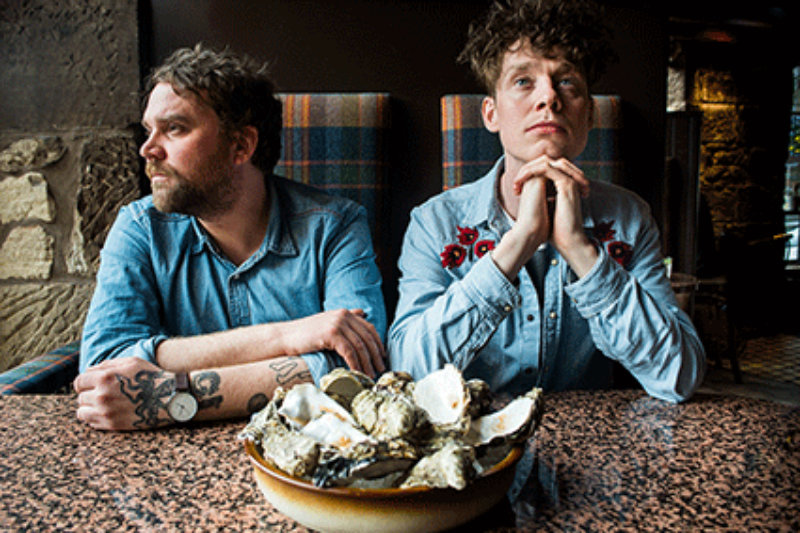 Co-founder of Leith’s finest, the Neu-Reekie! collective, MICHAEL PEDERSEN returns with Oyster, a book of poems for people who never read poetry – and those who do! NEIL MUDD goes diving for pearls.

Is there a place for humour in serious poetry? Michael Pedersen clearly believes so. His latest collection Oyster (Polygon) is a rattlebag of rumbles, fumbles and the affectionate potshot or two at some sacred koos: ‘King o’ Celts, lionized as thistles and / oor Rabbie – yer puss ower postcards, / tea-towels and them rubbishy tins.’

Lanky, excitable as a puppy and crowned with comic book scribble for hair, Pedersen is a gifted poet. For the past six plus years, he has been shoulder to the wheel of Scotland’s Neu-Reekie! collective, alongside co-conspirator Kevin Williamson. Named one of the Canongate Future 40, Pedersen found his debut collection Play With Me chosen by writer Ron Butlin in The Herald as one of his books of 2013: ‘promises much and delivers,’ wrote the former Scottish Poet Laureate.

Augmented by musician Scott Hutchison’s idiosyncratic, faux-naive illustrations, the poems in Oyster reveal Pedersen to be on fine, free-wheeling form. The slim volume is sequenced as tightly as a Dylan album during the musician’s Thin Wild Mercury prime – ‘You came at me in pop songs … from Sauchiehall to the Brill Building.’

Pedersen packs a lot into 120 pages, his fringe panoply of radges, gadgies and assorted other ne’er-do-wells rubbing cocks with his own joyfully squelchy confessionals – the title poem Oyster concerns shellfish only if you believe a string of pearls to be a type of jewelry worn with an evening gown.

Pedersen switchbacks effortlessly between tones: the beautiful sour implosion of Gravity – ‘I love you / she said, as if wearing someone / else’s skin’ – the loose-limbed rapid escalation of Limelite Bar, Meadowbank – ‘She comes at me quickly, wasp-like, lips twitching, pulsing / and eyes frantic: Ehhhh … I need a fucking word wi you’ – or the blackly comic horrorshow of Rollercoasters – ‘Eighteen and the cunt shot / you clean in the coupon.’ Naturally, Irvine Welsh is a huge fan.

Like Welsh, Pedersen possesses a keen ear for Scottish vernacular; also like Welsh, however, the targets for his invective – the post-Brexit broadside of Conversation Overheard in Craigmillar Dental Practice, for example – can occasionally be overcooked. When it does come together, however – as in Portree’s Lost and Found – it is pure gallus.

Read as a whole, the poems in Oyster invoke the uncontained spirit of the Liverpool poets, whose anthology The Mersey Sound turned a new audience onto poetry in the sixties: Fancy Dress for Fancy Folks is every inch the deceptive flippancy of Roger McGough, whilst lurking within the arch chop-logic of Kung-Fu Fighting is Adrian Henri; the keenest felt presence by far is that of Brian Patten, whose signature yearning and fluid eroticism linger exquisitely about the lovely Middle November, Paris, 2015.

Having recently launched Oyster at Edinburgh’s International Book Festival, in time-honoured Neu Reekie! fashion, Pedersen and Hutchison are embarking on a short promotional tour of the UK, appearing at various Rough Trade shops including London and Nottingham. Expect poems, songs and shellfish, though it is probably wise not to ask for a string of pearls.

Oyster by Michael Pedersen with illustrations by Scott Hutchison is published on 1st September by Polygon. For more information, including how to pre-order a copy, click here.