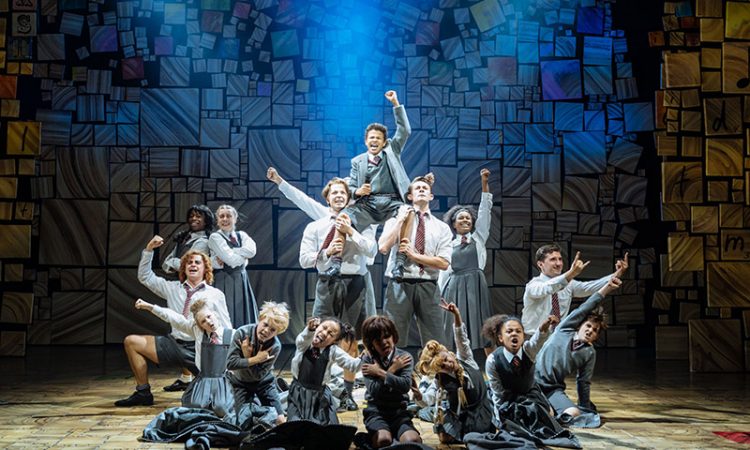 What happens when they turn your favourite children’s book into an award winning musical? CATHERINE SIMES reviews the RSC’s MATILDA THE MUSICAL at BRADFORD’s ALHAMBRA THEATRE.

Roald Dahl’s Matilda was my favourite book as a child. The story of a genius (who the author makes sensibly normal) outsmarting the disdainful and domineering adults around her, it is one bookish little girl’s struggle against inferior grown-ups.

Matilda the Musical (at Bradford’s Alhambra theatre until 23rd March) is part of the RSC’s award winning national tour, adapted by Dennis Kelly with music and lyrics by Australian comedian, musician and composer Tim Minchin.

The stage version has been a world-wide hit. I love the book. I’m a big fan of musicals. I was predisposed to like it. However, I soon realise I’m probably not the best person to be reviewing this show after all.

Like someone from the Jane Austen Society watching an ITV adaptation of Pride and Prejudice, I am possessive of the story, disliking every unnecessary addition and anything that differs too widely from the book – Matilda’s storytelling in the library, for instance, despite the lovely Mrs Phelps.

What Matilda the Musical does manage is to capture the essence of Dahl’s story and his brilliance at knowing what children like and find funny.

The stage version is a glorious pantomime of deplorable adults, each of them hamming it up with relish. Elliot Harper’s evil Miss Trunchbull is comic and grotesque, a huge stage presence dominating every scene in which he appears.

Nicola Turner as Matilda does a remarkable job carrying the show’s big songs and quieter moments. When I Grow Up’s swing scene is a joyous reminder of what it is to be a child and to dream.

The supporting cast of children (mixed with adults to good effect) is as natural and as sparklingly confident as you would wish them to be, embracing
Peter Darling‘s inventive choreography.

There’s enough low humour to keep adults entertained, but with so many children amongst the cast and audience, the atmosphere is positively festive. My ten year old self would have loved it, dazzled by the stunning sets and wanting to be up there dancing with the kids.

Matilda the Musical is at Bradford Alhambra Theatre until 23rd March 2019. Some shows are sold out and many have limited availability, so get your skates on. Details here.