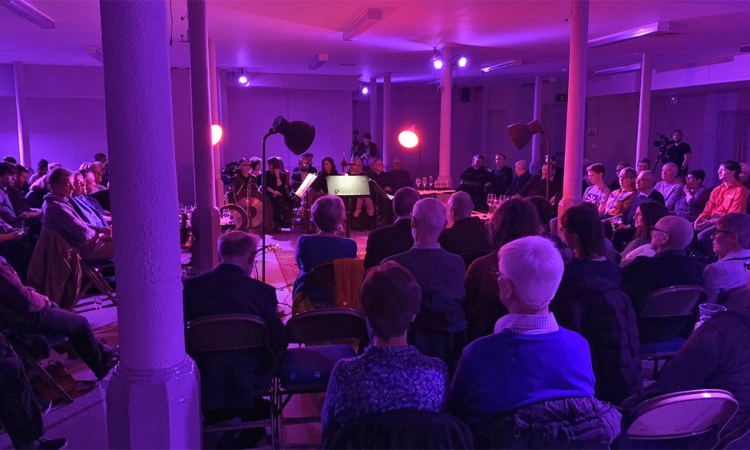 MANCHESTER COLLECTIVE’s BLACK ANGELS is brutal and mesmerising stuff, says NEIL MUDD. The perfect soundtrack for these end of days, in fact…

We are not in Kansas anymore. The rules of classical music do not apply.

Manchester Collective’s pairing of Franz Schubert’s Death and the Maiden with George Crumb’s Black Angels is a characteristically bold one; as is staging it in the stark cinereal confines of Leeds Town Hall’s Crypt.

Driving home the simpatico in these tenebrous masterpieces tonight are violinists Rakhi Singh and Eva Thorarinsdottir, violist Ruth Gibson and cellist Nick Trygstad. They attack each work with telepathic virtuosity. The audience is so close, every nuance of communication between the players is amplified.

In the wrong hands, Schubert’s String Quartet could easily be drained of life, its romantic melodicism masking the skull beneath the skin. Tonight’s performance is the very definition of physicality, a sinewy rage against the dying of the light. Rarely has plea bargaining with the Grim Reaper felt this rich or vital.

You see, Manchester Collective is out to debunk classical music tradition: the set-up is relaxed and intimate; the audience encouraged to parlay with the musicians before and after; scores left out for people to inspect and to photograph with their phones.

It is many removes from the septuagenarian fourth wall which (perhaps unfairly, but not unjustifiably) has come to characterise classical music in the popular imagination.

Crumb’s notoriously complex notation for Black Angels is as impenetrable as the human genome, yet tonight its dark exotic beauty is revealed and offered us as a gift. Writing almost 150 years later, Crumb draws some of his musical references from Schubert – even quoting Death and the Maiden’s second – andante con moto – movement.

A response to the Vietnam War, with its nightly television visitations of horror into America’s homes, Black Angels is the apocalypse now. Fragmentary and hallucinatory, it is the audible world turned inside out. In Crumb’s bleak imaginarium, echoes of the Medieval Latin sequence Day of Wrath speak not of purgatory, but of strangeness and disconnection.

To the traditional quartet of stringed instruments are added tam-tams, wine glasses filled with water and bent out of shape paper clips. Crumb’s vision is a kind of Avant-garde Make Do and Mend, brutal and mesmerising in consequence; spare, rather than sparing. The jolt and clamour of the strings give way to booming universal silence; minims are left to hang in the air, suspended there like final thoughts.

Plans to end tonight’s programme with Schubert – moving as it were from darkness into light – seem to have been cast aside. Instead Black Angels take us on a journey into the heart of darkness, and is all the more breath-taking as a result.

Such intense beautiful works are given renewed life in a dazzling performance by Manchester Collective. With just four left in which to experience it, now is time to embrace the night.