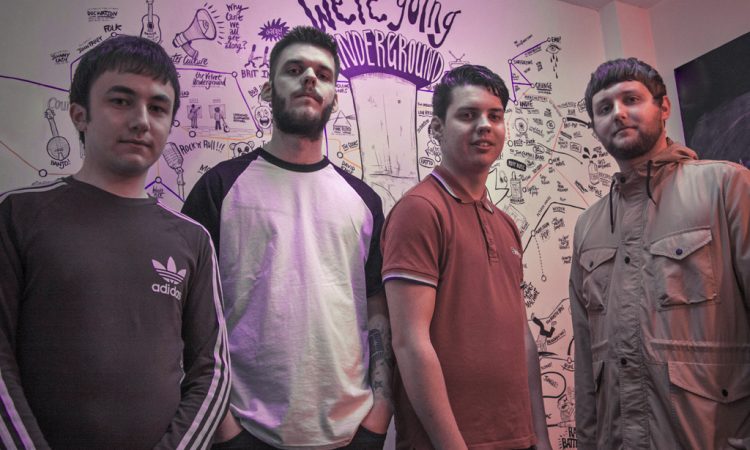 In January this year, Patrick O’Neil and his brother Tom, Jacob Briggs and Sam Shepherd left their previous bands The Voodoo Bats and The Rook to become Stellar.

‘’We all have similar taste in music,” says bass player Tom, “so thought it would be great to come together to create music. We are really chuffed with the results.’’

Frequently compared to Oasis and The Verve, Stellar’s inspirations range from  Jimi Hendrix and Led Zeppelin to the Stone Roses. Current faves are The Blinders, Ivory Wave and Vida, as well as Velvela: “arguably the best band in Bradford,’’ says drummer Sam.

I ask the about the music making process.  ‘’Patch (Patrick) gets a melody for which he writes lyrics whilst playing an acoustic guitar,” explains Tom, “or Jacob comes up with a riff which Patch can write lyrics to.’’

‘’The structure is then sorted out altogether during rehearsals,” says Patrick. “They take place normally with a few beers and getting down and dirty with it. The guys down at SORM studios in Bradford, where we rehearse, are super sound also.’’

The band has already made their mark on the local music scene with sell-out shows at Bradford’s Underground and Wireless Bar as well as appearances at Leeds venues The Library, Brudenell Social Club, and most recently Headrow House where they supported Red Rum Club.

“The set list changes for every gig,” says Jacob, “but we always include our first two singles Project #15 and Young, Wild and Free. We are currently working on new songs that we hope to release soon.”

Stellar believe their music has evolved. They try to experiment and use different techniques, such as the switching up of melodies and guitars.

‘’Our goal is to be a household name in the national music scene,’’ says Patrick. “We would love to play at some middle of the road music festivals like Kendal Calling.’’

‘’These keep getting better,” interjects Jacob, “so calling them that may be an understatement.’’

Stellar are writing and rehearsing new material they hope to release in the new year, and perform a free gig for their fans at Bradford’s Underground on Saturday 8th December. Details here: