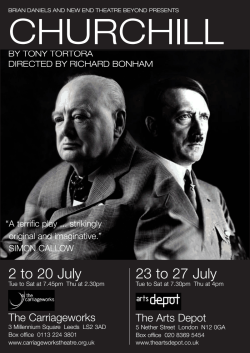 I love a good ‘what if’ story. I think it comes from being a bit of a comic book obsessive (see Red Son, Age of Apocalypse or Watchmen for some great examples!). The idea of reimagining history provides a great starting point from which a writer can tell a story both new and yet hauntingly familiar to an audience. This ‘what if’ idea is played to out to great effect in Churchill, currently being performed at The Carriageworks Theatre, namely – what if Winston Churchill and Adolf Hitler met? It’s an intriguing basis for a play and one with plenty of scope for exploring these pivotal figures – what drove them to their respective viewpoints, where they differ and, perhaps most interestingly, the traits that they share in common.

The idea comes from a near meeting that almost took place between Churchill and Hitler in 1932 when Hitler requested a meeting during a research trip Churchill took to Munich. Before the meeting could take place however Churchill spoke to an aide of Hitler’s saying “Tell your boss for me that anti-Semitism may be a good starter, but it is a bad stayer.” Unsurprisingly this riled Hitler and the meeting never happened

Rather than re-imagine this moment, however, writer Tony Tortora decides to base this meeting in a limbo-like destination that greets Churchill upon his death. Introduced to his new surroundings by Howes (the archetypal English butler played by Stephen Bellamy) and Annie (a feisty maid played by Carolyn Eden who provides the perfect foil to Howes) Churchill remembers little of his past life. As his memories (along with his legendary temperament) return he demands release from the purgatory existence, the mundane appearance of which he takes a personal affront to his life and ‘greatness’. His desire for change and action are answered in a fashion he does not expect, the sudden appearance of Hitler, after which the story truly begins.

The limbo concept works brilliantly in both providing a setting for the play as well as encapsulating the story itself. Along with wondering what will happen during this dramatic meeting we are left pondering why the two have been put together in the first place. Is this some form of punishment? Must one convince the other of their opinion or is it the case that each one must understand and forgive their greatest adversary? I have no intention of spoiling the revelation here but rest assured when the truth does come out  it is both unexpected and satisfying.

Limbo itself is present through a sparse set consisting of period furniture and appliances (at least to my very untrained eye) that the characters would have been familiar with in life. With such a simple set and the cosy atmosphere of The Carriageworks (I was so close that I had to fight the urge to reach out and try to steal Hitlers boots, which were incredible, several times) the pressure and emphasis on the actors themselves is huge, a task which they handle superbly.

Bellamy and Eden are both excellent in their roles, providing moments of comedy in their attempts to mediate and fulfil the requirements of their two guests along with providing characters that we can identify and relate to, but a huge amount of credit must be given to the actors playing the two leads. I find it difficult to imagine what it’s like being asked to play a figure like Churchill or Hitler, but Jem Dobbs and Michael Forrest (Churchill and Hitler respectively) truly rise to the challenge. As well as the great interplay between the two characters there are some outstanding monologues; Churchill slowly regaining his memories and drifting into one of his famous speeches along with Hitler emotional confession of what he felt when he heard the German people cry out “zeig heil” are just two of the moments that found me edging closer to the edge of my seat (and other clichés) transfixed by the performances in front of me.

The script provides an excellent basis for the actors to work from. The two characters are explored in great detail as is the fact that they are inexplicably linked together in history. “What is Churchill without Hitler?” Hitler rebukes Churchill after he talks of his place in world history (he’s got a point). Just how different were Churchill’s views on the British Empire and Hitler’s actions to what perceived as ‘inferior races’? The passion with which the actors present the constant battling back and forth coupled with the strangely serene moments where the two men almost seem to form a connection over their mutual love of art make for compelling theatre, the ultimate direction of which you’re left guessing until the end.

So if you’re wondering “’what if’ I went to see this play?” that’s an easy one. I imagine you’ll be as impressed as I was. We’ll never know what would’ve happened had Churchill and Hitler truly met but this play provides a fascinating glimpse of what might have been.

Churchill (directed by Richard Bonham) is at The Carriageworks Theatre until 20 July. Tickets are £12 (£10 concessions) and can be purchased on 0113 224 3801 or at http://www.carriageworkstheatre.org.uk/