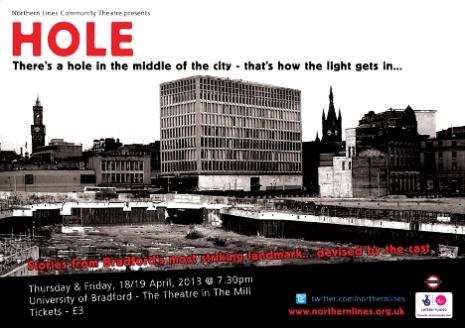 In the middle of Bradford, where there should be – according to regeneration plans hashed out by corporate minds sometimes in the early noughties – a shrine to consumerism in the form of a fuck off great Westfield Shopping centre, there is, instead, a big hole. Bradford strikes you – if you visit more than once and realise the building-site is permanent – as a city on pause. Wander away from the shiny Centenary Square and amid the grand sandstone relics you’ll find the boarded up Forster Square site, occupied by the hole.

The crater of Forster Square serves to frame Bradford as a post apocalyptic cityscape – the disquieting presence of a massive nothingness is only highlighted by the children’s art work which decorates the once-temporary boards shielding the crater from public view, and the usually grey English sky. It’s as if, one afternoon, workmen idly put down their tools and never returned – which is, of course, almost exactly what happened.

The psychological effect, one would imagine, of having greedy speculators ‘invest’ in your city and then wander off for almost a decade, is similar to the effect of any neglect. Righteous anger, despair, fight-or-flight survival and, when all else fails, brittle humour. And that psychology was what Hole, a community drama project performed at Theatre in the Mill on Friday 19th and Saturday 20th April, sought to portray.

Hole was exactly what community theatre should be. Local people pushing up against the corporate corruption that shapes their lives and saying, out loud, ‘this is who we are and this is what you’ve done to us and this is how we live with it.’ The ensemble cast fused movement, poetry and monologue in a lyrical script by Javaad Alipoor which illustrated the various ways that the hole has shaped the practice of the city, and the ways the residents of Bradford live within and around it. The stories framed the hole as a central character – my favourite moment was when a discarded packet of cigarettes gave way to the story of a Bradford resident harassed by police for his duty free haul (while the nameless, faceless corporate criminals who have destroyed the city were left untroubled).

I was particularly impressed by the power of the language, and the way that the company worked as a chorus to emphasise the poetry of the script,

This is journalists cops and councillors on the fiddle.

This is not a city.

There’s a hole in the middle.

I was also pleased that the audience seemed so invested in the work – the support for the company and real feeling for the subject matter of the play was clear from the laughter, shouts and murmurs of concord that served as an impromptu soundtrack to the performance.

I only hope someone in a position to change the state of the Forster Square site was watching. Or, at the very least is reading this and will decipher the subtext I’ve subtly written into the next sentence. Pull your finger out your arse and sort it, Bradford’s waited long enough.