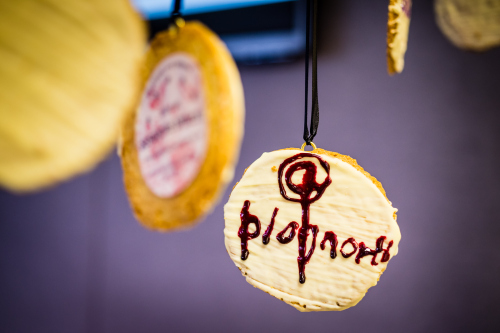 If you follow me on twitter you might have wondered what on earth I was banging on about on Saturday – was I having some sort of food-related breakdown?! No, I was simply attending one of the best events I’ve been to all year.

Blog North (@blognorth) – a network who organise events for bloggers in the colder, windier and hillier regions of our green and pleasant land – had joined forces with Creative Tourist and Emma Bearman of Culture Vultures (@culturevultures) to put on an event fit for even the greediest of citizen journalists, with the theme ‘Food, Glorious Food’.

The day itself was spectacularly put together and dealt with the premise that blogging can be a pretty isolating task. You tend to be sat at home, tap, tap, tapping away at the keyboard without really talking to anyone about what you’re doing. The solution? Bundle a group of like-minded bloggers in the same room and hope for the best.

The event was the perfect balance of weird and wonderful. Held at the amazing creative space, Duke Studios (@dukestudioleeds) in Leeds’ Munro House, where the offices are made of cardboard (in a good way) and the picnic area signage actually tells you to keep on the grass – sort of!

In the morning we all arrived a little early to collect our coffee and breakfast from downstairs at Café 164 (@cafe164), where the lovely ladies asked us whether we were, “with the bloggers club too?”

“Ooh”, I thought, “part of a club are we?” And I don’t know why, but I knew then we were going to be part of something special – I wasn’t wrong.

On arriving at the neo-Narnian Duke Studios we were all given a biscuit on a ribbon. Each of us iced our own biscuit with our monikers and wore it as a name badge throughout the day – some disappeared very quickly, whilst others managed to make them last for most of the merriment.

At first it may have seemed a little antisocial, with people checking in, photographing, uploading, and hashtagging their whereabouts and various witticisms on multiple platforms, but, once that was out of the way there were plenty of interesting people to meet and greet, with all aspects of foodie fun to discuss.

We heard from Paul Winch-Furness (@paulwf), a photographer, who in just fifteen minutes gave the group hints, tips and advice on photography in general, but more specifically in relation to food:

A big cake, standing on its own, on a cake stand with a pristine work surface doesn’t really look right … Think about the story, have a stack of plates and forks in the background, throw some flour on the worktop and it’s far more relatable – you’ll see a big improvement.

After hearing from Paul, we scurried away into various smaller groups for workshops hosted by some other interesting folk. In the session before lunch, I heard from Sam Ward, Brand PR manager for Betty’s Tearooms, Yorkshire Tea and Taylor’s of Harrogate coffee. Her workshop was all about how brands and bloggers can work together, and how each party benefits from doing just that.

Bloggers and brands can have quite tricky relationships, if the terms of that relationship are unclear. Bloggers need to understand that they always won’t be handed freebies: sometimes they might, or they could go their entire blogging career (?) without seeing so much as a promotional lanyard.

An established brand won’t really gain anything from yet another review of one of its newer products by a relative unknown. They would however benefit from a well written account of an event they hosted, a cause they support or an initiative they collaborate on. The partnership needs to be mutually beneficial, you may be able to create good content for your site, but if the brand doesn’t see some kind of return on their investment – even if that investment is just the time needed for a five minute phone call – then why should they help you!

On the other hand, a brand can do an awful lot for you and your site. Simply by sending a tweet with you tagged in it or directing people to your content it can send huge streams of traffic to your blog.

Lunch, oh my. Lunch was fantastic, a feast of North African delights provided my Café Moor (@CafeMoorLeeds): Cous cous, chicken tagine, soup, roasted vegetables, harissa and some perfectly wrapped parcels of chicken and vegetables in crisp filo pastry. Kaddah, the charismatic cook behind the food, talked briefly about why he cooks what he does. As he sees it, he is ‘reclaiming’ recipes corrupted by years on dull British take-away menus, and ‘cooking them how grandmothers used to’, in the traditional and authentic way. It was truly inspiring to see someone so passionate about his food – although, to be honest it’s hard not to be passionate about Kaddah’s food, especially the beautiful baklava that appeared next.

In the afternoon I spent time with the award-winning food writer, Emma Sturgess (@emmasturgess) who talked us through the importance of being interesting and engaging, but also being concise – there are only so many adjectives you can use to describe a meal before your readers give up on you. We also discussed ethics and the potential impact of what you write on the restaurants you’re writing about, something definitely worth considering.

A lovely touch, I thought by Emma, was to have us jot down on a postcard a list of things we’d taken from her session, things we would put in practice on our blogs. She collected them all in and they were delivered to us a few days later. It’s all very well and good saying you’ll do something at the time, and it’s easy to forget in the bustle of everyday life. Having a little reminder just when you’ve almost forgotten about it, is that kick up the backside you need to actually do it.

I couldn’t make it round all of the workshops, would that I could! I’d have loved to hear from Cindy Cheung, a Sheffield based blogger. Her workshop covered how you can express your love of food and grow online and offline communities with a creative use of social media, events and charming collaborations, I did manage to find a ‘Missy Cindz’ branded pencil in my goodie bag though.

What next? More food of course. Some of the gathering had baked some wonderful treats to be showcased in Paul’s food photography workshop. There were some cases of serious cake envy, but we all managed to get over it and polish off most of the cake, washed down with Yorkshire Tea of course.

We were lucky enough that day to have two people who had taken their blogging to the next level, and had been or would soon be published: Lynn Hill (@clandestinecake), of the Clandestine Cake Club and Leigh Linley (@LeighGoodStuff) of Good Stuff. They took part in a very thorough and informative Q&A session on their journey from pixels to print, and the difficulties and delights that came with that.

The day was almost at a close, and once we had returned the enue to a suitably respectable state, we trotted off downstairs for something really quite bizarre from Bompas & Parr (@BompassandParr). The company known for its lavish, architectural jellies and the various wobbly installations they produce had developed a prototype, wait for it … ‘Whisky Tornado’. After an introduction to the company by Sam Bompas, one of the founders, we were invited to place a straw into the swirling spirit and take in all the essence of the drink. It was certainly a strange experience, but one that I’ll never forget.

It really was a brilliant day, and the consensus was that we should try to have more like it in future – so keep your eyes peeled people.

There are three major things that I have taken away from this:

1. Bloggers are great people – If you blog, try to go to a networking event like this if you can, you meet some really fascinating people and get to hear their blog’s selling points, some of which are truly unique and absolutely brilliant.(Around the world in 80 bakes, and Everything but the oink were close favourites of mine).

2. Keep an open mind – You never know what opportunity might present itself, and you don’t want to rule anything out you might regret later on.

3. Enjoy what you do – After all isn’t that the point, if you feel like it’s becoming a chore, take a step back and explore a slightly different direction, there are so many things to do to with a blog, it’s surprisingly difficult to be bored by it.