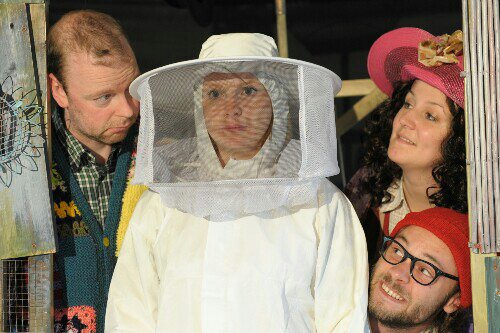 Mikron Theatre. My very first audition fresh out of drama school was with Mikron Theatre.  They didn’t offer me the job. They were right not to offer me the job. I was late. I said I could play the piano to a very high standard. I couldn’t. I said I could do a Geordie accent. I couldn’t. Frankly, who can? I did a monologue by Victoria Wood. I choked on my ‘prop’ – a whole family bag of budget jelly babies that quickly formed a gelatinous plug in my throat – someone had to give me the Heimlich Manouver. It was either Mike or Ron. I know their names because in the bit of the audition where they say ‘any questions’, I asked them,

I’m fascinated to know… why is your company called Mikron?

And I lost it at that point. Really badly. I don’t know why I found it so funny… well I do, it is bloody funny. I can’t repeat the story to this day without losing it all over again. Ask Pete Toon – Mikron’s current Producer – who I met at Pilot Theatre’s Shift Happens Conference this year, many years after the original event.  I could barely rasp and wheeze the story out whilst he looked on with bemusement. But we hit it off, nevertheless, and he was amused enough by the story (I believe) and decided it would be a good idea if I came along and had a look at the work that Mikron are doing now. And perhaps, he ventured, I’d like to review a show…

And that’s how I found myself sitting in a village hall in East Cottingwith on Thursday 27th September – a mere 25 years after they laughed me out of Marsden – pen and notebook in hand, watching and reviewing Losing The Plot by Deborah McAndrew, billed as A Tale of Love, Life and Allotments.

The packed village hall was introduced to the rag tag bunch of gardeners of Thistledale Allotments  – laying bare their love and their longing, their strategies for winning the annual Heaviest and Longest competition (nudge nudge, wink wink), and how they ultimately pull together to defeat the evil Italian Council bod, Harvey Grimelli, (almost indistinguishable at times from Matt Berry’s portrayal of Douglas Reynholm from the IT Crowd – which isn’t necessarily a criticism but I couldn’t see anything else!) … and make sure their precious plots are safe for future generations.

Written by Deborah McAndrew for Mikron’s 40th birthday, touring the country by narrowboat, this show is a heady cross between the Vicar of Dibley, Viz, Dad’s Army and It Ain’t Half Hot Mum, all chucked in a trug with a handful of Blood, Fish and Bone, shaken about a bit and tipped out, riggling and gurning to at once entertain and raise awareness of the resurgence of the allotments and to look at the vital role that allotments have played in the life of the nation for centuries.

I do think Losing The Plot misses an opportunity. There is a serious message in this tightly directed piece and Mikron pride themselves on ‘tackling large-scale subjects and presenting original and accessible live theatre that is entertaining, thought-provoking and educational’… and they’ve clearly been doing an excellent job of this for 40 years (and long may they continue).  I just wanted them to find moments of 3 dimensional seriousness in the piece to really nail home those themes… those moments about the big man vs the little man and how passionate love can so easily slip into beige familiarity. I wanted the nuggets of gold teased out, I was yearning for moments of quiet to balance out the hugely comical characters and treadmill of well written music hall and original songs.  Don’t get me wrong – the cast presented the script they were given perfectly. I just wonder if now and again, the piece could change key and let the audience muse on the story they are being told…

However, I loved the inventiveness of the storytelling, the slick songs and accomplished musicianship. I enjoyed the neat framing device of three love stories holding the audiences interest with the requisite will they, won’t they? conflict. I enjoyed the nifty device of using scarecrows as extra characters that the actors later breathed life into (I felt they could have been used more… but imagine time had something to do with that!). I couldn’t fault the actor/musicians, they are a superb and accomplished cast (I can see why I never made the grade) and the audience enjoyed themselves immensely. And I applaud any company who doesn’t rely on their audiences coming to them, but plonks itself firmly in the heart of their community and gives them a rollicking good night  –  or day –  out.

And I won the raffle. And it was red wine. It washed down my Jelly Babies a treat.

Thank you Mikron and East Cottingwith for your hospitality.

Losing The Plot will be touring until the end of October 2012 along with Mikron’s other newly commissioned show, Can You Keep A Secret which tells the dramatic story of the Yorkshire Luddites.