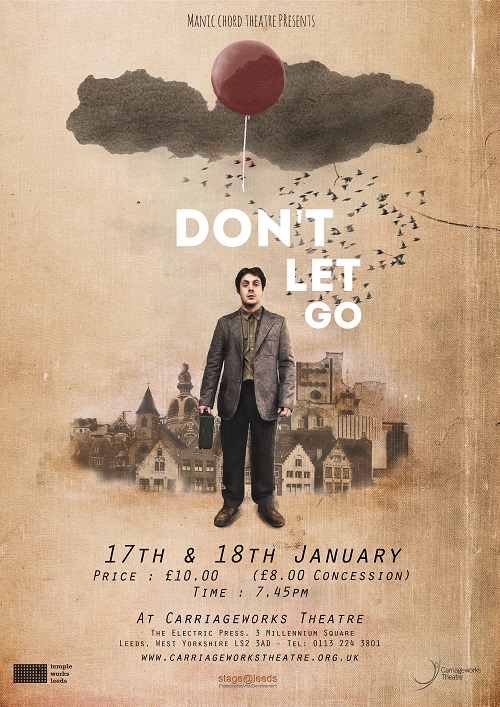 So, in for another evening of Theatah (which I hate). Sigh.

I like a good book, a band, a bit of an outrage of an evening. But Manic Chord Theatre are residents at Temple.Works.Leeds – I’m Director there, so I’m kind of obliged. They hang out in our Joiner’s Bar, making a lot of noise and laughing uproariously as they try out incomprehensible acrobatic routines.

Even though I always take the mickey out of them, they asked me to review their latest soft launch of a long developing production, “Don’t Let Go”, at the Carriageworks January 17th and 18th.

The fact is, they offer really wonderful, short-sharp entertainment: and if you don’t like theatre – and even if you do! – you should make the effort to see their productions as they develop.

Being a reader primarily though, I like plots, and Manic Chord don’t do plots.

In fact don’t ask them for a plot. They do action. Flights of fancy. Slapstick, shock, pathos, poetry, tango and ensemble wind-dancing. A Manic Chord production is a buffet of a show with a bit of everything, knit loosely together by the speed and astonishing virtuosity of the three principals; Dave Cartwright, Sam Berrill and Alex Monk. (Can we get an interview? Ed.)

Into only their second year of professional performance – and all in their very early twenties – these three already have a loyal and rapidly growing following that are willing to see different iterations of the same production in order to give feedback and to help shape the narratives, often over a drink or BBQ at Temple.Works.Leeds.

So: to set the stage: you have the picture: be warned, each iteration can be different so what I describe now might have changed by the next performance. ,

Now onto the non-plotted play.

A gently writhing figure, so low down on the floor the audience strains to see (a dog? a boy? a clown?) trying to find his feet … we all feel like leaping down and connecting foot with hand.

Len is a wispy young man, a junior manager at The (apocryphally Northern ) Factory, ageing rapidly into haplessness. He has been in love with young Julia – who is a typist at The Factory – since childhood, as she is the only person who was ever able to help him tie his shoelaces. (Aha! Writhing figure was trying to tie his shoelaces!)

Her mother – the Hair Rollered Virago – despises Lens’s lack of ambition and tries to keep him away from her Julia. Hair-Rollered Virago’s running commentary on poor Len through her window – complete with faded marabou housecoat, fag and tea – is offset (same player) by the Miniature Factory Boss who matches her for witty misanthropy, mindless stoicism (“Get yer head down”!) and dismissal of young Len’s character and ambition.

The Greek Chorus of the Three Factory Ladies (“Morning! Morning! MORNING!”) provides the commentary and reveals that in The Factory Town, spoons are cultural currency. (“A spoon? A spoon!” “A SPOON!”). Probably my favourite scene is the three Factory Ladies doing their synchronised tea stirring routine in their burlap pinnies, dissing the local talent, while celebrating spoon accumulation.

Through a variety of Deus ex Machina interventions – including a dystopic balaclava-clad neighbour, a class-ridden be-hatted lady flirting with a a stoic mechanic (“I’m on The Job …”) and a very odd vicar – Len finds a magic, walking, flying red balloon which leads him on a fantastic voyage of self-discovery.

Here he meets pirates, parrots and – the lovely, skirt-smoothing Julia at the end of the rainbow. He learns that he must not let go of his dream balloon if he is to survive long enough to get away from The Factory, and The Factory Owner’s bullying: to achieve his heart’s desire, Julia.

Then Julia – no, I will NOT give away the ending, but it did briefly involve a truly extraordinary parrot outfit, ditched I believe during the next performance! Suffice it to say that The Factory Owner is also inspired to … no, I won’t give that away either. More spoons, balloons, rollers, Mad Mams, and wonderfully witty costumes (designed by Isabella Carreras).

It is easy to forget that the on-stage troupe consist of only three actors, sometimes playing three characters each in fewer than three minutes. They do the set changes, change each other’s costumes on and off set, shift props. They do the pirate boat, they work that red balloon through its dances til it does its job and rescues Len.

At times it can be a bit of a frenzy, and even I was not able always to work out who was whom, but it didn’t matter. There are always the principal characters, and this time Sam’s winsomely wispy Len and Alex’s willowy wanton Julia are fully realised people, particularly physically – their dance scene is movingly and erotically played, two blokes or not, and with backdrop and music it was briefly breath-taking.

Dave played both the Mad Mam and The Factory Owner with his usual evilly mustachiod Geordie glee, knowing whispers and winks. He holds the stage each time in a grip, moving the story along and engaging the audience eye to eye.

They now as a company consist of some nine people: the lads have attracted in under a year a group of designers, producers, technicians, and makers as their work grows. They are open to applications as they take their productions on the road.