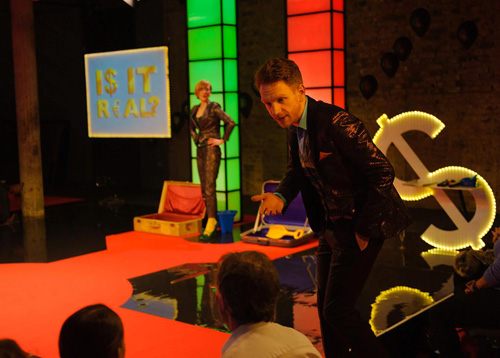 When money is steadily draining out of theatrical coffers thanks to budget cuts, it’s a novelty to go and see a play where the central prop is a pile of ten thousand pound coins. This surprisingly small-looking stash seems strangely unreal under the lights but the awkward security guard sat a few feet away attests to its authenticity. The apparent phoniness of the dosh strikes at the centre of Claire Duffy’s snappy play which tells us that money is only an article of faith, invested with value by a collective belief which can all too quickly be infected with doubt.

Unlimited Theatre’s Money: the Game Show starts in refreshingly different style with a division of the audience into two teams lead by our hosts for the evening, Queenie and Casino, two ex-hedge funders turned performance artists.  When we’re lead into the auditorium the game show element is manifested in a flashy TV set and ear-worming music which plays after every round. Each team has the opportunity to win sand-bucketfuls of cash by betting (long and short) on the result of various party games which more often than not have something to do with a bubble or balloon bursting – not the subtlest of symbolism but effective.

These interludes of audience participation are inter-woven with Queenie and Casino’s backstory – she a third generation city banker and he a numbers genius from a Glasgow council estate, more familiar with loan-sharks than bulls and bears. When Casino starts to scent the toxicity of the US subprime mortgage market (even pre-Lehman Brothers), they make the wager of their lives, betting on the unthinkable – a huge financial crash.

There’s much to like in this snazzy little number. The competitive element cleverly transforms the audience into baying city traders. Despite knowing that we’ll get no financial benefit from any of these shenanigans, the presence of real money creates the same frisson as the fluctuation of the Dow Jones does in bankers. Lucy Ellinson and Brian Ferguson are charismatic team leaders – she a cut-throat financier, he a canny analyst, both fizzing with ambition and greed. Rhys Jarman’s set cleverly flip-flops between the kitsch illuminations of a game-show, to the glossy lighting of a city bar, to the lift up to the cigar-chewing boss on the 30th floor of RBS.

What doesn’t feel as strong is the play’s depiction of the financial crash, a story that has now been told in numerous media from documentary to opera.  Played straight with the performers reporting the mind-bending deficit figures, some of their shock value is lost thanks to our saturation in rolling news. Conversely, when the market becomes personified into a dead-eyed insatiable zombie it all feels a bit silly.  Of course, Clare Duffy has the unfair comparison of Lucy Prebble’s masterpiece Enron which has already told a similar story in a fantastically entertaining and imaginative way.  More gripping are the play’s closing prophecies for the world economy, the most chastening being a suggestion that our continent will federalise with Tony Blair running for President of the United States of Europe.

All in all Money: The Game Show is well worth a flutter, especially if you manage to get on the winning team.