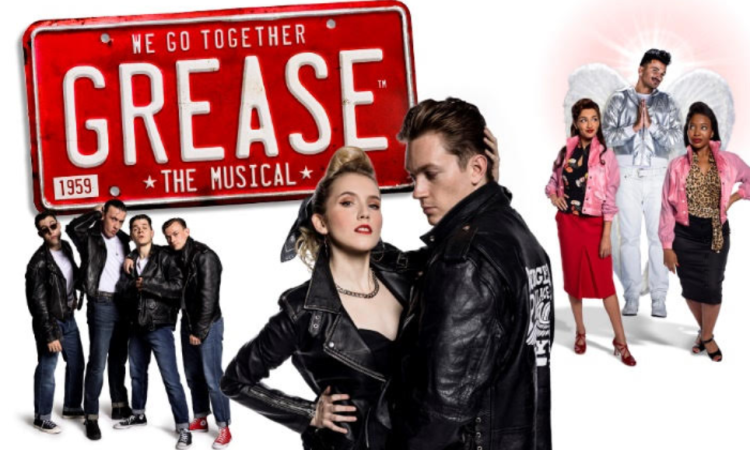 Writers Jim Jacobs and Warren Casey’s incessantly cheerful show opened on Broadway in 1972, although it is set a decade or more before that, when assassinations, riots and defeat in Vietnam had yet to take some of the shine off the American dream.

The  1978 film of the musical, starring, irresistibly, John Travolta and Olivia Newton-John, shows a bright, all-white America; a place of wide skies, perpetual sunshine and perfect health, where  even the school kids have money to spare. This was, of course, fantasy but we could overlook that because it was a thoroughly enjoyable, foot-tapping fantasy.

The challenge facing this production is how to maintain the feel-good factor when it’s freezing outside, we are living in the shadow of a pandemic, money is short and we are sitting in a Victorian  theatre that looks nothing at all like California, or whatever Shangri-La the show’s  Rydell High School is supposed to be set in.

The show’s director, Nikolai Foster, has realised he can’t replicate Hollywood in Yorkshire and so he relies on old-fashioned theatrical strengths. There are colourful, exuberant costumes,  a versatile set that can be a pyjama party one minute and a hand-jive  competition the next, and a mastery of ensemble singing and dancing which means (very unfairly) that you don’t much notice the sets anyway.

The performances are stunningly good. The film has its stars in Travolta and Newton-John but the stage version cannot use cinematic techniques such as lingering close-ups or soft lighting to glamorise Danny (Dan Partridge) and Sandy (Ellie Kingdon), who are, in any case, supposed to be ordinary kids.

We see, instead of two superstars, two very energetic and accomplished performers immersing themselves in a joint enterprise, choreographed by Arlene Phillips, which builds into one of the most thrilling musical finales I can remember.

The  biggest name in the show is Peter Andre , who appears as Teen Angel and Vince  Fontaine  in certain performances only, although the understudy we saw was a very fine substitute,

There are three new songs in the show, which blend in so easily you might not notice them, but this isn’t a radical reworking. The teenage smoking, drinking and snogging levels are still alarmingly high by modern standards and the diversity levels still low. It’s far from a perfect world, but, on a chilly winter evening it’ll do very well.

Grease the Musical is on at The Grand till 4 Dec, book tickets here.

Oliver Cross and his partner Lynne are currently enjoying a creative writing course at Swarthmore Education Centre in Little Woodhouse Leeds. Thoughts and musings from Oliver can be found on Friends of the Chemic facebook site.