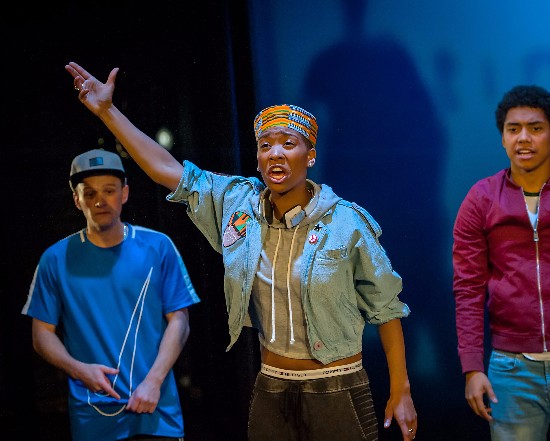 We’re going through one of those phases when poetry has miraculously become cool again, aren’t we?

Ah! Those times when poetry was so cool that (1960s) you’d carry a battered copy of Penguin Modern Poets 5 (Corso, Ferlinghetti, Ginsberg) in the outside pocket of your duffle coat; so cool (late 70s, early 80s) that you’d pay good money to hear John Cooper Clarke and Linton Kwesi Johnson in the upstairs room of a pub – even when they didn’t have the Invisible Girls in tow; so cool (now) that The Broadway on Dewsbury Rd becomes the hippest place in town because Kirsty Taylor and Toria Garbutt are there, lyricising babies in prams with sausage rolls and the Knottingley drugs scene.

What makes live poetry cool? It’s the obvious stuff about verbal craft, a convincing stage presence, topics the audience can connect with … and something too about the authenticity of the poetic voice.

Khadijah Ibrahim and her collaborators at Leeds Young Authors (LYA) have been making poetry cool for loads and loads of teenagers, mostly from LS7, for nearly 15 years, encouraging them to craft their own words, find their own authentic voices, and perform, not just locally, but in annual competitions as far afield as the USA.

One of those competition trips – from preparation in Chapeltown to performance in Washington – was beautifully and powerfully chronicled in the film We Are Poets (if you haven’t seen it, it’s on YouTube/Amazon. Really. Do).

Five Leeds teenagers (that’s the whole cast), each with their own baggage and hang-ups, are preparing for the annual poetry slam in New York. We watch them rehearse, fall out with each other, fund-raise at the Trinity shopping centre (council cuts!), laugh and cry, get stressed, steal a kiss, retreat into lonely dark places and emerge into a happier, more grown-up, collective light …

There’s Queenie from Chapeltown, a motherly young woman whose Nigerian parents don’t think much of her choice of beatboxing as a career; Mack, a cheeky Seacroft lad who’s in danger of following Dad into Armley nick; Devika, a strong but troubled Muslim girl from Moortown; Theo, a sensitive mixed-race boy from Chapeltown; and Darcy, a female poet and singer from Harehills who’s looking after bipolar mum, who’s originally from St Kitts.

There’s an engaging innocence about the way their teenage relationships unfold. Nyoni’s dialogue works, and is nicely helped along by some effective backdrops (video and static) and some cool tech wizardry that lets us in on the characters’ phone chat.

There’s plenty of decent poetry too interspersed throughout the performance. “The audience doesn’t quite get the slam thing,” I heard someone say to a friend at the interval. Were we too muted at the end of each solo turn? My guess is yes.

It’s a good show, and well worth a visit.

But I have a niggle that I couldn’t get rid of from the moment I clocked it at the beginning of the play.

Here was a play about Leeds, about young Leeds poets, in a Leeds theatre that prides itself on being “rooted in our communities”. And not one of the young people who played the Leeds poets was from Leeds (or Yorkshire, come to that). Or a poet.

I don’t mean to go all protectionist about this, but what’s that all about? Do we not have the talent, or what?

Don’t get me wrong. The actors, with the help of their “accent coach”, did a good job, but you had to suspend your disbelief that 1) they were from Leeds and 2) they were poets.

Which makes the whole premise a bit tricky.

The authentic, cool and powerful thing that Leeds Young Authors do on stage – check Azalia Anisko’s hilarious sex-biscuit rant and Joseph Buckley’s joyful rap against the USA in the film – seems to have been diluted and distanced in the theatrical production.

Nothing wrong with that, of course. It’s a play. I should get over it.

Back in January the Playhouse put out a call for “poets, spoken-word artists, performers, beatboxers, and other exciting young artists from West Yorkshire” to come and audition for the play. They obviously had a change of heart. I wish they hadn’t.