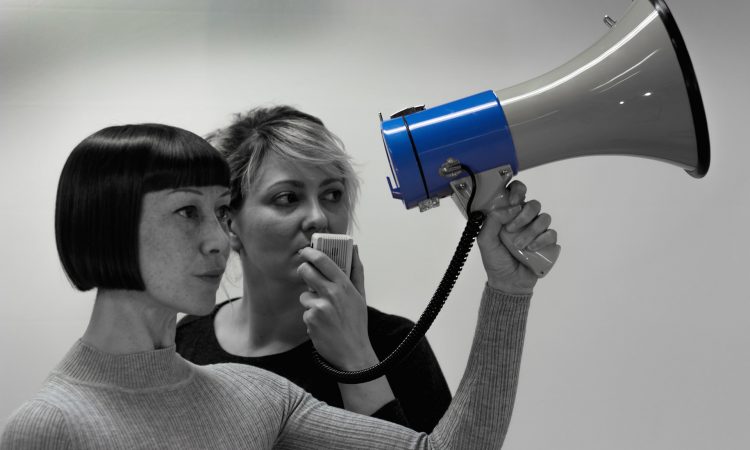 ‘There’s a shadow coming, across the sea. Long and terrifying. The vultures are circling, the wolves are howling…‘ The Audit is Proto-Type Theater’s second work examining contemporary politics… Review: NATHALIE TOLMIE-THOMSON

Proto-type Theater‘s The Audit (or Iceland: A Modern Myth) is an interesting composite of spoken word, poetry, history, storytelling, a fancy Powerpoint presentation and dance. There was definitely choreography of some sort involved anyway…

Devised and performed by Rachel Baynton and Gillian Lees, tonight’s show started twenty minutes later than billed (which just isn’t cricket on a school night), so I went into the (rough and ready) theatre space of Bradford’s Theatre in the Mill with a bit of a grouch on.

To make matters worse, just when I was taking my seat – inches from plonking my bottom down on the long bench, in fact – the person behind me said, “Excuse me, I actually want to sit next to my wife.”

Not wishing to become the filling in a marital sandwich, I huffed my way to the back where I couldn’t be disturbed, though try telling that to the people who clambered all over me to get to their friends.

When everyone was eventually settled, eyes focused on Baynton and Lees at the front facing us. I wasn’t quite sure what I was about to see, but I couldn’t take my eyes off Lees’ hair; it was so shiny and perfectly coiffed.

For the next hour my enjoyment ebbed and flowed as the show’s various elements were paraded before us. Some were more palatable than others. I cringe hard at slam poetry at the best of times, especially in an intimate space, so the punchy speeches in rhyming verse at the beginning had me gnashing the edges of my gin and tonic-filled plastic cup.

The history of the economic crash stuff was great, as was the co-ordination between both performers which added real emphasis to the dialogue. These are tricky ideas, so the background ‘music’ (trippy noises for the most part) and visual effects which accompanied them could be quite distracting.

I liked the variety of visual styles on the screen between the two actors, but whenever words didn’t marry up with the images, it took my focus away. Similarly, I could see what they were trying to achieve using Iceland as an example in their storytelling – allegories of old gods and new invoked the emotions demanded of a catastrophe like the 2008 economic crash – but it rang a little hollow as the topic was clearly more deeply important to the performers themselves than to the audience.

Lees got really quite emotional at the end, making an impassioned call to arms to the thirty or so people in the crowd. I felt like I was bearing witness to the personification of an echo chamber, but with a smidge of disaffection and fatigue on behalf of the audience thrown in.

Perhaps I am being a little too cynical.

It isn’t the fault of us lowly folk that we are relentlessly punished by a handful of global extortionists, yet expected to keep turning the fucking wheel of capitalism all the same. But I’m tired of knowing how corrupt people are. I just want to go to sleep – it is a school night after all.

Proto-Type Theater’s The Audit is at Sheffield’s Crucible Theatre on 22nd May and Barnsley’s Civic Theatre on 24th May. Details here.

More Theatre in the Mill on The Culture Vulture.