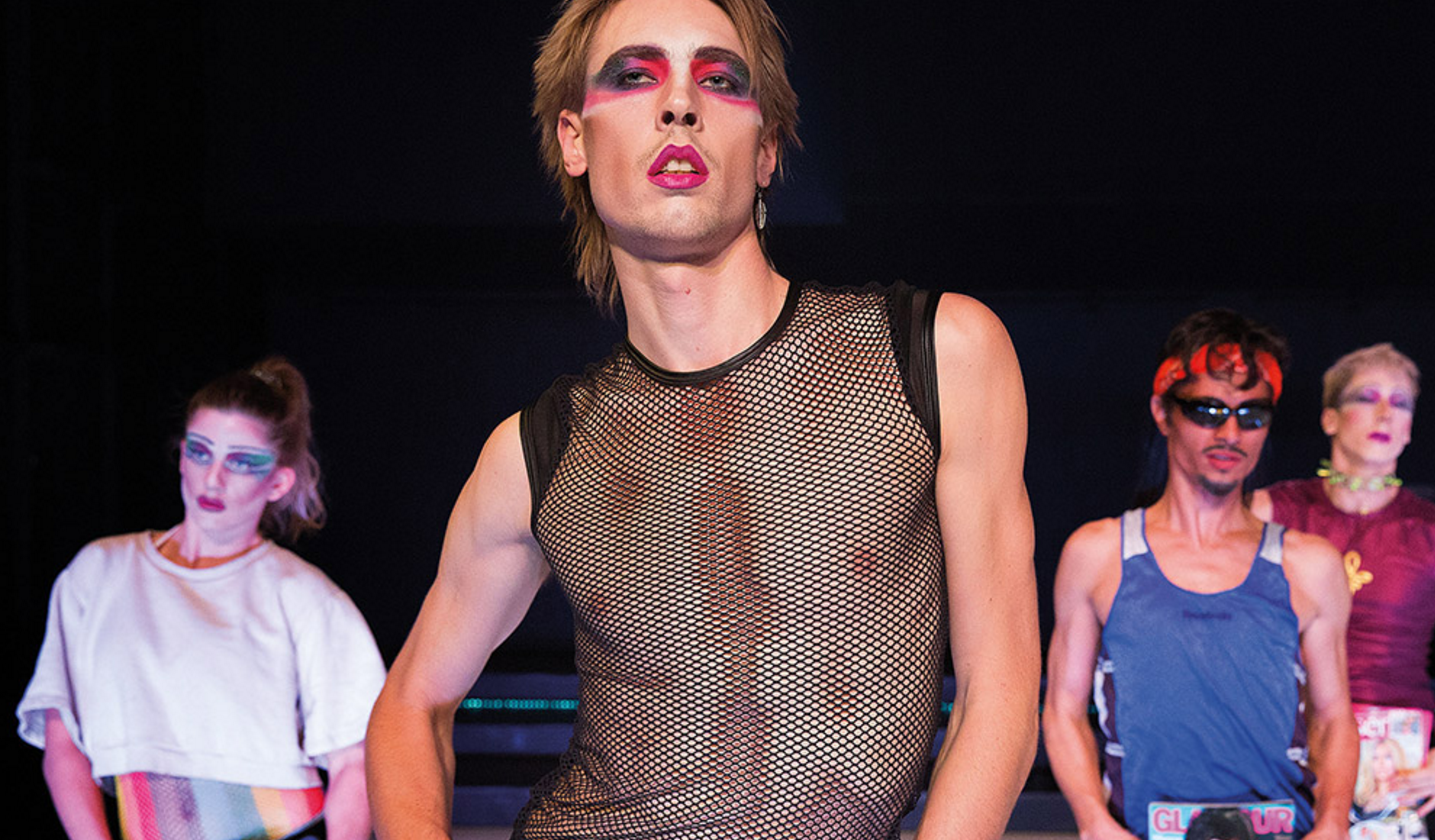 To call Wellness, the opening show in this year’s Leeds Transform festival, “physical theatre” fails in so many ways to capture the sheer visceral, earthy, sweaty quality of a performance which is all about bodies. Bodies in clubs, bodies in gyms, bodies writhing and contorting on the stage.

The ensemble of five dancers, led by choreographers Florentina Holzinger and Vincent Riebeek, take the audience on a surreal and sometimes shocking journey.

The stage at the Riley Theatre, home of the Northern School of Contemporary Dance, has seen many passionate performances where, by custom, dancers’ bodies are rendered sterile, sleek and asexual in tights and leotards. We see the shape but not the substance of the body beneath.  Not so in Wellness.

From an opening scene in which our narrator appears to walk barefoot on broken glass there is a real sense of physical vulnerability in the piece, heightened by the nudity of the dancers. Four of the group spend half the performance naked, often in a state of enhanced nakedness, bodies glistening with oil or caked in earth. The nudity is much more than a throwback to the sixties happenings of Hair or Oh! Calcutta – it’s a commentary on the pop culture, health and fitness, fashion and beauty obsessions of the new millennium. There’s also a healthy vein of humour never far below the surface; from a pastiche talent show where the performers’ singing is critiqued by a sharp-tongued narrator to a gross-out scene involving eggs, the audience is never allowed to settle into a frame of mind which is too earnest. Neither does the nudity substitute for or detract from the technical skill, poise and grace of a talented ensemble who are also required at times to demonstrate skills closer to those of circus performers.

The show links a number of set-piece choreographed scenes, the first of which drew spontaneous applause from the audience as the function of the narrator’s unfeasibly large fake boobs is revealed. The most disturbing sequence takes place under the pulsing strobe lights of a club where explicit intimate acts are half seen, half imagined and are all the more vivid for being at least partly executed in the theatre of the mind.

All in all it’s a show which is intensely absorbing, as much for the smell of the earth as the soundtrack and the lighting. Something to be experienced rather than analysed, and with just one more performance as part of Transform 17 at the Riley Theatre at 7.45 tonight.

The show is a worthy opener for the festival. Organisers say they want to reimagine what theatre can look like, bringing bold and adventurous shows to Leeds. It’s hard to imagine where Wellness would find a place in the programmes of our established theatres in the city.