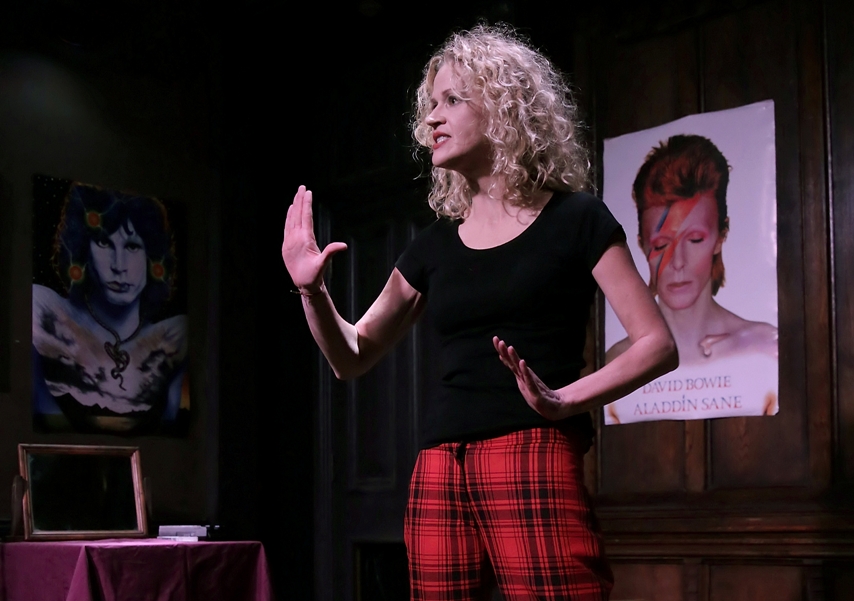 Miz Deshannon reviews The Rise and Fall of a Northern Star by Stella Grundy at Theatre in the Mill, Bradford …

The second work for stage from writer and performer Stella Grundy, The Rise and Fall of a Northern Star could be pigeonholed as a gritty northern tale – young girl from Manchester, Tracy Star, absorbing herself in the Madchester scene, hanging out with John Cooper Clarke and getting up to her neck in sex, drugs, and rock n roll. Although aside from this, it’s not a typically dour Northern tale at all. It is gritty though, highlighting the ins and outs of the music industry, an industry which through its highs and lows everyone in it used and abused each other, and themselves. The semi-autobiographical story (Grundy was once front woman of Madchester era electro band Intastella) is Star’s brief but emotional journey from inner city life to the big city and back, seeking fame and fortune and a respect for her art that she’d not found at home, via anecdote and emotion – as Tracy herself states, “it’s a cautionary tale…”.

Grundy’s solo performance, playing both narrator and performer, is a mixture of storytelling and song but not in a cheesy jazz-hands type, this is pure tough rock n roll baby. Whilst being utterly realistic Grundy’s personality consistently shines through with smatterings of humour, near tears and brutally honest facts. She skillfully takes on the attitudes, the voices, the personas of a great range of characters both male and female resulting in laughter and tension in the audience – the piece is more of a rollercoaster of emotion than you may have bargained for.

Friday’s performance was the culmination of a week of work between Grundy and Theatre in the Mill’s Artistic Director Iain Bloomfield, the piece being adapted and developed for larger stage shows and it’s upcoming tour. Essentially the one-off show was a Work In Progress. But Grundy’s professionalism rose above a couple of technical hitches, which had we not been told afterwards would never have been noticed. There was a lack of backing track for the final song which actually led to her performing a very beautiful and poignant acapella, setting up the final scene with just the right amount of lump-in-throat emotion.

The Rise and Fall of a Northern Star doesn’t lean too heavily on a scene that was a northern thing – it’s nicely balanced between huge levels of pride for the era Star’s band was spawned from, but focuses on traumas that happened to many naive youngsters at the mercy of A&R big-wigs and liggers in the music biz elsewhere too. Including original music from her own band’s catalogue combined with newly written pieces, with spin-off album ideas already in the running, the show has the potential to grow into much more than a stage performance, which Grundy could undoubtedly manage.