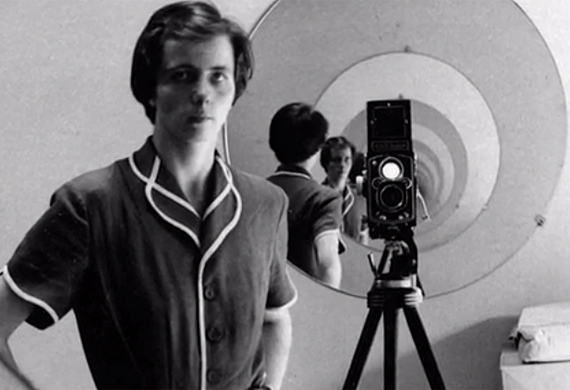 There is something intrinsically personal and sad about the things we leave behind us when we die. The objects we buy and cherish map out the contours of our identity; provide touchstones by which we make sense of our lives. But in the great accounting of death, our possessions are shorn of their narratives, and new value comes to be placed upon them: one person’s treasure could be another person’s trash.

Vivian Maier – the subject of a new documentary to be screened at Hyde Park Picture House – wasn’t even dead when her ‘lifetime packed up in boxes’ was sold off at auction to settle an outstanding debt. Amongst the lots were crates containing well over 100,000 photographic negatives, hundreds more rolls of unprocessed film, home movies shot on Super 8 and 16mm, as well as assorted audio cassette tapes. It turned out to be an astonishing discovery, the stuff of urban legend: Vivian Maier was an artist, a highly talented street photographer, about whom no one knew a solitary thing.

Showing as part of the month long Female Gaze season, Finding Vivian Maier retells the story of that incredible find, and attempts to piece together the life of someone who almost certainly would not have welcomed the attention. In the hands of the film-makers, Maier becomes something of a mystery to be solved and there is nothing the art world – and documentary audiences for that matter – loves more than a mystery.

A number of ‘diggers’ were present that day at the auction, notably John Maloof for whom the documentary is something of a pet project. Lacking any formal understanding of photography, he has since become the self-appointed custodian and, with fellow collector Jeffrey Goldstein, rival torch-bearer for Vivian Maier’s work. The story hinges entirely on chance, the whole lot narrowly avoiding a destiny as landfill: Ron Slattery, another ‘third-generation entrepreneur’ and early adopter of Maier’s work, via his website BigHappyFunhouse, claims that he physically prevented the negatives from being thrown into a skip out back of the auction house. It would have been a tragic loss indeed, though perhaps no more so than any artist we never get to hear about because luck failed to intercede.

This is not to disparage Vivian Maier in any way, or to detract from the startling originality of her photography. She had a natural gift for composition. Her work instantly engages the viewer, capturing her subjects at moments of unguarded contemplation. The images strike through to the profundity of the everyday; they offer an intimacy apparently at odds with Maier’s own inclinations. What little biographical detail is known about her – that she was American, but spoke with a French accent from living in France; that she was a live-in nanny to various well-heeled New York and Chicago families; that she was independent and strong minded, and largely self-taught as a photographer – merely fuels the mythology surrounding her. Intriguingly, when once asked what she did for a living, Maier evasively replied, ‘I’m sort of a spy.’ That she was an intensely private woman and would have hated the excitement her photographs have aroused is evident.

Plenty of people are now claiming a kind of clairvoyance regarding Vivian Maier: the cinema manager who enjoyed discussing with her the films of Fellini and Antonioni – the latter of which feels a little too comfortable a fit; the art dealer who guessed the potential of her work, before major exhibitions of her photographs across America and mainland Europe established Maier as an important voice, sixty years after the fact. There are also those who fail to connect with the eccentric, opinionated lady with the Rolleiflex camera; her former charges or neighbours who refuse to untangle their prejudices about her from the haunting beauty of the images she created.

Finding Vivian Maier throws up any number of such issues. A an individual she clearly divided opinion. However, the documentary reveals as much about Maloof’s own journey as it manages to uncover about its subject. He was just another eBay entrepreneur when, propelled by matters entirely unrelated to Vivian Maier, Maloof shelled out $400 for that fateful auction lot. Later, realising he might be onto something, he began uploading scans of Maier’s images onto his Flickr account and inviting comments, and the reaction took even him by surprise. In the few years since then, he has grown up very quickly to become the media savvy gatekeeper that he is today.

His project is not without dissent. Photographer Pamela Bannos – who herself has attempted to map the psycho-geography of Maier’s images – points out the problematic at the heart of having two men, Goldstein and Maloof, effectively curating the public release of Maier’s work. She argues that with no real imperative beyond the purely financial (individual prints now regularly sell for upwards of $2000 each), how can the work be made available in a manner true to Maier’s original intentions? As those intentions seemed to have been to share them with precisely nobody, it is an argument not without some difficulties of its own. Nor do Goldstein or Maloof epitomise a solely pecuniary interest. The two men share a genuine admiration for Maier’s work which is undeniable.

David Dunlap, a blogger for the New York Times, makes, perhaps, the most sensible suggestion under the circumstances. He recommends the viewer looks at the work and let that speak for Vivian Maier. It is sound advice. Find Vivian Maier in the work she left behind.