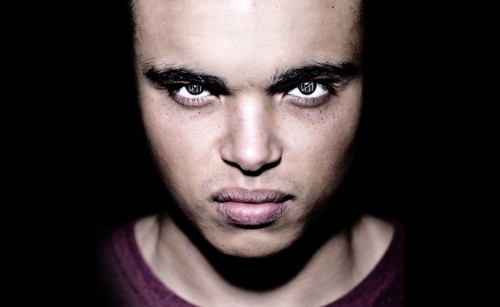 “Exploring empathy in a capitalist society”: Ben Fincher (@BenCVTW) goes to Red Ladder’s production of The Thing About Psychopaths and finds his own empathy in short supply …

The Thing About Psychopaths, which I saw at The Carriageworks on Friday 8th, was described in the press release as ‘exploring empathy in a capitalist society’. It’s something of a loaded gun for any production to be so unabashedly angled, and it inevitably has a profound effect on the way a work is perceived. The play begins in the offices of some sort of trading company, where the central character Noel (Shaun Cowlishaw) is naive, green, and aspiring for success and every other thing a character we’re supposed to identify with is before their inevitable fall. In a play of such brevity (~70mins by my reckoning), that fall arrives very quickly. Noel is coerced by devious, greedy and conveniently misogynistic co-worker Ray and is sent to prison, his city trading career nipped in the bud by one of many heavy-handed metaphors.

Before I continue, I want to make something clear: I didn’t hate the play. I am fundamentally on-board with the political message behind it, which always helps of course. The acting was decent enough, William Fox playing Noel’s intense psychopathic cellmate stealing the show somewhat. The avant-garde touches worked well. And I think the insight into prison life from writer Ben Tagoe’s own spell on remand enriches the play and probably also makes it very personal to him. I really don’t want to come across as cruel and stab anyone through the heart with a shiv of antipathy, but the negative aspects of society that the characters embody seem as transparent and two-dimensional as a sheet of acetate. The female prison officer (Kyla Goodey), for example, is the personification of liberal social-democratic government, taking some pity on Noel whilst still being corrupt and at the whim of the titular psychopaths (there’s that word again), or at least that’s what she seemed to be alluding to. Similar one-sentence summations can be given for every character. I could be utterly wrong and reading into the play too much, but given the synopsis excerpt and personal lefty inclination to do such things, I don’t think I am.

My major issue of contention with the play is ultimately that it is too short. Too little time is spent developing the characters and their formative experiences, so the thought behind them, as well as our ability to empathise with/understand them (delete as appropriate), just doesn’t arrive. Noel’s actual crime and conviction are completely elided, and though I appreciated the visual metaphor of the anonymous office environment quickly convertng into an anonymous prison environment with only minor changes, it was a jarring missed opportunity for the audience to start to care about his ultimate fate.

When the show ended, I thought it was the interval (or as critics call it, ‘free press desk booze time’). I hesitate to spoil it, but it finally felt like the story was about to start going somewhere and the characters were going to show exactly what they were truly made of, perhaps desperately competing to gain the upper hand or hide their misdeeds or something. I’m not so tedious as to demand all works rigidly comply with classical dramatic structure, and even then the play does have a single sentence of denouement I suppose. It seems that the sudden ending was supposed to make the audience appreciate how greed and corruption infect and subsume all they touch and leave no hope, but my own epiphany was an answer to the question that had been bothering me for most of the play, ‘when is this going to start going somewhere?’. The answer; it doesn’t. The quality of the writing isn’t what I take umbrage to. If only there were more of it.