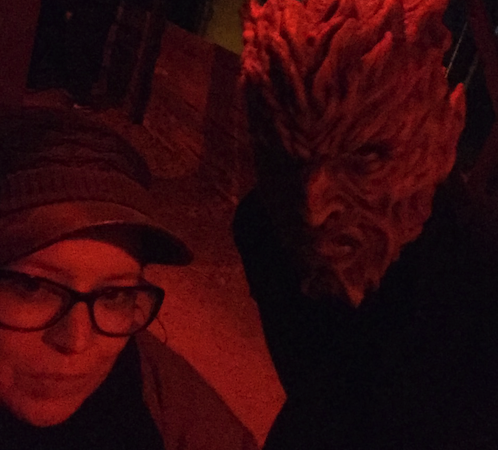 Yorkshire Scare Grounds have been petrifying us for years, but this year for a very special bloody valentines event, this outside theatre with a difference, reaches new heights in their mission to scare! As Stephen Graham Jones once said “there’s no purer feeling in the world than being scared.” VICKI GALLOWAY-PLACE subjected herself to the evil theatrics once again…

This was my third visit to the interactive theatrical event at the Yorkshire Scare Grounds, and every time I ask myself why we put ourselves through it?  What is it about ‘safe’ fear that gives us a thrill?  I don’t know the answer, but as a fan of a good horror or thriller, and as a theatre specialist, I love the combination that Yorkshire Scare Grounds gives the participants.

Not having been to one for a few years, it was heartening to see how the event has evolved, I remember thinking on my previous visit that I wasn’t as scared as I was the first time I attended, It turns out, after reading some other reviews on their Facebook page, that I wasn’t the only one who thought this, Yorkshire Scare Grounds takes its feedback very seriously and responded, making last night’s adventure the scariest yet!

As two single gals, one more recent than the other, this was we thought, the perfect way for us to celebrate Valentine’s Day with a Bloody Valentine scream fest…we weren’t wrong! Kayle my “galentine” date for the evening, on a regular day is a strong, fierce, independent woman, a woman young girls look up to and aspire to be.  This was not the Kayle that I witnessed last night…as my final picture shows! Hiding behind me and every other person she could, screaming at every turn (we both did that!), gripping my hand to the point where I’m sure I have a couple of bruised fingers today…this is what the scare park does to you! It turns perfectly respectable, calm people into quivering wrecks!  And we love it!

The creepiness began before we even entered the park – with the scary devil, in shadow, silently greeting us as we entered.  His still silhouette had kayle running for cover behind me, I (whom I like to think remains calm in most situations), tried to run for cover behind Kayle…but she was already hiding behind me! So we just looked ridiculous to the waiting audience queuing to enter the park!)

The queue for me was the only downfall.  We were waiting in line for a good 30 minutes, and I remember this was the case the previous two times also.  Maybe its the anticipation of what you are about to face that makes it feel longer but once you’re through the gate, you just want to get in to the park itself!

Yorkshire Scare Grounds is situated in a dark woods, literally in the middle of nowhere in Wakefield, conveniently located on Hell Lane!  The satnav doesn’t quite take you to the park, so allow time for that, but the setting is perfect.  I liked that at this event you were given a glo-stick: Green if you felt comfortable being touched by the actors, red if you didn’t or were under 16.  This, we quickly realised was our only source of light! One glo-stick between six of us, another change from the past, no lighting at all throughout the whole adventure.  A bold choice in the days of health and safety gone mad, but the right choice when you are coming somewhere to be deliberately scared.  It was pitch black throughout the park both inside and outside, and as we all know…sometimes what we can’t see scares us the most.

With actors lurking in the shadows and in the corners, creeping up behind you,stroking your hair, screaming and grabbing you at every opportunity, even when there isn’t anything there, you think that there is.  On more than one occasion, I am sure I screamed at nothing!

We fumbled our way through the Cabin of Freaks, checked in at the Hotel Transylvania (which I think we circled three times as we got lost – It really was that dark).  I loved the addition of a movable platform in the hotel, as we entered the lift, after the actor had addressed us and once again we were plunged into darkness, we ‘moved’ to the next level – A great addition to the experience.

The only lighting that was apparent was dramatic reds and greens focused on the actors when then addressed us before entering the next venue.  This year the costumes and make up had stepped up a notch as well as the quality of the acting, although I have to say, I would not be able to tell you a word of their ‘plot’, Maybe because there’s so much going on, maybe because of the adrenaline or maybe because of the soundtracks – which were very loud but effective too, lots of organs playing which all added to the effect. However I didn’t feel like I needed to know what the actors had said, it didn’t affect my experience in the slightest, if anything it was a little breather from my heart beating out of my chest to clam down before the next fright.

As we made our way through the final building Undead on Arrival!’ Medical Nightmares the corridors felt smaller, the characters tried to grab you through their bars. I was well and truly terrified.

Experience tells me that this is a mammoth task to put together behind the scenes, coordinating the groups, excellent timing, improvisation and all the little extras are all part of a very well oiled machine.  Other that the initial queue my only other thought, which is a bit of a double edged sword, is that I know the sets are amazing, from past visits and pictures, but due to the decision to have no lighting, you don’t get to see any (or very little) of this.  But do you need to?  It feels like a shame because of all the hard work that will have gone into the creation of this, but, I also know more lighting would have lessened the effect! No right answer there I suppose!

All in all, Kayle and I loved the Yorkshire Scare Park, I thought it was the best one yet and would recommend it to all those who enjoy being scared! As Kayle said “you get to the end, adrenalines pumping, you laugh, you smile, you think it’s all over…It’s not” which is clear from the picture below, as we stepped into the Photo Booth, pushed the button, waited, waited some more eventually a screen dropped down and we were faced with a horrific clown taking out picture!  Excellent addition! I’ve looked and laughed at this picture all day, a fantastic memento.

The park hosts a few events throughout the year, but obviously their main event is over the Halloween period.  Plenty of time to pluck up the courage and face your fears head on!