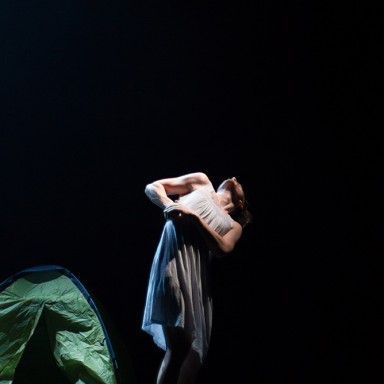 Dreaming in Code is a double bill starting with milk night by Eddie Kay for Frantic Assembly. Given an all-male cast of five, Kay considered the absence of women and how men would survive in a world without them. We see three tents lit up from within by electric torchlight. There is a kind of stream-of-consciousness verbal commentary which is matched in movement by punctuated exaggerated thrusts and flails.

Then the speech stops as suddenly as it begun, while the frantic gesturing continues, if then held back by a dancing partner. This culminates in a flight into midair, with the dancer floating in the darkness, held carefully by his companions. The atmospheric soundtrack is then replaced by lilting swinging jazz and the dancers come out of the darkness to be fully lit.

The two pairs spout gibberish accompanied by fast moves until the outsider in red attempts to talk but is continuously tongue-tied, getting stuck like a record, while another looks at his watch as if timing the ordeal. There are then snippets of conversation and agitated jerks building up to a rest with painful gasps of air.

One dancer is pushed around the group from one to another as if being bullied or rejected. This gives way to a spectacular sequence of flying, falling and leaping and then running, but to no escape. This displays massive trust amongst the performers who create fascinating patterns of dynamic movement.

The soundtrack here includes guitar with digital delay and a cello’s slow refrain that is elegiac and soothing like a balm. This serves as a contrast to the twitching and spasms on stage by one of the performers who is watched by the other four. Light relief and black humour appears in a cheesy disco number which they boogie to but with hands in pockets as if with reticence or shame.

The music is then muffled and they enter into their tents and the only woman in the piece appears, projected on the tent lining. But this image is soon covered, as if to block out the very existence of female presence and its memory. Then one dancer adorns a dress and feigns sickness as if pregnant or hung-over with visceral stomach-wrenching actions. The piece ends in a final embrace, though far from total resolution.

As Tasmin Fitzgerald points out, music, reflections and light form a crucial component of Lucid Grounds. There are five silver mirrored columns, dappled and therefore distorted but still reminiscent of a rehearsal room. The cast are all clad in heavy long jackets which fly in folds of curves with the movement, though the effort of carrying such a load is belied despite such frenetic dance.

The relationship between the music and movement is critical, with split-second timing for the tumbles and leaps that are quite dizzying. They appear like warriors in a gang and can be menacing at times. But there is a calm after the initial storm and we see gentle and more subtle movement too.

Not for long, however, as industrial bass pounds out and a sequence of spins and swirls plays havoc on the stage. The lighting too is critical to within inches with much use of chiaroscuro to evoke mood and add enchantment to the form. At one point there is a solo headstand, mind-boggling given the rush of blood to the head whilst still being directed. This is followed by two pairs who match the rhythmic electro beats perfectly like clockwork.

The pace again slows and the action is set in an orange glow and stillness and the dancers then intertwine and more than ever the cloaks become a part of their art against a cacophony of sound. We are left looking one last time at the distorted reflections like a mirage, that have a beauty and attraction that contrasts to the costumes’ heaviness and the masculine physicality of the troupe.

Dreaming in Code is a spectacular show that reveals great talents in all aspects of its production. The narratives are quite subjective but these ideas of gender and memory are universal and leave us all reflecting on their depth and profundity.