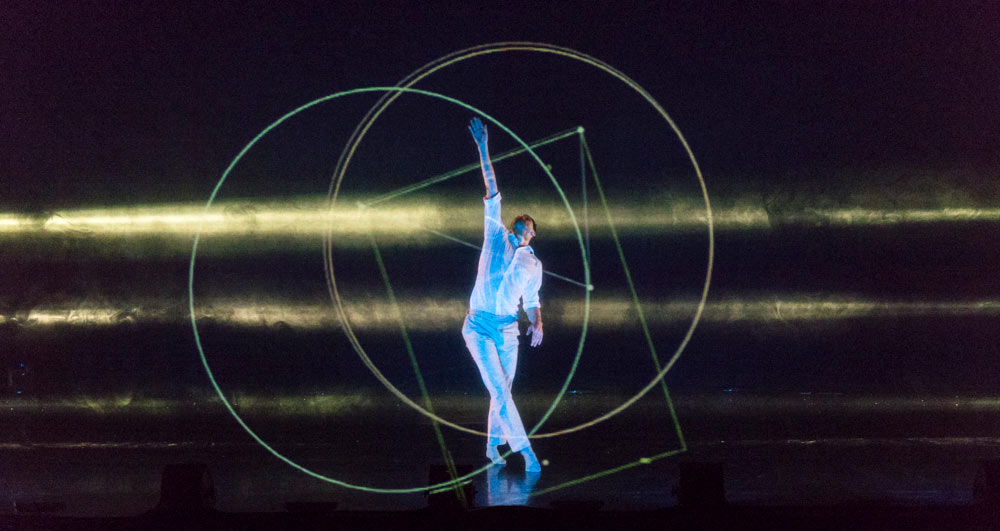 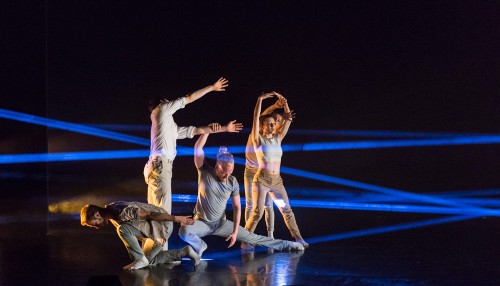 Alexander Whitley’s The Grit in the Oyster starts with a couple in frieze while a solo dancer begins the complex movements that match and explore the depth and profundity of Thomas Ades’ Piano Quintet soundtrack. The title of the piece, Whitley explains, refers to the abrasive and dissonant nature of the sounds which go through a process which softens their initial harshness.

The dancers move in ebbs and flows with some quite classical moments included what is an essentially modern form. If there is a direct narrative it would be one of female rivalry with the male dancer moving from one partner to another as if reinforcing that old chestnut, ‘two’s company, three’s a crowd’.

There is a dynamic use of the space with long shadows artfully cast across the stage. There are repeated motifs that strengthen and heighten the intensity of the piece’s dramatic force. One nice touch is when a female dancer changes her top into a white blouse which also goes hand in hand with a change in her movements.

Working with its soundtrack perfectly throughout just as the music ends so does the dance itself, quite abruptly. The stage is cast into darkness following an exhausting and demanding performance from the three dancers. 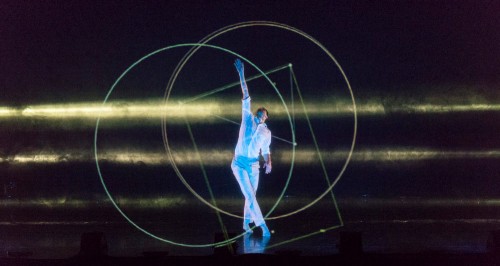 The Measures Taken is named after the way the tracking devices around the stage interact with the shapes made by the dancers. This starts with sharp pinpricks of light high above the solo dancer with a single click track to create a beat for the movement. Then the beam lowers and the soundtrack becomes more atmospheric with soothing rippling water and grating squeaky balloons amplified to an irritatingly loud level, deliberately to shock and surprise the audience.

The five dancers exhibit flamboyant and extreme gestures that are mirrored between them. The sound of a hypnotic drone swirls around the space and piercing strands of light a projected onto a thin mesh at the front of the stage. With suspension of disbelief this makes for a quite enchanting illusionist trick.

A myriad of beams cleverly capture the dancers in chiaroscuro during their dizzying movements. The use of interactive lighting reminds you of a sophisticated laser alarm system or an instrument invented by Jean Michel Jarre for synthesised sound except here the result is visual rather than aural.

The piece peaks with geometric shapes reflecting the dancer’s positions and movements and although this does dominate our experience it is still grounded in the body and its function. Whitley’s approach is innovative and inventive and his company attain a high bar in the quality of performance that complements its immaculate staging. What is particularly poignant is the use of dance, light and music to produce a powerful and profound piece that is more than the sum of its parts.