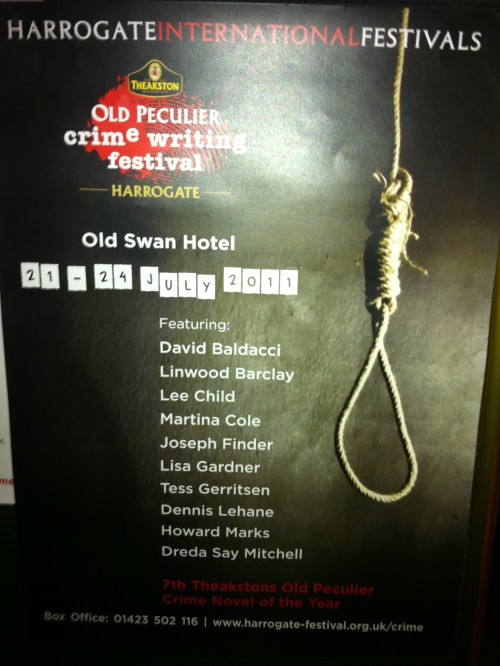 Guest blog from Maria Barret, one of our two winners of weekend passes to Theakstons Old Peculier Crime Writers Festival in Harrogate

I love conferences. There, I’ve said it. I love going to them, I love managing them, I love devising them. Heck, I don’t even mind speaking at them. And I am a huge fan of crime writing. From Wilkie Collins through Poe, Sayers, Christie, Hammett, Chandler to Ellroy and Lehane, I love them all. So a weekend at Theakstons Old Peculier Crime Writing Festival was right up my dead end street. And did I say I don’t mind a pint either?

This was my first ever time at the Festival and it was a bit daunting to turn up at The Old Swan Hotel in my black silk frock and Lulu Guinness shoes all on my own for an awards ceremony and a party. I didn’t know anyone! This concern lasted until I got there, and was immediately dispelled. Luckily, we live in a world of social media and I had met a couple of people online; fellow blogger @keithbwalters is a regular festival goer and told me all I needed to know about the weekend, and ace PR consultant Liz Hyder (@LondonBessie) took me to her heart and looked after me. More than that though, Theakstons Old Peculier Crime Writing Festival says it’s the friendliest literary festival and that is really true. People come over and talk to you, don’t mind if you go up to them and start chatting, and really mixed groups emerge, with famous writers, emerging talent, publishers and PRs, and crime fans like me all chatting together and planning which sessions they will go to and discussing issues brought up by the panels and interviews. And all of this over my first ever pint of Theakstons Old Peculier, which slipped down very nicely and was soon followed by a second. And, ahem, a third.

This friendliness continued throughout the Festival. The demographic was really wide, and one that many an arts event would be envious of. There were adults of all ages, a group of older people who could have come straight off a genteel package tour beside Miss Marple, some of them using mobility aids; lesbians were far from invisible, gay men were serious and partied, black writers chaired events and appeared on panels, publishers mingled with the rest, unpublished authors were rarely bitter, and readers, while fierce about the killing off of their heroes, hardly ever behaved like Misery’s Annie Wilkes. There were people from all over the UK, from the US, from Scandinavia, and of course some dour Scots (yes I mean you, Craig Robertson). It would be very hard to turn up here and feel out of place whoever you were.

Adding to this very open ambience, the Festival is managed in an entirely laid back way. The events and times are published in a brochure, and you buy a ticket for those events you are interested in, or a whole package. You don’t have to go to everything unless you want to, and indeed some people don’t go to anything, but are there for the social side and spend their time chatting in one of the Swan’s bars or out on the terrace with a pint of the Theakstons or a nice cup of Yorkshire tea. All of the events are run one after the other in the same space with a buffer time of about 30 minutes. There is none of the usual conference anxiety of parallel events where you want to go to both (or neither), and none of the attendant confusion of where to go to next. No-one rings a bell or harries you to go anywhere; you note your time and you go and wait. Some events were very busy; the queue for the erudite and funny Howard Marks was huge for instance; but it was quickly dealt with and I think everyone got in. There is usually no need to actually queue in fact unless you are very keen on getting a front seat. Personally I’m a back seat sort of a gal (and the Internet access was better here and I had much tweeting to do), so I could pretty much pop in when everyone else had sat down. There are television monitors at strategic points so that your distance from the stage is not really an issue. And you are very much in the same room as Mark Lawson, Tana French, Howard Marks, Mark Billingham, Dreda Say Mitchell, Martina Cole, PD James…more than 70 of the world’s most celebrated crime authors means the list goes on.

The events themselves are varied and imaginative. This year there were several panels which each brought together four writers with a fab host. For example, Mandasue Heller, Denise Mina, Craig Robertson and Alex Wheatle talked about their complex anti-heroes, chaired by thriller writer James Twining. This discussion ranged everywhere, with feminist Denise Mina standing up for violence in crime fiction – “I like a bit of gore! I’m not buying books about cats!” but also exhorting writers to “stop writing about sex workers getting chopped up”; it is a cliché that helps to objectify women. Robertson was apologetic about having done this in one of his novels; “Well just don’t do it again. That’s all I’m saying!” retorted Mina. Mandasue Heller claimed that there has been an increase in violence on women by women, which should be dealt with in crime writing. Twining asked Wheatle why black people are so underrepresented in crime fiction. “Publishing in London is too white, too middle class – because the entry level pay is so low”, Wheatle answered – and I heartily agree, this (and the related issue of unpaid internships) is a problem the arts as a whole really has to face up to. The existence of evil was discussed, and Mina suggested looking at taboos to find new areas to write about, for instance the difficulty of a raped man being able to report it to the police was a good alternative to yet another female rape in a novel. Heller countered that it was still not easy for a woman to report rape, and you could have heard a pin drop when Heller went on to speak candidly about being violently assaulted herself as a teenager. “I didn’t even tell my mum”, she said, “because I thought it was my own fault”. It is this combination of issues, writing tips and close insight into the writers’ lives and minds behind their books that makes this event really special.

There were also some fab double acts; David Baldacci and Joseph Finder in particular deserved their own show, they were like a younger, more suave Staedlter and Waldorf. They were in their element talking about the research for their dark thrillers, including stories about trying out a funeral casket from the inside and Finder avoiding a meeting in Moscow as they thought he was a Fed and were going to kill him.  On the Saturday there was a dinner for the 75th birthday of MC Beaton, the creator of Hamish Macbeth, and this involved an extended game of criminal consequences. Afterwards, Lee Child shared all of his crime writing hates with us in a format borrowed from Room 101 which was chaired by the Independent’s Christina Patterson. Child, who claimed he cared about shoes but not suits, was dressed in a suit that cost more than my car, and Patterson was blonde and resplendent in a red dress. Their chemistry sizzled. This was followed by a late night crime writing quiz hosted by Dreda Say Mitchell and Mark Billingham, and there was a board where you could add your name to a team, perfect for those who didn’t know other people attending. It is hard now to believe this all happened in one evening. Finally, on the Sunday, came the last session, and my personal highlight. Dennis Lehane was witty and urbane and talked not only about his novels and subsequent films, but about his work on The Wire, and how his life changed when he became a dad. Again we had that fabulous combination of personal insight, motivation as a writer, and in this case a glimpse into the competitive worlds of film and television.

And of course you couldn’t ask for a better setting. The Old Swan Hotel is not only ‘Victorian splendour’, it is of course the hotel where Agatha Christie was eventually discovered after disappearing for eleven days in 1926. She had checked in to ‘The Swan Hydromat’ under the assumed name Teresa Neele, even more intriguing in that Neele was the name of Christie’s philandering husband’s lover. It is fabulous to walk in Agatha’s footsteps through The Swan’s revolving door, along the corridors and into its ‘famous glass-ceilinged Wedgwood Restaurant’, and try to imagine what she was feeling and why she was there. If you’re very suggestible that is. And why would you read crime fiction if you were not? This makes it a very atmospheric as well as comfortable and in fact quite beautiful venue for all the crime writing events.

There is of course loads more I could say, but you’ve probably had enough of me now. Don’t take my word for it anyway; corroboration of my whereabouts is available on various blogs and websites that can give you more idea. Keith B Walters’ is a thorough, blow by blow account with some good pics, Nicola Ford also has some insight into the very beautiful Harrogate  and I like this very nicely written one which evokes the atmosphere nicely http://clairemcgowan.net/2011/07/25/room-for-one-more/ by Twitter’s @inkstainsclaire. And you can check out the Twitter feed while it’s still there – hashtags #theakstonscrime and #Harrogatecrime2011 were very much used. To find out the official view and a list of all the events, go to http://www.harrogate-festival.org.uk/crime/. This is also where you can book tickets for next year. Do it now, before they sell out – next year’s is chaired by Mark Billingham and features Harlan Coben, John Connolly and Charlaine Harris. You know you want to. I know I do. See you there!

Next year: a tweetup.