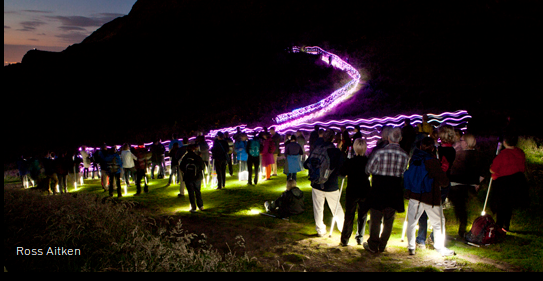 Kat Morse on trying to manage working full time, being a mum and making the gruelling rehearsals for Ghost Peloton …

A couple of years ago I went up from Otley to Edinburgh to take part in this thing called The Speed of Light. I got back to my mate’s flat really late, high on endorphins and the camaraderie of running in a group around the rugged rocks of Arthur’s Seat, late at night and all in light suits! I had a fabulous evening, I was really lucky to be assigned to a group repeatedly running up the slope on the far side of the valley, so got to see parts of the main performance. It’s one of those moments that stays with you forever.

So when I saw that NVA were planning The Ghost Peloton I just had to apply! It’s in my home city, as part of the 100 days of tour celebrations for Yorkshire Festival 2014. And the prospect of whizzing about in a light suit again, only this time on my (new shiny) bike, meant I couldn’t resist! As an ex-dancer it’s a thrill to work with Phoenix too. So despite the tension of being a working mum and the demands of the rehearsals I got straight in touch with Sustrans.

It’s all turned out to be very different from Arthur’s Seat. That was an extinct volcano with a breathtaking view across a historic city. By contrast, Waides Yard is undoubtedly an urban, post-industrial setting. Part of an extinct brewery overlooked by a mixture of both Victorian and modern buildings. It’s no less thrilling though and it’s still pretty breezy, especially when we are stationary; sometimes it feels as bracing as the summit of Arthur’s Seat!

The challenge in 2012 was maintaining an even place and spacing on uneven ground over time. The challenges at Ghost Peloton are to navigate where there are no paths – it’s a more akin to commuting in fast moving traffic than riding a bit of trail. We have to be tightly drilled, maintain focus and not get distracted by the spectrum of colour whirling around us…. you really have to be alert! The first technical rehearsal with light suits looked amazing, it’s a wonder we didn’t have a crash.

I’m both looking forward to the final week, and dreading it. I’ve been riding a bike for 40 years – it’s part of my life (I *only* have 5 bikes and half a tandem…) But it is only *part* of my life – I’ll be commuting (by bike), working 9-5, then rehearsing in the saddle from 6-10pm for 7 days out of 8, and I’m trying to be a mum too! That’s a multi-tasking challenge that might beat some pro riders. I just hope that it doesn’t beat me.