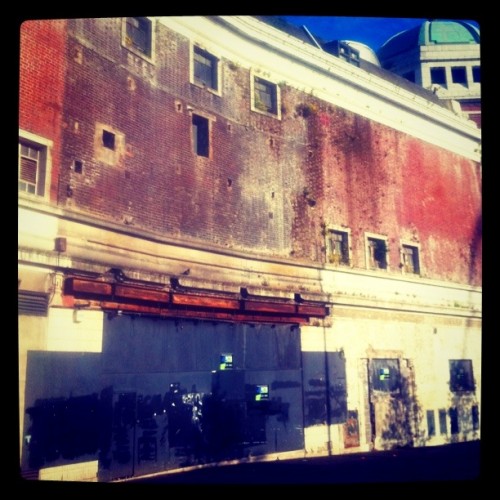 The Soul of the City – by Damien O’Keeffe

There are some buildings that fulfil an important role in the fabric of people’s lives. Depending on one’s viewpoint and experience, a solid argument could be made for any number of buildings – churches, schools, hospitals, libraries etc. Indeed, architects would certainly argue that all buildings are important else why build them in the first place? However, there are some buildings which hold a more central place in people’s affections; I can’t imagine too much protest over the demolition of the local tax office.

In Bradford one such building is the old Odeon Cinema. Originally built in 1929, the New Victoria theatre was an imposing art deco building that was, at one time, the third largest cinema in the country, boasting a ballroom, restaurant and 3000+ seat auditorium. In the 1950s it became part of the Gaumont circuit, attracting top names from the rock and pop world including Tom Jones, The Rolling Stones, and The Beatles. Famously, John Lennon found himself in need of a dentist whilst in Bradford, and nipped up Thotnton Road to attend a local surgery between the matinee and evening shows. A refit in the late 1960s covered up much of the Odeon’s splendour but, thankfully, many of the original fixtures, features and fittings remain behind stud walls and breezeblocks. A detailed history of the building, along with images from its heyday can be found on the Bradford Odeon Rescue Group website.

This was the cinema where I first saw Star Wars, queuing around the block to get in. I saw The Spy Who Loved Me at the Odeon; saw my first ‘A’ rated film – we sneaked in to watch Kramer vs Kramer having paid to see Pete’s Dragon. I was here when a cinema full of skinheads, scooter boys and rude girls moon stomped in the aisles as the film Dance Craze played on the screen. It was here that I saw Close Encounters of the Third Kind. It was here that I had my first close encounter of the teenage kind during a showing of Mannequin!

Even when the owners decided to maximise profit by splitting the big auditorium into two, then three smaller screens, the magic continued. When my wife and I first got together, some of our earliest dates were at The Odeon; we took our son to see The Tigger Movie, his first big-screen experience; all milestones in our family’s shared history. These experiences are multiplied across the many tens of thousands of other Bradfordians who used to go to The Odeon.

The beautiful building remains, slowly rotting through neglect whilst around it other construction sites throw up modern glass and steel office blocks and anonymous chain hotels that literally reflect the shabbiness of this once great palace of entertainment. Just a few metres away across the busy dual carriageway that slices through the city centre, the City Park nears completion. This £24m development will give Bradford the largest city centre water feature in Europe. It comprises approximately six acres of paved and landscaped walkways that can be flooded and drained as required. More than a hundred controllable fountains will play, creating dynamic water sculptures, beneath the six, reed-like floodlights that will illuminate the space at night.

Now, I am an optimistic person and can already see some benefits from the City Park development, not least of which is the opening up of the skyline across the Centenary Square. Now it is possible to look from the stunning Italianate City Hall building right across to The Alhambra Theatre. The Sixties brutalist home of The National Media Museum looks down from one side, whilst from the other stares the modern edifice of the Provident Financial building – several eras of architectural style collected together. But slap bang in the middle, like a derelict and decrepit dowager aunt, sits The Odeon. Incongruous, neglected, but stubbornly still there.

The Council have shown a woeful lack of vision regarding the Odeon. Where other cities would have capitalised on the architectural harmony between The Alhambra Theatre and the Odeon, creating a cultural quarter for the city like Sheffield has done, Bradford Council have hesitated and capitulated as property developers and private financiers have paraded one unwanted or unworkable scheme after another through the planning office. As everyone’s attention was drawn to the ill-considered and ultimately ill-fated Westfield development planned for the site of the original Forster Square, the Odeon was quietly sold, only to be left to crumble. Very few Bradfordians actually thought we needed a new shopping centre (the Forster Square Retail Park – as soulless as it sounds – had driven a stake through the heart of the City’s central shopping area already) but pretty much everyone who was asked or who offered their opinions wanted the Odeon to be saved.

So what happens to a city’s collective memories and experiences once such a place is pulled down? And how do those people feel when their opinions are sought only to be ignored? When they have clearly expressed their wishes regarding the future of the building, through letters to the council, representations to English Heritage, and through a large-scale public demonstration of their support for it, and for all of that to be disregarded; what then?