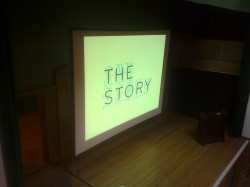 Above the stage at The Conway Hall in London there’s the famous quote from Hamlet, To Thine Own Self Be True. These words are spoken by a ludicrous and pompous character in a work of fictional drama and only the very worthy and the spectacularly literal take this fatuous piece of faux wisdom seriously. Regrettably there seemed to be quite a few Polonius types at The Story Conference last Friday if some of the coffee break talk I overheard and the subsequent blogs are anything to go by. I actually heard one woman moaning at lunch about taking a day off work! She complained that she seemed to be listening to a lot of stuff that people had randomly made up, and whatever would her boss think about her returning without some “actionable information” about how to use her newly acquired narrative knowledge to impact the bottom line. Some people just don’t get the point.

Matt Locke, the organiser of The Story Conference, explicitly advertised the event as a celebration of “the visceral pleasure” of story telling. No teaching, no preaching, and definitely no theory, just the fun stuff. And that, fabulously, is more or less what we got. Speaker after speaker stood up on stage to spin an unlikely story, tell a tall tale, or simply pull a fast one. Nobody attempted to educate or edify. And though there was the one lapse into a lecture, when Kat Akingbade phoned a friend from the podium and then held her mobile to the microphone while some poor chap on the other end rambled on about why some people believe silly things . . . She’s a very savvy woman, she works with Derren Brown for heaven’s sake, so why she thought that would work is a bit beyond me. And there was one slightly worthy attempt at moral uplift when the fellow from Livity, a self-confessed “middle aged, middle class, marketing wanker” told the story of Jody McIntyre, a young guy with cerebral palsy in a wheelchair who was taking on the world . . . a great story, but a bit too insistent on labouring an obvious point for my tastes.
It would be impossible to chose one highlight from the day, there were so many fabulous moments. I loved the fact that Jon Spooner irritated the sensible minded with his hilarious and demented riff on the science of coincidence, not one word of which could possibly be true. Tim Etchells was superbly rude, lewd, and very crude with his list that was not even a proper story, of Hollywood stars in improbable situations, mainly inserting Oscars into various orifices and liberally distributing bodily fluids around the place. And Stuart Nolan, a man who really can visualise a horse galloping on a tomato, made the audience gasp and squirm with his incredibly clever prestidigitation. For me this was exactly what the day was about, the magic and mystery and mayhem of stories. We knew that Stuart was not really going to slash his wrists with that cut-throat razor and spatter the front two rows with gush after gush of hot arterial scarlet if he guessed the coin wrong . . . we’d been had! Enjoyably, excruciatingly, fascinatingly conned into a make believe world that Stuart had constructed for us. And we all happily fell for it. Marvellous!
The Story Conference was a complete and utter waste of time. It was wonderful. I can’t wait for the next one.