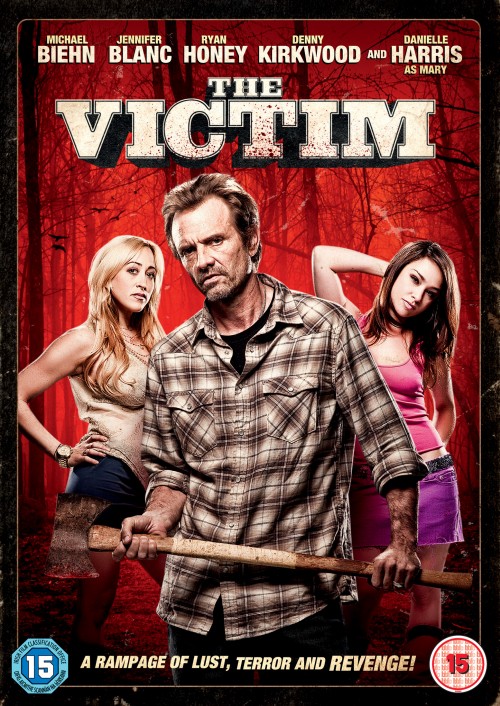 Having starred in Planet Terror, actor Michael Biehn was inspired by Rodriguez to try his hand at grindhouse. “You can either have life and take it by the balls or be a victim,” reflects one of the characters in his second feature, The Victim, perhaps reflecting Biehn’s own mantra. With end credits thanking “Robert” for the inspiration, Biehn is clear in his intention and a combination of pulped heads and gratuitous sex scenes ensure The Victim does exactly what Biehn set out to do.

Supposedly based upon true events, The Victim tells the story of a young girl who witnesses a horrific crime and finds shelter from two corrupt local Sheriff Deputies with a mysterious recluse. Biehn opens the film with a nauseating sex scene that looks far from enjoyable before utilising a shaky hand-held camera to capture disorientated footage of his heroine, Annie (Jennifer Blanc), on the run.

Kyle, the recluse, is first presented riveted by self-help videos and breezily telling a waitress he always has a good day. As Kyle, Biehn almost seems too calm to be believable, unsurprised when Annie appears on his doorstep, implying he’s plagued by daily visits from distraught beauties. As the plot thickens and Kyle’s dubious troubled past comes to light, it’s clear he’s a man of dark secrets, suggesting Biehn’s early performance was perhaps perfectly pitched after all.

Flashbacks to the girls talking before they “partyed” and everything went tits up (quite literally), work well in creating tension. Although Biehn achieves the trashy TV movie effects he undoubtedly sought to create, not all of The Victim works – dire night time driving scenes set to slushy tunes are far too common and all unnecessarily drawn out, considering the film’s exceedingly modest running time. There’s a particularly awful sex scene set to cheesy country rock music and the union of two of the leads feels painfully forced, prompting you to cry out in agreement when Kyle asks “What you doing?”

Biehn ‘s script is suitably grubby with Deputy Harrison (Ryan Honey) favouring cliched dirty talk (“You like it anywhere – dirty girl….Bet you like it hard, don’t you?”) and his heroine punching back on a similar level (“It’s hard to be a tough guy when you’re only packing four inches”). As Harrison, Honey is given the best line, asking Kyle if he likes his meat “rare, medium…” while torturing him.

With its “Medieval” and “old skool” torture scenes, The Victim is violent viewing and occasionally feels like a masculinity contest, exposing the gullibility of sex-driven men. Despite The Victim’s generally uninspiring script, Biehn manages to avoid having a painfully cliched heroine and instead refreshingly writes a female lead with logic. He keeps you guessing with the inclusion of a parallel murder mystery plot, tracing the disappearance of four young girls. His ambiguous and slightly predictable ending is accompanied by overly dramatic instrumentals and slapstick music reminding viewers not to judge too harshly a film that clearly doesn’t take itself too seriously.