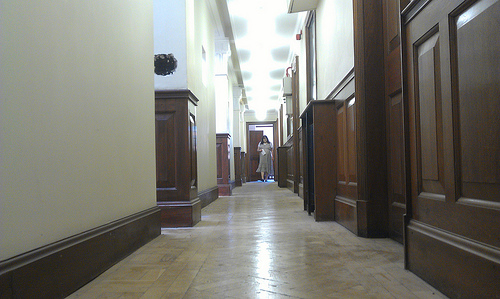 Tetley’s brewed beer on Meadow Lane from 1822 until 2011 when last orders came quietly with a little knot of satellite vans and a flag at half mast. It was a vast site, but they wasted little time stripping out the equipment and grinding the biggest buildings to dust. Now all that remains is the 1931 headquarters block, a bodiless head poking out amid the rubble.

But what a head!  The Depression Era Tetleys didn’t, as the later slogan went, do things by halves. One gets a sense that as with the Civic Hall up on the moral high ground of town this art deco gem in the manufacturing underbelly was an attempt to out-build the downturn.

It may not be obvious from the exterior though because this is the antithesis of South Leeds’ other post-industrial poster child. Temple Works is all facade. “Look at me,” it shouts to the passer-by on the grim streets of Holbeck, “I’m a fucking Egyptian Temple!” Grade I heritage status nailed on.

Tetley’s HQ by contrast is neat, unassuming brickwork on the outside. You have to push the brass plate on the beautiful revolving door to see why it’s a crime that this place remains unlisted. Stepping inside, a steady flow of Heritage Open Days visitors were able to appreciate just what this company stood for at the height of its powers, when even city councillors judged its product to be “the most popular brew in the view of the Corporation”. In the panelled entrance hall, memorials to the workers who died serving in the two world wars, erected they say “in their honour by their grateful employers”. Straight ahead, the deco centrepiece of the original scissor-lift. It’s a beast that looks frightening to operate sober, let alone after enjoying the free bar that apparently blessed the building in its heyday.

Winding round the lift, the original staircase takes us up to the well appointed office floors and onwards to the most surprising space I have seen in the city in a long time. Seeing the sun stream in through the roof lights onto a double-height hall it’s easy to see why Project Space Leeds are so eager to get their hands on this place for a gallery. It was heartening on the open day to see PSL eager to engage with the building’s history and to hear the stories of those who worked and, by all accounts, played there. A place with this much architectural and narrative capital deserves to be treated as the opposite of a blank canvas.

It’s going to be brilliant, but not yet, for the building is to be refurbished ahead of the gallery opening in the Spring of next year.

Thanks, in the mean time, to Heritage Open Days and Project Space Leeds for letting people have a peak inside this place at a moment of transition.