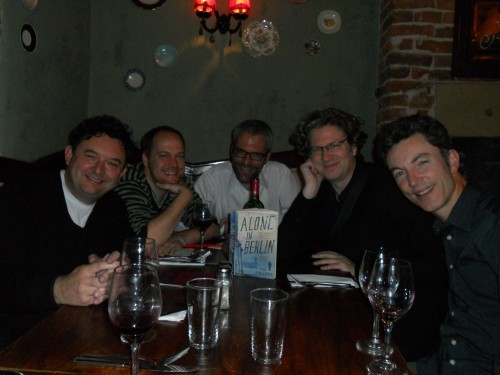 Aren’t networks wonderful? Recently a men’s book club in Leeds asked the incredible Culture Vulturess to help them crowd source their next book for discussion.When I say ‘men’s book club’, women have been known to cringe or say ‘Ew’ or words to that effect. Let me clarify. They don’t read ‘men’s’ books – not smut, not stereotypically ‘male’ action hero, guns ‘n’ grenades books. They’re all men, that’s all. Middle aged, mostly middle class men (their description, not mine) who wanted to do something constructive and intellectually stimulating some of the time.

Somewhere along the line the idea came up that they should also invite a guest – maybe even (shock, horror) a female guest. Emma suggested me, as I write books, read a lot of them and – yes, though it pains my female vanity to voice it – am of the same age and social class as the book club chaps.

The crowd-sourced book was ‘Alone in Berlin’, which I dutifully reread, demonstrating my dedication to duty and unquenchable desire to be, if not top of the class, at least Swot Numero Uno. Tough call with these guys, as they take this book club business very seriously. OK, so they meet in the pub and drink lots of wine. Yes, they have a good laugh and chatter about their lives, work, families etc but that’s not the point of the whole endeavour.

What they do is analyze books in a highly structured (some might say rather male…) manner. There are rules, you see. First, members must read the book, on pain of death – or at least opproprium, which to my little nerd mind is worse. Second, everyone scores the book out of ten at the beginning of the meeting. Third, each person gives their review without interruption. Finally, everyone reflects on the score they initially gave and adjusts it if they’ve been swayed by comments from other readers.

Discussion of ‘Alone in Berlin’ was in-depth, detailed, lengthy (hurrah for table service!) and at times quite passionate and complex. There were some extreme differences in the views on the quality of the translation, the characterization, the plot (some thought it was genius while another thought it was utter rubbish). There was wine, hilarity and swear words. Forget those trendy, over-priced bars in the city centre; this is what I call a lively night out.

So, what did I learn from my evening with the fabulous book boys? Well, the structure worked brilliantly. I’ve been to book clubs before where everyone ended up talking over each other in their enthusiasm to share their thoughts. These were fun too but this time I definitely felt I learned more about both the book and the way I interpret fiction than I have in the past.

I also discovered that this particular men’s book club hasn’t given much consideration to the way female characters are written before. They happily did so when I raised it and began to engage too with the way relationships are constructed in fiction, something they said they hadn’t really done before.

They also told me that, while the book club provides intellectual stimulus and challenge, it also serves an important personal role. The books that they’ve read over the years (they’re now in their sixth year) have occasionally provided a springboard to discuss things going on in their own lives, good and bad, which they said would never happen in different settings, even with close friends. Women, they felt, chat freely about emotional highs and lows, men not so much.

Finally, although they thought they had a fairly even male/female balance among authors, they realized that only one of their eleven books this year was written by a woman. So I recommended ‘A Thousand Acres’ by Jane Smiley. Can’t wait to see what scores they come up with for that…

The club is looking for a new member and have been thinking of each inviting a guest in turn. I’d suggest also throwing it out to Culture Vultures occasionally; hanging out with these guys is a treat that should be shared around a bit – brain fuel and good fun. What more could a girl (or boy) ask for on a night out?