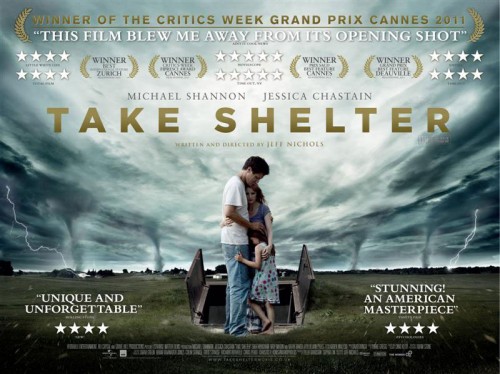 Take Shelter has created a stir amongst audiences and reviewers alike. It scooped up the Critics Week Grand Prize and the International Critics Prize at Cannes earlier this year and received nominations for the Grand Jury Prize at the Sundance Film Festival and the award for Best Ensemble Cast – which includes Michael Shannon (Boardwalk Empire) and Jessica Chastain (The Tree of Life) – at the Gotham Film Festival. Only the second feature film from writer and director Jeff Nichols, Take Shelter is a sign of great things to come.

Curtis LaForche (Michael Shannon) has a good life. He is happily married to loving wife, Samantha, and holds a steady job at a local sand-mining company. They have a modest home, enough to cover additional education for their deaf young daughter, Hannah, and, with a bit of scrimping and saving, can to afford the implant she needs to restore her hearing.

When Curtis begins to see terrifying visions of looming dark clouds and tornadoes he is unsure whether they are portents of disaster or something far more terrifying. As his visions tip over into nightmares which then spill into his waking hours, he privately prepares to protect his family for parallel possibilities: that he is succumbing to the same mental illness that consumed his mother and his childhood, and that there really is an apocalyptic storm coming to devastate his hometown. But Curtis’ unusual actions threaten to jeopardize his marriage and alienate him from his community—the very things he is so desperate to defend.

Shannon gives an outstanding performance as Curtis: a gentle giant, stolid, enduring, with a tempest building up behind his furrowed brow and a dark fragility carrying the potential to snap at any minute. Chastain matches him for quality as the well-rounded Samantha, cementing the plausibility of their family life and underlining just how much Curtis stands to lose.

Nichols purposefully blurs the boundaries between Curtis’ reality and hallucinations until his uncertainty becomes ours. As witnesses to the mounting damage that Curtis does to his family and friendships, we are torn between desperately wanting the best for and from his character and fearing the worst. Nichols has us examining every moment and scouring the vast Ohio sky for clues of the truth. The unbearable tension he builds is in fact our experience of Curtis’ fear and dread as his reality crumbles.

Take Shelter challenges expectations of a film that is part disaster movie, part psychological thriller and part supernatural horror. Rather than defaulting to the easy scares that come as part and parcel of its genre, Nichols instead crafts an intelligent masterpiece that dodges presumptions until the end and is all the more powerful in its elegant simplicity. This deserves to be a Festival Favorite.

Watch the trailer at the Take Shelter film site.

Take Shelter was shown as part of the 2011 Leeds International Film Festival ahead of is UK release on the 25th of November.

For more information:
The official website for the Leeds International Film Festival is www.leedsfilm.com. The box office number is 0113 224 3801. The LIFF25 Box Office is located in The Carriageworks, located on Millennium Square, Leeds. The box office is open from 10am – 6pm Monday to Saturday and on Sundays when there is a performance at The Carriageworks. Advance tickets and passes can be purchased either online, by phone or in person.

Josephine Borg is a newly northern, back-rubber extraordinaire. She offers Hawaiian Lomi Lomi massage to the good folks of West Yorkshire, along with a brew and a slice of homemade cake. You can find out more at www.lomimassageleeds.com or by following her on Twitter @ilovelomi or Facebook.