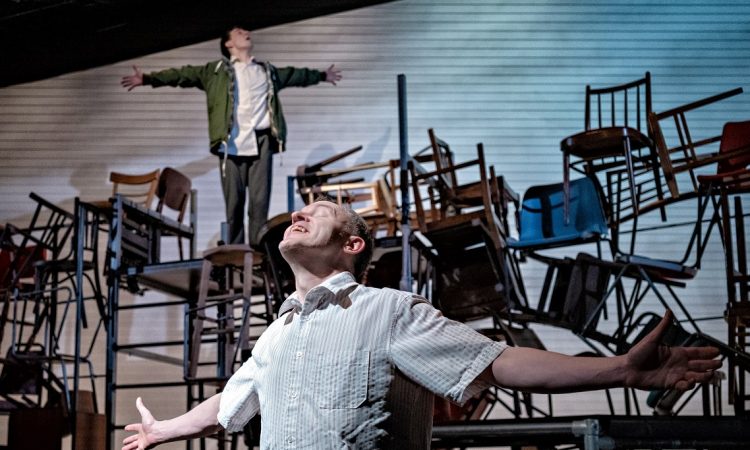 Fifty years on from Ken Loach’s celebrated film, KES at LEEDS PLAYHOUSE shows that the tale of a boy and a kestrel has lost nothing of its emotional power. RICHARD HORSMAN was there.

Barry Hines’ novel ‘A Kestrel for a Knave’ was a familiar sight in many northern classrooms in the seventies. As a way in to the delights of English Literature it was relatable, accessible .. and short.

Ken Loach’s film brought the story to life on the screen with memorable performances from Brian Glover, Colin Welland – and Bernard Atha, the Leeds actor-turned-Councillor and former Lord Mayor without whom there may never have been a Leeds Playhouse. He was a big part of the campaign to set up the original venue in a sports hall on the Leeds University campus.

The power of the story comes from contrasts. The bright open sky, and the confined dark hell of the pit. The soaring imagination of a young boy, and the defeated resignation of the adults who surround him. None is a real villain. The brutality of a schoolmaster, quick to reach for a cane, driven by inadequacy, yes, but also a fierce desire to keep the boys in his charge out of the mine.

Even elder brother Jud, who brings events to a tragic climax in a fit of rage when Billy Casper fails to place his winning bet at the bookie’s, is tortured; the paltry winnings would have allowed him to take a week off work and enjoy brief pleasures at the seaside or in the pub.

Lucas Button in the role of Billy must take us through the boy’s journey, and he’s thoroughly convincing as an adolescent in both speech and body language. He makes the part his own, whether he’s training his invisible hawk to respond to the lure, or being the butt of a sadistic sports teacher’s wit.

The kestrel has given a meaning to his life, and his whole manner changes in response to that, as it does when he’s recreating the iconic pose from the film poster at the top of a scaffolding set. There, he’s risen above the clutter and chaos of his life, as represented by heaps of chairs.

Jack Lord as ‘Man’ faces a tough ask; he must represent the older Billy, looking back on events, as well as all the other characters in Billy’s life. The two actors know each other well, having just completed a UK tour together in the WW1 drama War Horse.

He morphs quickly between teacher, paper shop man, brother Jud – even Billy’s mum. The transitions are demanding and generally work well, but some of the subtleties, such as the varied temperaments of different teachers, require a bit of effort on the part of the audience.

The other principal character in the saga is of course the bird, Kes.

She’s realised on stage using techniques in the theatre of the mind, and whilst we may not directly see her as such, she’s a palpable presence when required. Special credit must go to composers and sound designers Tom Mills, who worked on the original Playhouse production in 2016, and John Biddle, who’s adapted the sound for this new staging..

There’s a lot of movement in the show, and re-mounting it in the flat pop-up temporary space means a lot of that movement is now vertical.

This has created a challenge for Associate Director Martin Leonard. Clambering up and down the set works very powerfully in the scenes when Billy is finding the kestrel, or when he’s being chased by a livid brother, but at other times I wished for a bit less jumping on and off the apparatus.

All in all Kes is a powerful, timeless story which has lost none of its impact over half a century.

This production captures the raw emotion of the tale and brings it alive at a time when we could all do with a bit of hope and escape – whether from the winter chill, or the more pervasive despair of our present national mood.

random, directed by Gbolahan Obisesan and starring Kiza Deen, follows an ordinary family hit by a devastating loss. Staged alongside Kes, it gives audiences the opportunity to experience two powerful stories in one evening.