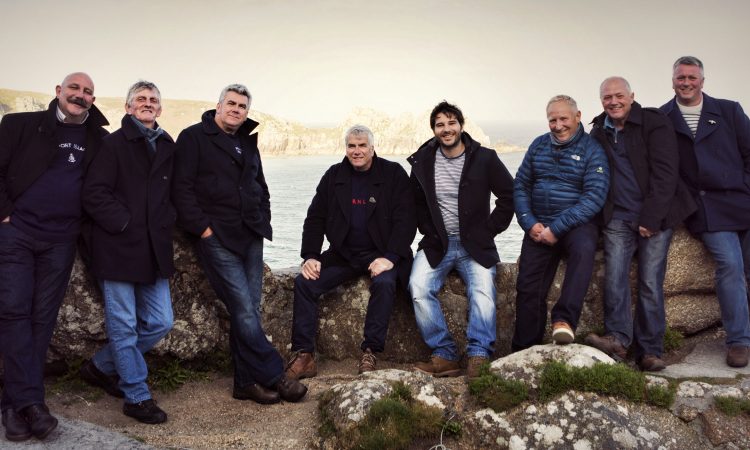 With the Cornwall fishing village where he lives clad in its first snow for years, Jon Cleave, of folk band Fisherman’s Friends speaks to me in his jovial Cornish inflections.

“We weren’t expecting this snow, we were told on the forecast we were gettin’ rain, but I opened the curtains this morning and there it was. First we’ve had for ten years. The village looks very pretty.”

Already well into their forties, Jon and his band were not expecting stardom to come their way either. An ITV documentary of their rise to success drew such attention that a film biopic inevitably followed, due out in March.

“Most of our lads are from near Padstow, North Cornwall, though for the sake of the new film and our first album [the Gold selling Port Isaac’s Fisherman’s Friends] we like to keep up the pretence we’re all from Port Isaac! A lot of the houses round here are of sea-faring heritage – I’m fortunate to Iive in an old sea captain’s house.

“We’ve always been singing together since childhood and in the same fishing community. There’s a tradition of gig-racing or pub-racing round here, and in 1991 we started getting involved in that. We started off learning some of the old Cornish songs and sea shanties. By the mid–1990’s we’d started up Fisherman’s Friends.

“We used to have top-tenors, second tenors and baritones, creating a lovely, rich sound – we have always been natural harmonisers.

“In 2009 we were invited over to Eastern Seaboard Festival in the States and were seen by an independent producer. It was then that we got a manager [Ian Brown, but not that Ian Brown]. I remember he had a driver who had leather gloves, and looked a bit craggy, like he was Ian’s protection! Then within weeks we were offered recording deals – from Sony, Universal and Island. We decided to sign for Island.”

It’s hard to imagine a group of working-class lads from coastal Cornwall confronted with the bright lights of fame, the kind Pink Floyd warned against in Have a Cigar.

Their manager and his “driver” gave off more than a hint of menace, surely?

“Well, we never chased this,” Jon insists. “We still all work. When we signed for Island we had four lobster fishermen, two retired, a builder and a potter. We turn down long tours and go away when business isn’t so busy.

“It’s lucky that we were all long in the tooth when we became famous – we just do our own thing and keep the industry at arm’s length.”

However, Jon recognises the danger that was lurking.

“I’m surprised there aren’t more casualties in the music world. Even at our age we’ve had a lot of attention. Some of it could have been dangerous if we’d let it get out of hand.

“The strapline to this film they’ve made about us is: Some bands can’t be managed. That kinda sums us up really.

“We play the game on TV interviews and so on, but I think we are Cornish first. No one from the band wants to leave Cornwall, we have nice lives – the fishermen in the band work bloody hard. This is a very poor part of England and we can’t shrug off that slightly wary part of ourselves.”

Jon and his band (there are five survivors from the original eight) attended the same school, which was Methodist. But sea shanties were absent from the curriculum.

“It wasn’t taught at school. I was thrown out of the school choir for being a growler! There’s a big Methodist tradition in Cornwall promoting cheery choral singing in coffee bars. The Methodist chapel was the place to be as a teenager – not so much the God part, just the enjoyment of singing. Male choirs are important in North Cornwall.

“We all learnt choral discipline early on, which is very handy in live and impromptu gigs.”

The range of venues the band have played is impressive. In 2012, they were invited to play for the Queen’s Diamond Jubilee.

“We were asked to blast sea-chanties at her from the deck of the HMS Belfast and she sailed serenely by and gestured at us – I couldn’t tell if she was giving us the bird to be honest!”

There were also invites to Proms in the Park (performing before an audience of fifty thousand) and Glastonbury in 2011. I confess to scratching my head at the idea of a Cornish band purveying sea-shanties on Glasto’s Pyramid Stage. Hardly Radiohead or Bjork.

“One of the band sent the manager half-a-dozen lobsters to bribe him! We were in the 11am Sunday slot and all the freaks were just waking up and coming out of their tents like the livin’ dead! Twenty thousand headed down to watch us and we were banging out whaling songs – mind you, a big part of the sea shanty tradition – and right across the stage there was this big Greenpeace banner!”

Jon is still shocked that Earth, Wind and Fire were their warm-up band for Proms in the Park, and their audience sizes continue to expand. Recently they played at half-time in the England v Australia Test at Twickenham in front of over eighty thousand people. A dramatic contrast to one hundred or so in a Padstow pub.

“I don’t care what the size of the audience is. I love the large audiences, but 300-400 would be my ideal. Smaller crowds are more intimate.

“We were at Celtic Connections in Glasgow last year in The Old Fruit Market which was great, just the right size and a wonderful crowd.”

They have come across a wide variety of famous musicians and presenters on tours.

“Tom Robinson is a really nice guy. We met him backstage at the Albert Hall when we played there [at the Last Night of the Proms]. Ralph McTell is also a nice bloke. And we all get on well with Mark Radcliffe. He comes over and has a pint with us in Cornwall as he holidays near where we live. But we’re not small people and some tend to be a little intimidated by us, we find.”

Besides playing gigs they enjoy, the band are also fortunate to have had a film made of their story.

“We were a bit reticent how we were going to be portrayed, particularly the accents, but we liked it a lot. The director [Chris Foggin] captures the Cornish spirit, and it’s funny. Actors Dave Johns and David Hayman do a terrific job.”

I end by asking if there’s a downside to the razzmatazz.

“Not really – to be honest people are very nice about it. I tend to stick out most of all – I look a bit like Charles Bronson – big bald head and large, luxuriant moustache. I get stopped all the time as I’m often recognised. But we’re respected because we promote the county wherever we go.”

The band are excited to opening their tour in West Yorkshire this spring, particularly Johnny Mac. “Johnny’s very proud of his Leeds heritage, but has lived in Cornwall for over 40 years now. We think he’s one of us, but he ain’t ’avin’ it!”

Fisherman’s Friends are at Kings Hall in Ilkley on Saturday 16th February at 7.30 pm. SOLD OUT. Details here.

Fisherman’s Friends the movie is released in UK cinemas on 15 March.